After arriving in Yangon, popping over to Bago, traveling to Mt Kyaiktiyo, and visiting Mawlamyine, we hopped a minibus to Hpa-an (pronounced pa-aun). I use the term minibus lightly since that is what our guesthouse called it, but the reality is it was a full-sized bus with mini-seats. I swear that SE Asian countries make seats designed for people under five feet (152cm) in height. Luckily, the bus never got too crowded (it was a local bus so it would stop for passengers to get on and off along the way) though it was ridiculously dusty since all the windows and doors were open for the duration of the four-hour drive. 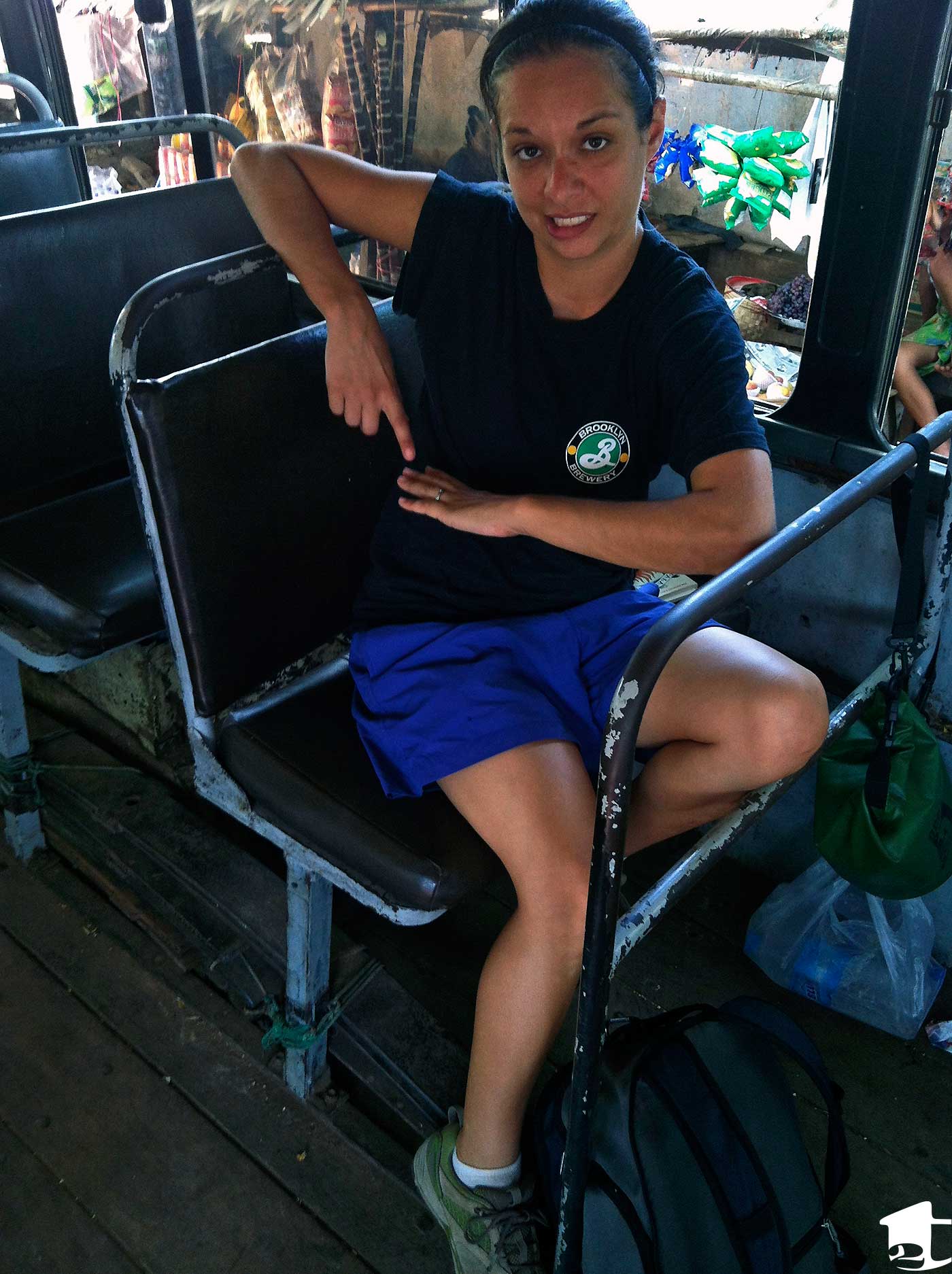 Buses with seats even too small for Tara!

We decided to go this route (south then north) with the expectation of taking a ferry from Mawlamyine to Hpa-An. This ride was touted in Lonely Planet as an inexpensive and beautiful journey, but the ferry does not run anymore. You can hire a private motorboat to do the trip, but at 60,000 kyats (nearly $70USD) it was out of our budget. Sometimes it runs with six foreigners splitting the cost, but only enough people visit in high season. Since we only found this out when we arrived, we had to take a minibus north. The tickets cost a very affordable 1,000 kyats ($1.13USD) per person – a bargain since we did not have to buy seats for our bags like we did Yangon to Bago. Despite not being able to take the river route, the drive was fascinating – flat plains littered with limestone pillars usually capped with golden payas (pagodas).

Most bus station are a bit outside of the city, so we arrived a couple miles from downtown Hpa-an. We flagged down two motorcycle taxis to transport us to Soe Brothers Guesthouse. Everyone knows Soe Brothers, so getting there was easy. Unfortunately, even though we called in advance to reserve the room and once more to confirm it (we were quoted $12USD a night for a fan room with no breakfast), upon arrival we were told there were no more fan rooms and we had to upgrade to an A/C room for $16/night. We pointed to a whiteboard behind the desk that had listed Tara’s name in two separate reservations (though it was misspelled as “Cara” and “Stara”) and said they obviously had two fan rooms reserved. After some back and forth over whether they had any left (we found out later they did), we rolled our eyes and accepted the A/C upgrade. It was a tiny room, underneath the stairs to the third floor, but it had an attached sink and the air conditioning worked well. Be aware of this scam, as it happened to several other people while we were there. 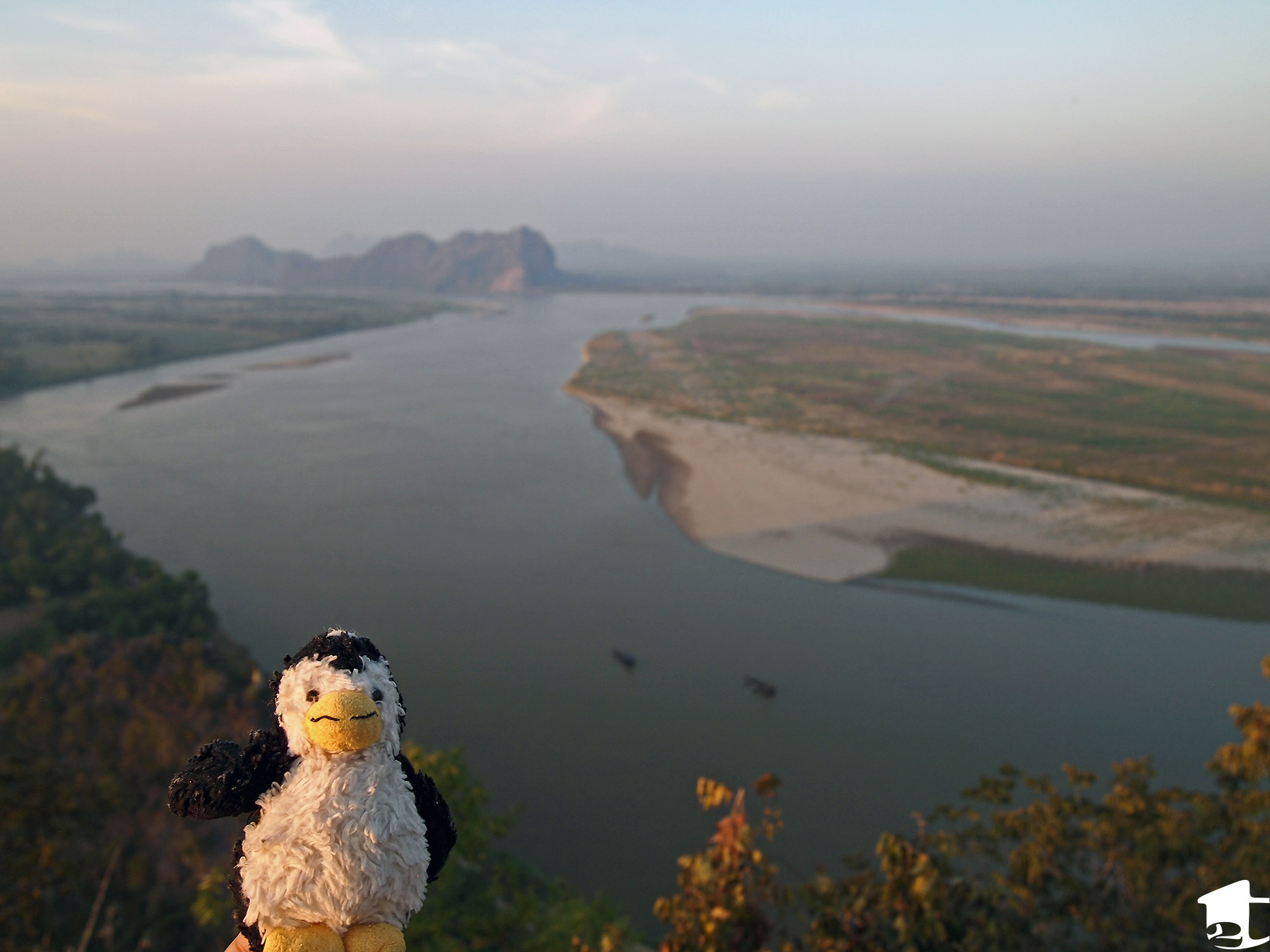 One of the Soe brothers is an elderly gentleman (we sadly never got his name) who proved to be extremely helpful, provided us with great tips on getting around and directed me to a place where I bought a paso (also known as a longyi), which I continue to wear. We used his tips to visit Hpan Pu Mountain for sunset the day we arrived. Sadly, since we arrived in the afternoon that was all we could squeeze in. The view is breathtaking, and so is the climb up the mountain. First, you need to grab a longtail boat to cross the Thanlwin River (500 kyats, or ≈ 56¢, per person for the 10-minute ride). Take a short walk to the mountain through a small village, skirt the bottom of the mountain until you see stairs and an archway, and begin your ascent. Mr. Soe quoted us 15 minutes to get to the top, but I would say it took us closer to 25 minutes. Getting down was not exactly faster, so make sure you budget enough time to get back for the last boat (between 6:30-7pm) or you may get stuck on the wrong side of the river for the night. The great thing about the mountain’s location is it is directly across from Hpa-an, so the view is that of the river and the town. Couple the view with sunset and it is worth the hike.

Upon returning to the guesthouse, we saw a sign for bike and motorcycle rentals, as well as one for guided tours to nearby caves and religious sites. Since I hate riding scooters, bicycles and basically anything with two wheels, we asked about the tour. The tour is essentially a tuk tuk rental for the day, but one that could fit 10 people in the back. The cost includes a driver but no guide (the driver spoke little English and certainly not enough to describe anything more than the locations’ names). The good news is the price was contingent on the number of people (the more people, the less per person everyone paid), so we went off in search of other interested parties. After some knocking on doors we found two French girls willing to join us the next day (Stay tuned for an in-depth description of where the tour went and what it included.). In retrospect, I cannot fathom trying to figure out how to get to the surrounding sights without hiring a local driver.

Besides climbing Hpan Pu Mountain and taking the daylong tour, we found several local restaurants in Hpa-an that served excellent Myanmar food (and draft beer) that really wowed us. In particular, San Ma Tau was the best value-for-your-money restaurant in perhaps all of Myanmar. We stuffed ourselves silly for a total of 2,000 kyats ($2.25USD), for both of us. The restaurant is a bit of a walk from the center of town, but well worth it. The clientele is both foreigners and locals, and upon choosing a “main” dish (curry, fried vegetable, etc.) for 500 kyats (≈56¢), for another 500 kyats you receive ten side dishes, rice, soup, tea, and three types of dessert sweets (all of which were practically “unlimited,” or at least, it could be said their portion size could be considered extremely generous.). San Ma Tau is a must if you visit Hpa-an. We went there twice and left happy both times. 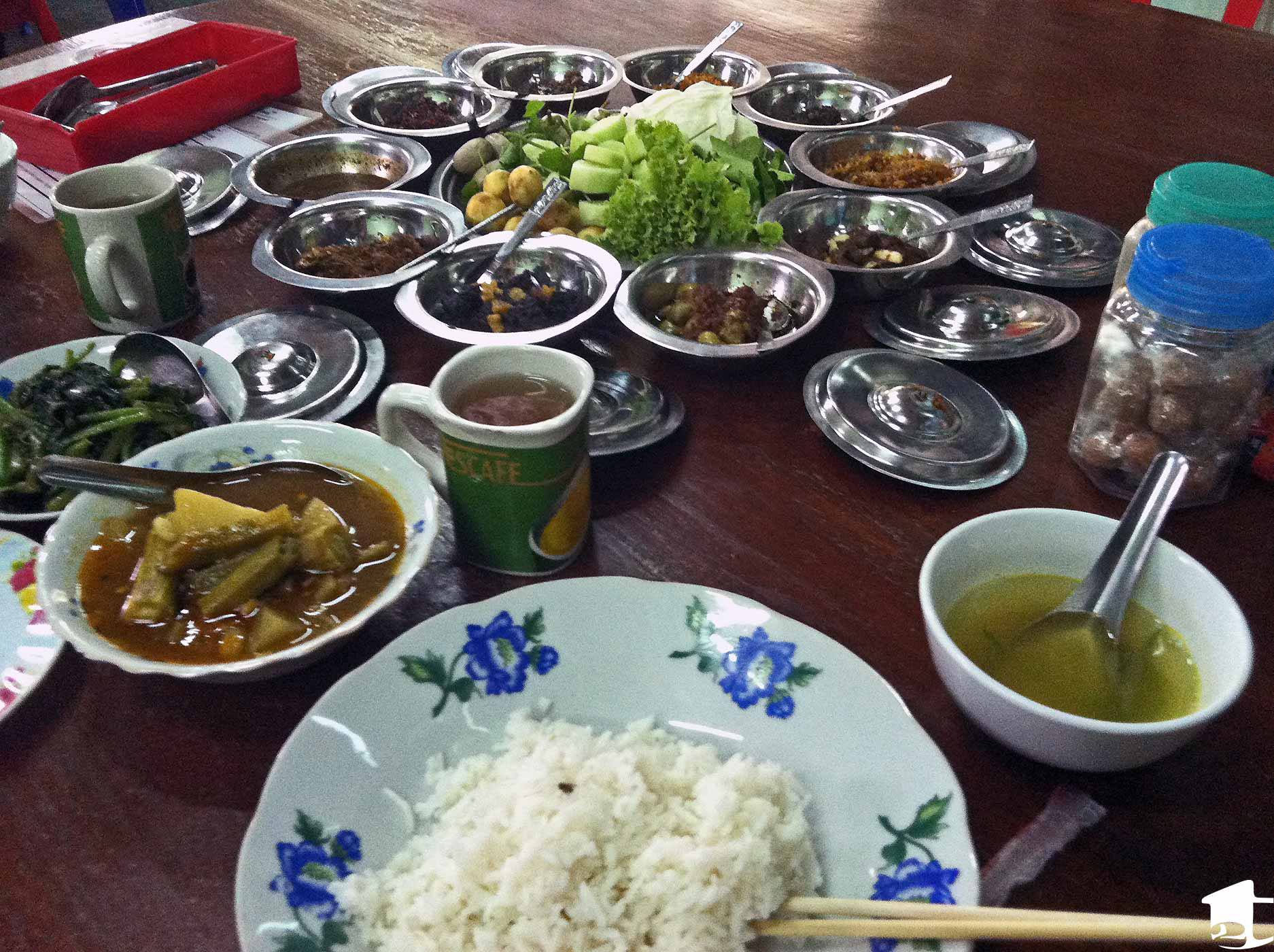 A smorgasbord of veggies, curry and side dishes at.

Another place we found ourselves frequenting in our short visit was Lucky #2, a restaurant that had the distinction of introducing us to ABC Extra Stout – the best stout we drank since Africa. They had good veggie food, but it was the cheap draft beer that kept us coming back (600 kyat, or ≈ 67¢, for Myanmar Beer and 750 kyat, or ≈ 85¢, for ABC Extra Stout).

In total, we spent three nights in Hpa-an and enjoyed every minute. It is easily accessible via bus from Yangon, or you could follow a similar route as us and break up the drive by stopping in smaller towns along the way. It simply depends on how much time you have to play with. We found three days to work well with our schedule and the things we wanted to see (We did skip Mount Zwegabin, which apparently has a monastery where monks feed monkeys. Very disappointed we missed that.). Since Myanmar can be a difficult place to plan ahead (some regions may become inaccessible to foreigners without warning), if you find yourself with some extra time, Hpa-an is definitely worth the trip. It seems to be far enough off the “normal” tourist loop (Mandalay, Inle Lake, Bagan, Yangon) that you will feel like you’ve been rewarded for coming here. We certainly felt like we were.