Our fourth stop in Myanmar was the town of Mawlamyine in Mon state. The main reason for visiting this city was to take a day trip to Win Sein Taw Ya, the largest reclining Buddha in the world at nearly 600 feet long. This more than 90-year-old unfinished monstrosity is tucked away at the foot of a mountain range, surrounded by a field of green. Larger-than-life statues of monks and pagodas of varying sizes dot the surrounding landscape. Unbeknownst to us before arriving, you can explore the inside of the Buddha. It contains scores of dioramas of the teachings of Buddha with captions in Burmese. If a Buddhist theme park existed, this would be it. 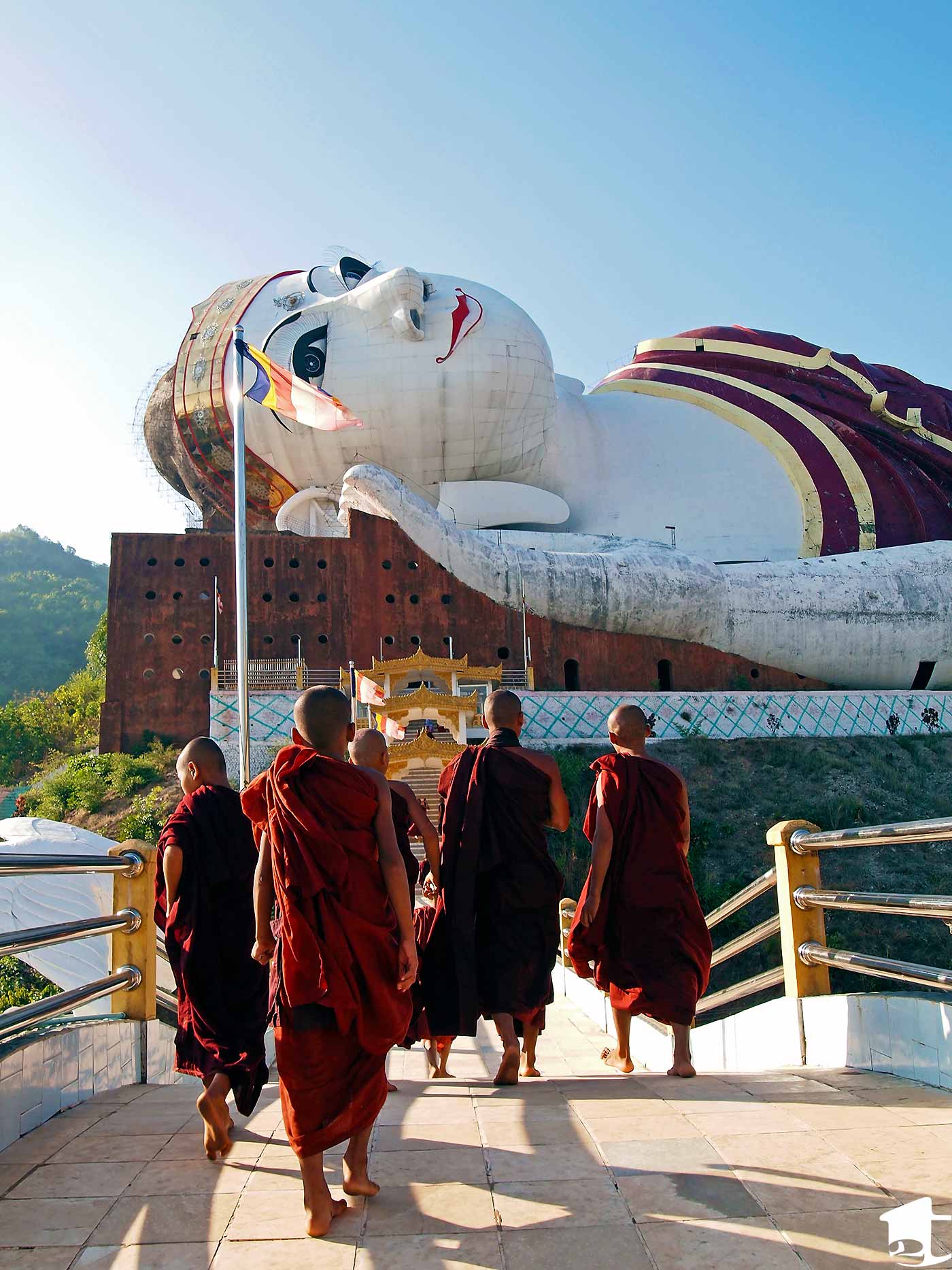 Monks walking to the Buddha’s entrance.

We departed Kinpun for Mawlamyine on another public bus, but the four-hour ride wasn’t too bad. After bargaining down motorbike taxi drivers, we went for our second motorbike ride with our large bags on our backs. It wasn’t as nerve-wracking as the first time around, but it was still by no means enjoyable. We were dropped at the Sandalwood Hotel, which ended up being another excellent hotel choice. The owner told us we had to leave as soon as possible or we wouldn’t be able to catch the last minibus back to town from Win Sein Taw Ya. Since we hadn’t eaten, the owner told us he could set up a driver to take us there and back when we were ready. Sold!

After more than 30 minutes of driving, we pulled off the main road and onto a long gravel entrance to Win Sein Taw Ya. On the left, a line of hundreds of large monk statues holding alms bowls guided us toward the entrance gate. As we drove past pagodas of varying sizes, Mike commented, “Here’s where they grow pagodas!” When we got out of the car, we were taken aback by the enormity of the Buddha. Then, from somewhere behind us, novice monks hurried past to climb the stairs to the entrance, their saffron robes billowing out behind them. I think little monks are adorable, so I tossed off my shoes and followed them. When I realized I left my husband behind, I waited so we could walk in together.

There are no signs inside and no security or anyone telling you that you can’t go a certain direction. With this freedom, we explored every nook we could fit into. We admired the skillfully made dioramas, both finished and unfinished, that show the teachings of Buddha; popped out of various exits for views from the Buddha’s ear, shoulder and arm; and came across boys that couldn’t have been older than 13 tiling the outside of the unfinished structure. When we felt there was no inch we left unexplored, we headed back to our driver.

On the way back to Mawlamyine, the driver offered to stop at Kyauktalon Taung, a stupa-topped limestone crag rising out of, well, the middle of nowhere. (A shorter crag with a Hindu temple appears on the opposite side of the road, but we didn’t have time before sunset to climb that one too.) The sun was starting to go down, and we could tell that the driver was getting anxious to return to town (to have dinner with his family, we thought), so we promised to be as quick as possible. We ascended the stairs as fast as we could, but it still took about 15 minutes to reach the top. At one point, the stairs split off into a men-only section and a both sexes area. We continued on to where we were both allowed, and the view was incredible! Agricultural land, palm trees and greenery surrounded us as far as the eye could see. Win Sein Taw Ya was sticking up in the distance, too. The breathtaking landscape was made even more beautiful by the colors bouncing through the sky around the setting sun. No one else was around, and it felt like our own little oasis.

With our driver in mind we drew in one last breath of fresh air and left. Mike took a detour to the men-only summit while I slowly made my way back down. After we pulled away from Kyauktalon Taung, the driver seemed really eager to return. “Man, he must really want to get home to dinner,” I thought. During the ride back, the driver sometimes slowed down and pulled to the side of the road. I couldn’t tell what was going on because Mike was in the passenger’s seat and I was in the back. What Mike soon realized was that the driver couldn’t see well in the dark and was a bit scared to drive us. Why didn’t he tell us that before we stopped for sunset?! Tipping isn’t customary in Myanmar, but after he dropped us safely at our hotel, we gave him a bit extra for his troubles anyway.

How to get there: Hire a driver at 15,000-20,000 kyats to take you roundtrip from Mawlamyine (14 miles and 30 minutes one way). Or pick up a minibus heading in the direction of Mudon and ask to be dropped at the junction for Win Sein Taw Ya (1,000 kyats one way), then walk up the road lined with hundreds of monk statues to the entrance. The last bus back to Mawlamyine is around 3pm, so plan accordingly.

Cost for Win Sein Taw Ya: Free, but a monk sits at the Buddha’s entrance collecting donations if you wish to give one.

Time: The Buddha is huge and you might want to give yourself an hour to explore it. Give two hours total if you want to leisurely walk around the pagodas and monk statues. For Kyauktalon Taung, give yourself about 20 minutes to walk up and the same time for the descent. Add in 30 or so minutes for taking in the view and snapping photos. Sunset at the top is highly recommended!

Need to know: Each attraction is a sacred place, so you must take your shoes off at the entrance. Be careful walking inside the Buddha as there are crumbled pieces of concrete and other materials on the ground as a result of ongoing construction. The stairs leading up Kyauktalon Taung are also litter with rocks and pebbles. Just watch your step.