After traveling for nearly a year, Tara and I seem to have found a perfect balance between going on our own and hiring a guide/tour to take us around. The benefits of both (you pay a premium for knowledge and access with a tour, but it also means giving up freedom and flexibility) keep us from completely committing to one or the other. While visiting Hpa-an, Myanmar, we opted for a tour versus renting our own motorcycle and are glad we did. 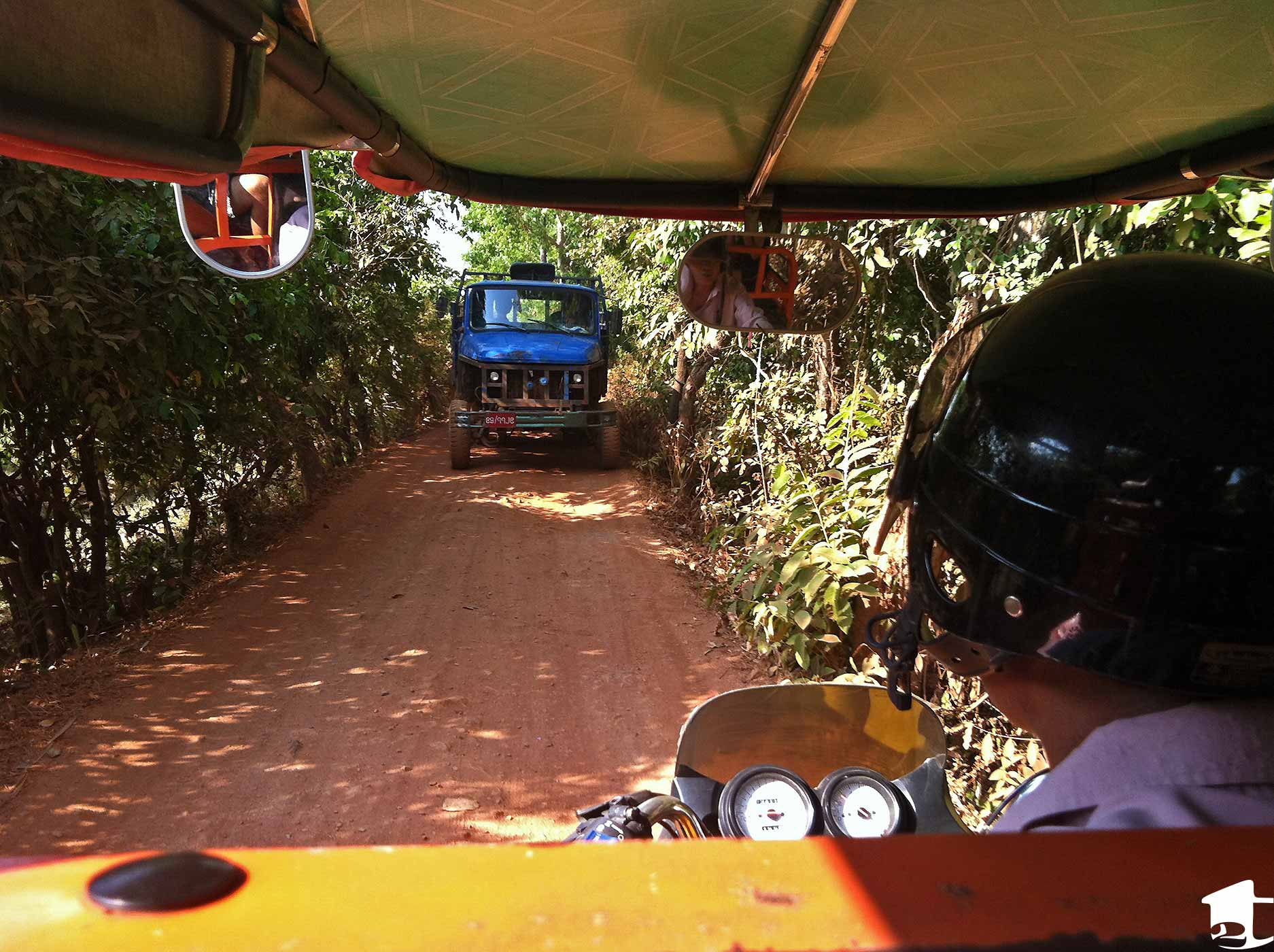 View from behind our tuk tuk driver.

The Lonely Planet guidebook seems to encourage readers to either rent their own transportation or take a tour, but I will do one better: I will not give you an option. Do not rent a vehicle and try to go to sights around Hpa-an unless you have a detailed map and a proficiency in speaking/writing Burmese. Over the course of more than eight hours (8am-4:30pm) we paid random tolls and traveled down too many dirt roads and unmarked lanes to adequately provide directions to anyone trying to go at it alone. Our driver was flying between locations and, even then, we only covered seven sights.

Although the drive unraveled over a full day, it never felt rushed, and we always thought we had enough time to take the videos or pictures we wanted at each location. The tuk tuk/songthaew rental, sans guide, clocked in at 30,000 kyats (around $34USD). We set it up through Soe Brothers Guesthouse, which seemed to be one of the only places in town offering this type of tour. We were able to split the cost with two other long-term travelers, making it an affordable 7,500 kyats ($8.47USD) per person.

We came into the company of Lucie and Isabelle (the French girls we took the tour with) by knocking on a couple doors in the hostel. It turned out that they were also looking for people to split the cost with and were game to go early the next morning. We got up a little early to grab some rolls and energy drinks for the ride since our guesthouse didn’t offer breakfast (a wise choice since lunch did not come until the afternoon). It was late April and extremely hot, so we wore light, airy clothes, but you will need to cover your legs and shoulders in order to enter some of the temples (for example, Tara wore shorts but brought her htamein, a female longyi, to tie on when necessary).

Here is the list of sights we saw: Yathei Pyan (aka Yathebyan) cave, Kawgoon cave, Kyaukka Latt Paya, Lumbini garden, Ye Dagon Paya, Saddan cave and Kawkataung (aka Kawka Taung) cave. If you have been “templed-out” coming from Bagan or if temples do not interest you, you may be disappointed with the tour since the caves have Buddhist sculptures and carvings in them. We, however, found everything pretty fascinating. 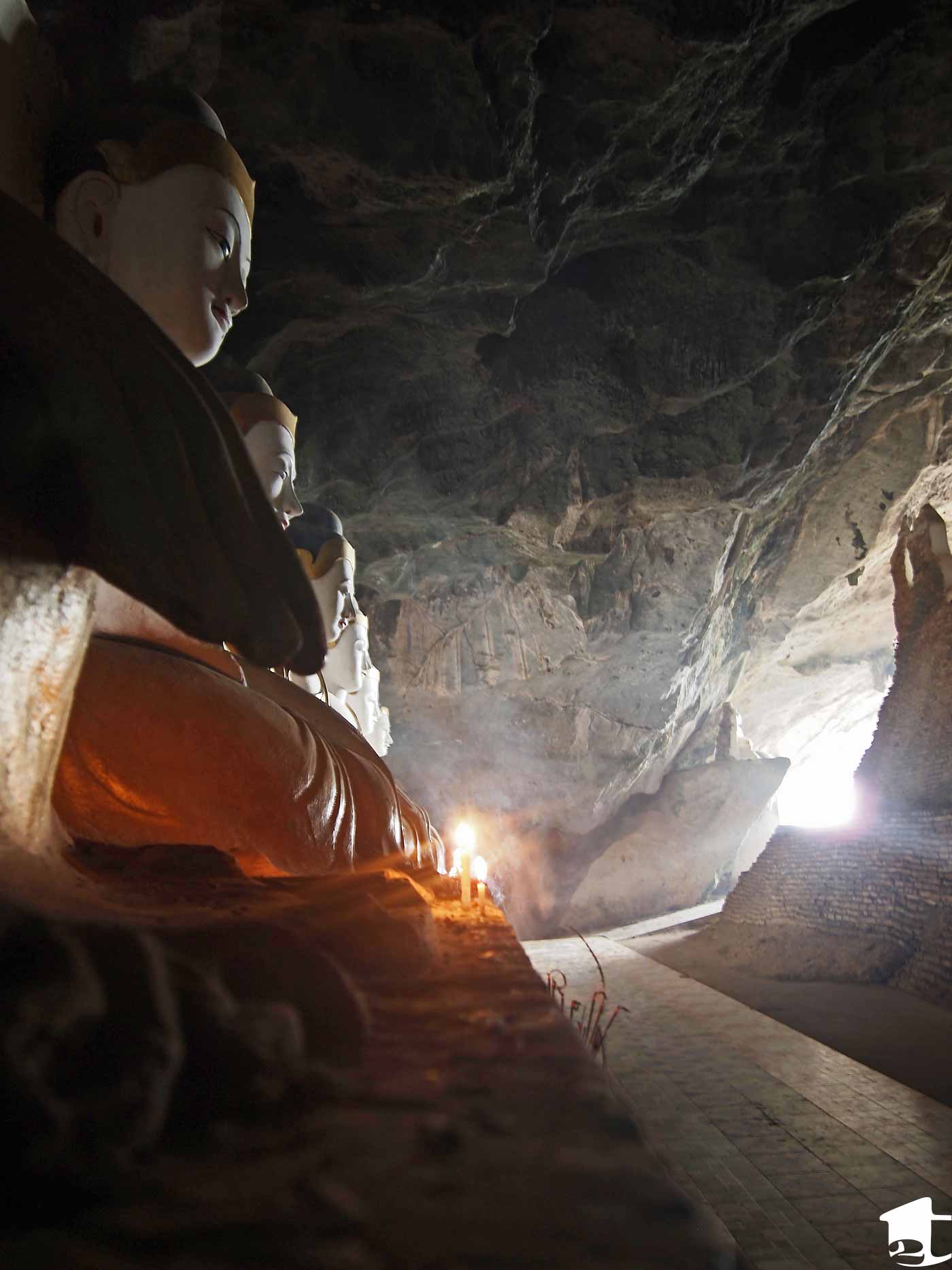 Beginning with Yathei Pyan Cave, we soon realized we had lucked out with the timing of our visit (despite it being incredibly hot). With the rainy season about to start in a few weeks, the region floods and most caves are shut down out of safety for visitors. In the case of Yathei Pyan, the cave is slightly elevated so it does not fill with water, but the surrounding area makes it impossible to approach in anything but a boat. After walking up a set of stairs lined by golden robed monks, we entered the mouth of the cave to find a large stupa (which was an anomaly compared to other caves, most of which featured a large Buddha or a few large Buddhas front and center). The walls were flanked with Buddha sculptures and partially covered in tile. You would think the air would be much cooler than in the sun but the humidity kept us sweating. After passing the Buddhas, there is a passageway that leads to another entrance, but the view offered little excitement so we returned to the vehicle.

Next up was Kawgoon Cave. If there was a disappointment on the tour, this was it. This is not to say it was not worth visiting, but we ended up paying an admission fee of 3,000 kyats ($3.38USD) each to visit a small cave, the majority of which was covered by scaffolding as it was undergoing repairs. Since this was the only location we visited that required an entrance fee, you can imagine all of our surprise when we realized how underwhelming it was. It was unclear if the admission fee was going to the government or to the repairs. Had they been upfront about the limited view, we probably would have been fine with the situation. Until the repairs are completed, this is one cave worth skipping. If there was redemption to be had, the road we took to get to this cave required us to pass by monks repairing the road. While monks hard at work stripped to their skivvies did nothing for me, at least the other passengers seemed pleased with scenery.

If we were disappointed with Kawgoon Cave, then Kyaukka Latt Paya left our jaws slack and our memory cards full of pictures of a magical temple on the top of a limestone column. As we had discovered in Mawlamyine, there is no rhyme or reason to where these columns appear, but we came to discover that if there is a towering peak, you can rest assured there will be a temple on the top of it. This particular paya not only sits on the top of a limestone throne, but is surrounded by a circular lake. You must cross a long wooden bridge to get to the island (Lucie and Isabelle were turned away at the bridge for showing too much skin so Tara loaned Lucie her longyi and Isabelle was lucky to have a local provide her with one), and the whole location can only be described as otherworldly.

Before crossing the bridge, vendors sell popcorn in halved water bottles. At first, we thought it was just for tourists to snack on, but as we began to cross the bridge, we noticed people flinging the popcorn outwards over the bridge. As the popcorn hit the water, giant catfish jumped into the air to grab as many kernels as possible. There were a fair amount of Myanmar tourists at this temple, mainly praying. Tara and I were excited to summit to the top, but unfortunately we were stopped about halfway up. There are ladders and a means of getting to the top, but there was a locked gate preventing us from getting to said ladders. Even so, the panoramic view of the lake, land and mountains in the distance made this one of the cooler places we visited. 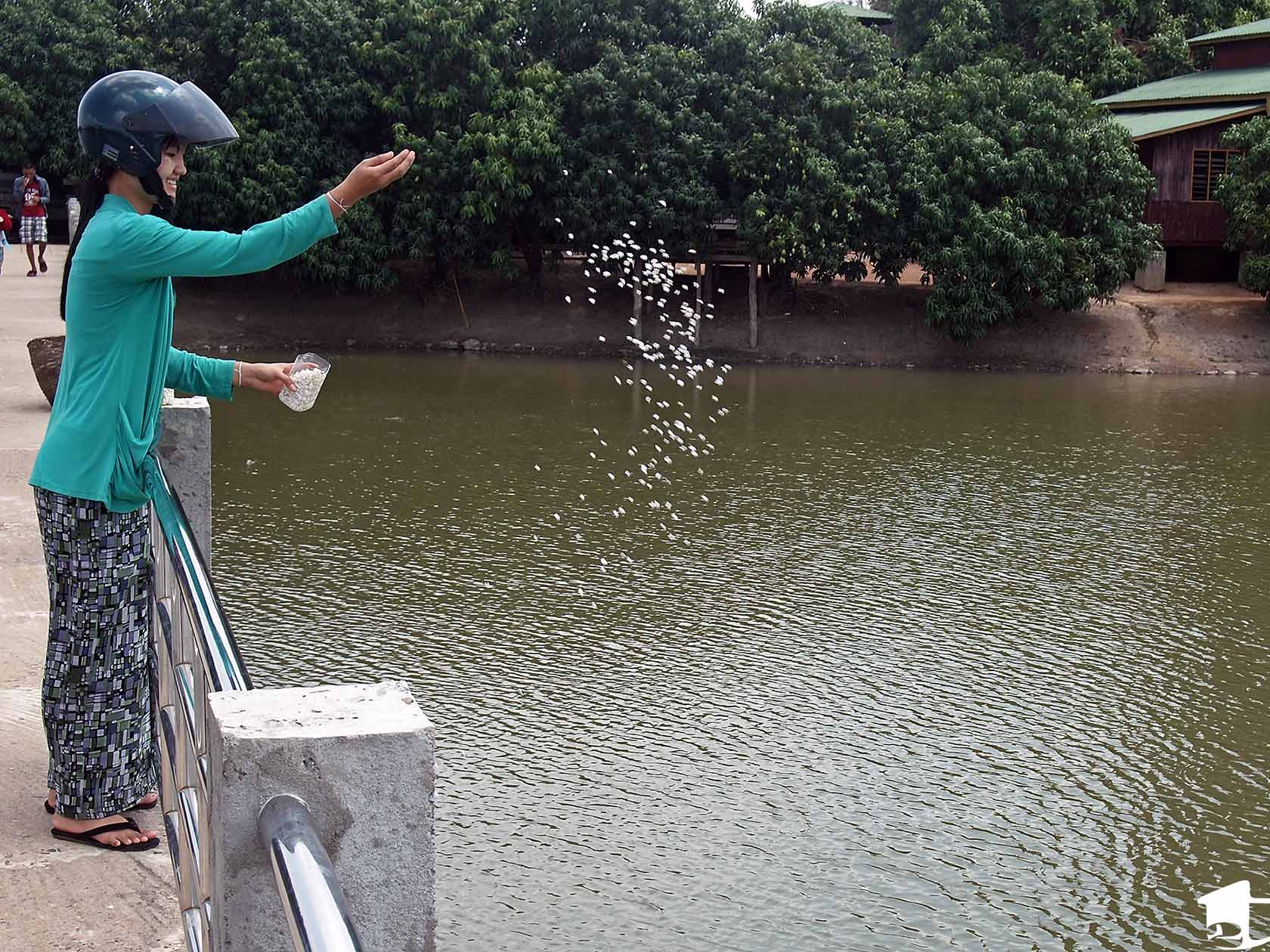 The temperature was starting to rise to a boil, but before we stopped for lunch, we visited Lumbini Garden. They grow Buddha statues here for export. At least, that is what I thought when we got there. There are fields and fields of hundreds of carefully arranged, identical Buddha statues, each with a number on the back (in Burmese numerals). It is a surreal place to wander in. After walking around for a bit, we were ready to get something to eat and find some shade.

Lunch was had after a short drive to Ye Dagon Paya. This temple/cave has the distinction of having a pool you can swim in. We opted not to join scores of local kids in the pool. Apparently, the water is pumped in fresh and even though Tara and I wore our bathing suits, it looked a little too green for our liking. Rather than tempt fate and a bacterial infection, we chatted with Lucie and Isabelle and had a delicious meal.

After more than an hour to eat and let the food settle, we made our way to Saddan Cave. This was a bona fide cave, one that required headlamps and torches to walk in. Whereas the previous caves you might be able to walk in a little ways before running into a dead end, this cave opened up quickly and became pitch black twice as fast. If you are scared of bats, this is not the place to visit. In parts, their screeching is nearly deafening. It took about 20 minutes to walk through, and once we came out the other side, we were greeted by several friendly fishermen and women in front of a small lake. 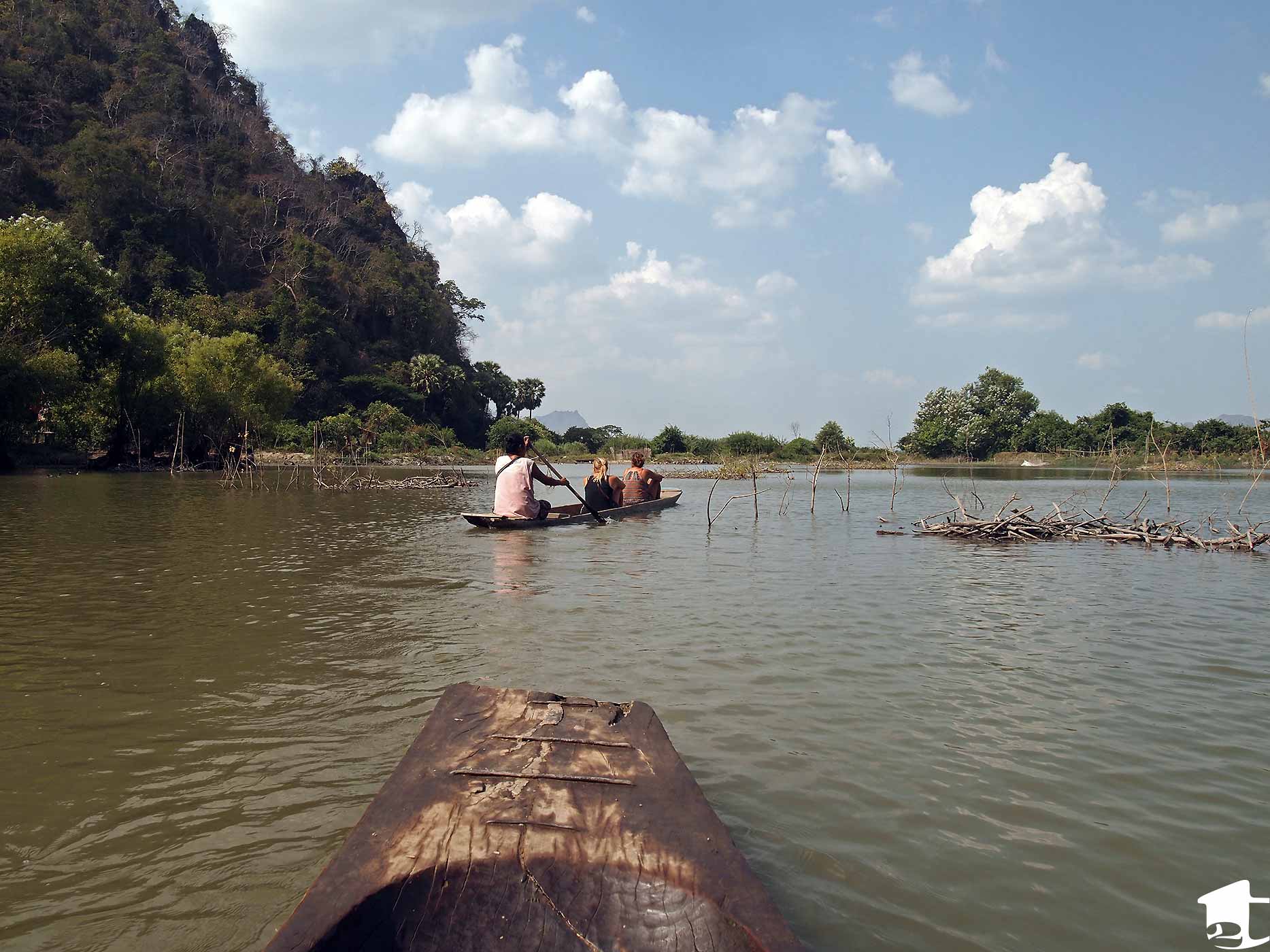 Canoeing on the lake outside Saddan Cave.

Initially, we were going to turn back and return through the cave, but we found the locals take visitors by canoe through a secret cave to an alternate way back. Intrigued, we found the cost was only 1,500 kyats ($1.69USD) per boat, so we agreed. The ride itself was probably only 10 minutes, but it had us passing by fish farms, locals swimming, under a secret cave passageway and popping out to a new and breathtaking view. From there we walked back to our vehicle on hot, rocky and spikey terrain (we had taken off our shoes at the mouth of the cave, as it is a temple, and foolishly not taken them with us). With our driver waiting for us, we piled back in, ready to go to our last sight.

The Kawkataung (aka Kawka Taung) Cave has little to offer in terms of sights within the cave. Outside there are several oversized cement sculptures of religious and non-religious (giant goldfish?) origin. However, we found a stairway nearby that brought us to the top of a nearby hill and, of course, a paya that offered a mesmerizing view that allows you to see for miles and miles. For the most part, the land is flat, but a few other mountain ranges can be seen. While we were at the top, a few Myanmar visitors were up there too. They were calling out into the wind, some of the shouts echoing. Tara and I even screamed out a couple times, too, much to the amusement and delight of the others.

As our tour wound down and we headed back to Hpa-an, Tara and I looked at each other with that silent but knowing look. We were happy we did the tour. And if you want to maximize your time and the sights you can see in the area surrounding Hpa-an, you should consider taking a tour as well. We opted to go through Soe Brothers Guesthouse, mainly because were stayed there, but if you can find someone else to take you to the same sights, I could not recommend it more highly.