Malaysia was never really on our itinerary. For that matter, Singapore wasn’t either. But before we were able to apply for our Indian visas, we had to purchase an onward flight out of India. We bought the cheapest one-way ticket we could find, which was to Singapore on Air Asia. The way we would continue our journey, we decided, was to travel overland through Malaysia into Thailand.

After exploring Singapore, we headed a few hours north to Melaka, Malaysia. Something didn’t seem right about the city. The heart of Melaka felt as fake as Venice has become. It was once a lively trading port and colonial town, and it probably lost its luster after being named a UNESCO World Heritage site and selling its soul to tourism. The Hard Rock Cafe sandwiched between the snaking river and famous antique road Jonker’s Walk probably has something to do with it. But thanks to its early years as a rich trading port, Melaka has played host to many cultures that filled its culinary history with Malay, Chinese, Indian, Portuguese and other influences. It was our first introduction to the Malaysian culinary adventure that awaited us. 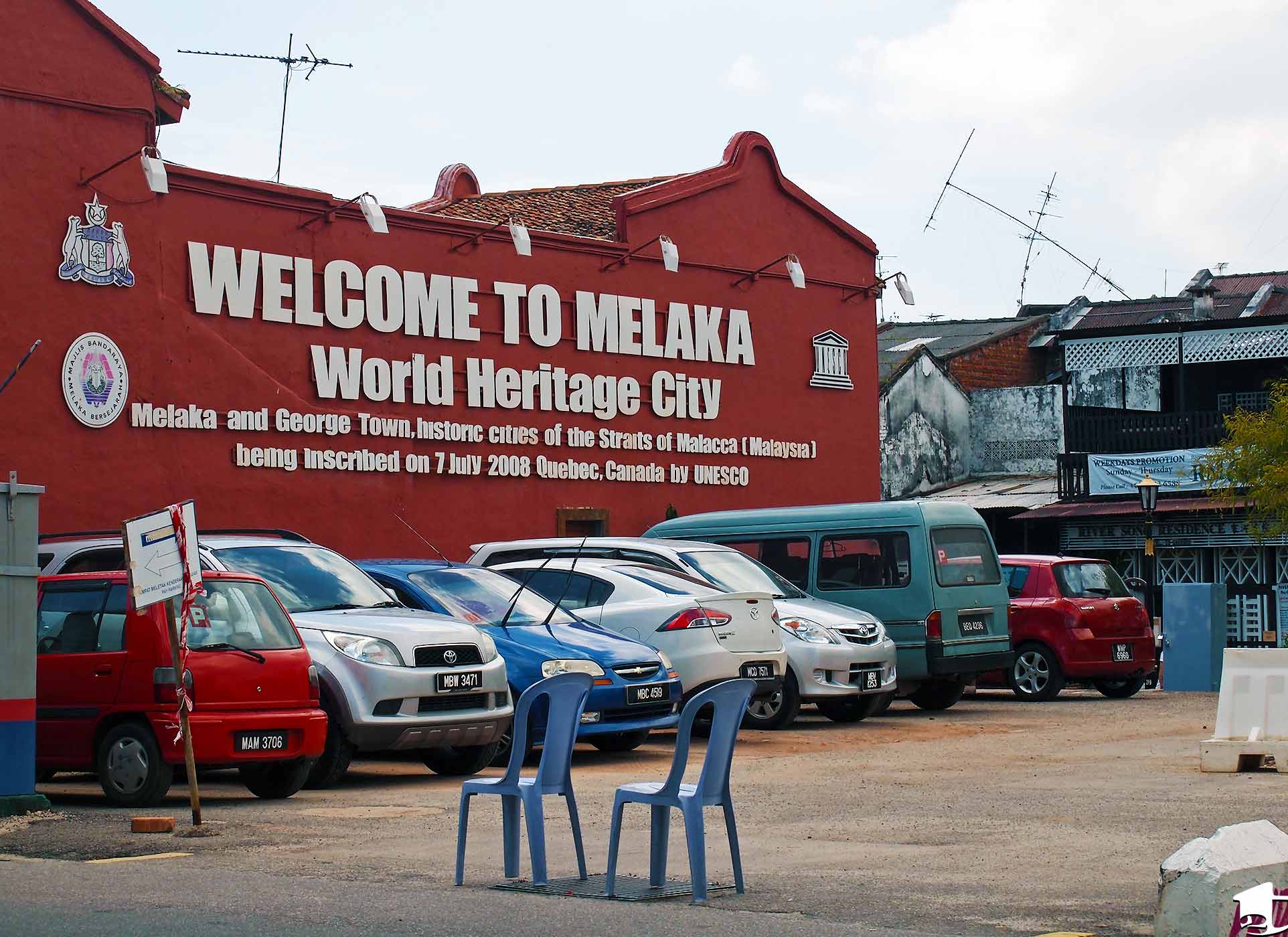 On our first full day in Malaysia, Mike and I were in search of a traditional meal. We skipped Melaka’s Little India after putzing around the real thing for the last 72 days. We wanted something new and different. The owner of our guesthouse recommended a stall called Jonker 88, where we could get a taste of local Nyonya food. We ordered baba laksa, a spicy and aromatic coconut milk-based noodle soup, and cendol, a dessert of shaved ice topped with coconut milk, palm sugar, bits of pandan jelly worms and a durian topping. That lunch is still one of our favorite meals in Malaysia.

After trying durian on cendol, we were also eager to try other forms of the infamous “king of fruit.” Durian is the only fruit in the world that we’ve seen banned from hotels, public transportation and, well, public places in general. The reason is because of the odor it gives off once you open the shell. Some liken it to sweaty socks, others to rotten onions or overripe bananas. It’s wildly popular in Southeast Asia, and Malaysia in particular. In honesty, while we’ve tried every other exotic Southeast Asian fruit we could get our hands on, we still haven’t eaten the actual durian meat. But we’ve had our fill of the flavor and smell through candy, coffee, cream puffs and pastries. 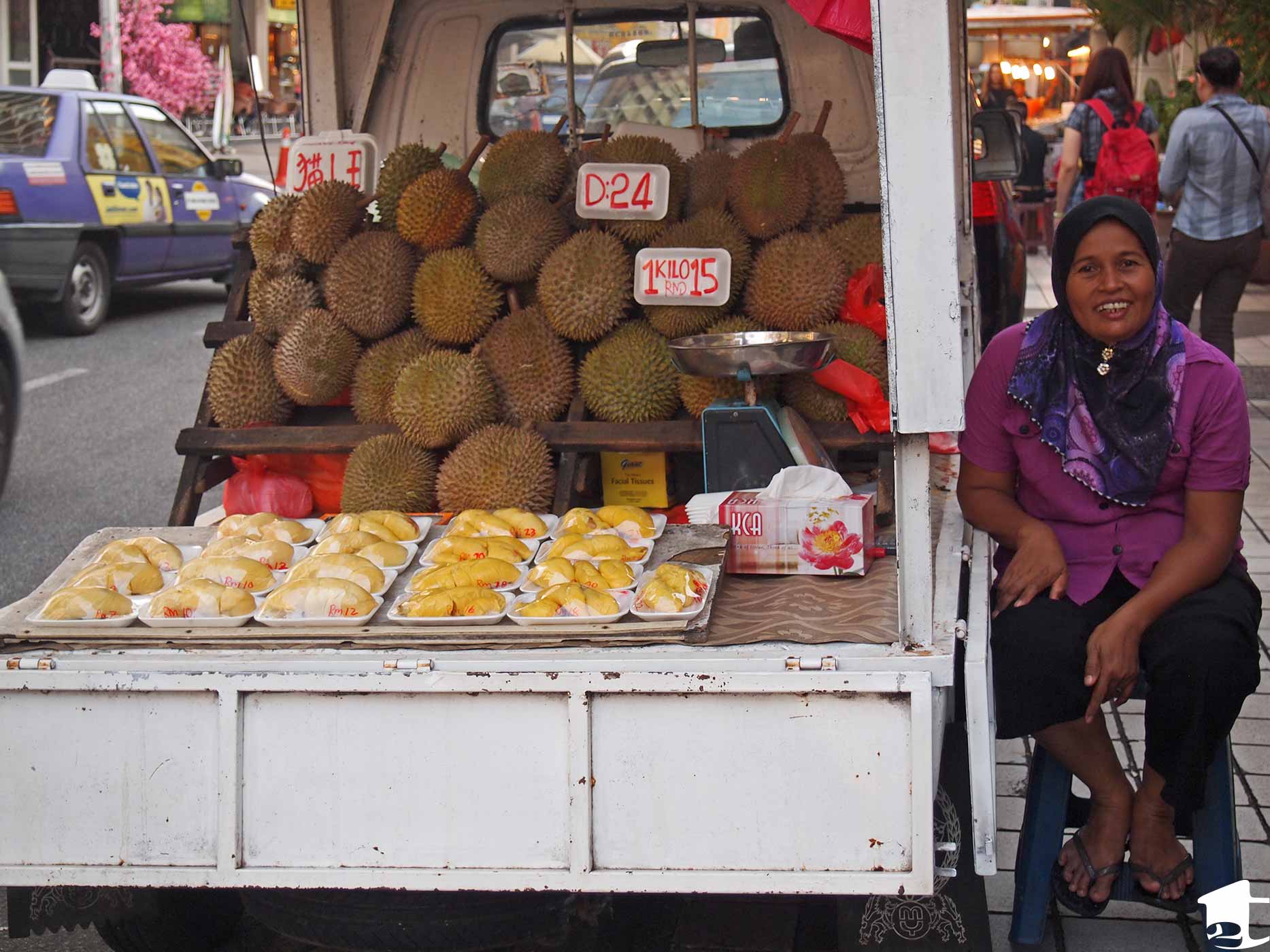 On weekend nights, Jonker’s Walk lights up and all the food and knickknack vendors bring their stalls onto the pavement. The area shuts down to motorized traffic and becomes a tourist-centric version of a locals’ night market. (In the comments here others have said there’s a better night market a 30-minute walk from the center.) At one end of the street, Kung Fu Master Ho Eng Hui puts on a two-hour show, but around 8:30pm the climax occurs. He is a Guinness Record holder for puncturing a coconut shell with his bare index finger, and we got to see him in action. It was definitely worth watching! Afterward, we set out in search of food. Even though the market caters to tourists, the food is still outstanding. We stuffed ourselves silly with popiah, “carrot” cake, oyster omelet, marinated octopus, fried radish cake, fish balls in curry sauce and exotic jelly drinks.

After a couple days in Melaka, we took another day bus to Kuala Lumpur, referred to by everyone as KL. (So many Asian cities are referred to by their initials. Reminds me of DC.) Interestingly, it is a city that was built within a jungle, which is evident not only when you head toward the suburbs but also around the KL Tower in the CBD (This is the central business district, AKA downtown). KL is home to the monstrous Petronas Towers, once the tallest buildings in the world. Their architecture incorporates the Islamic eight-pointed star design, which represents the religious majority and local culture. About 60 percent of the population is Muslim, which largely influences the already multi-racial food, architecture and culture. The three largest ethnic groups in Malaysia are Malay, Indians and Chinese. In an effort to show unity among diversity, there’s a “one Malaysia” campaign we’ve seen around. Ads show a representative from each of those three ethnicities and a big 1 with the Malaysian flag inside. 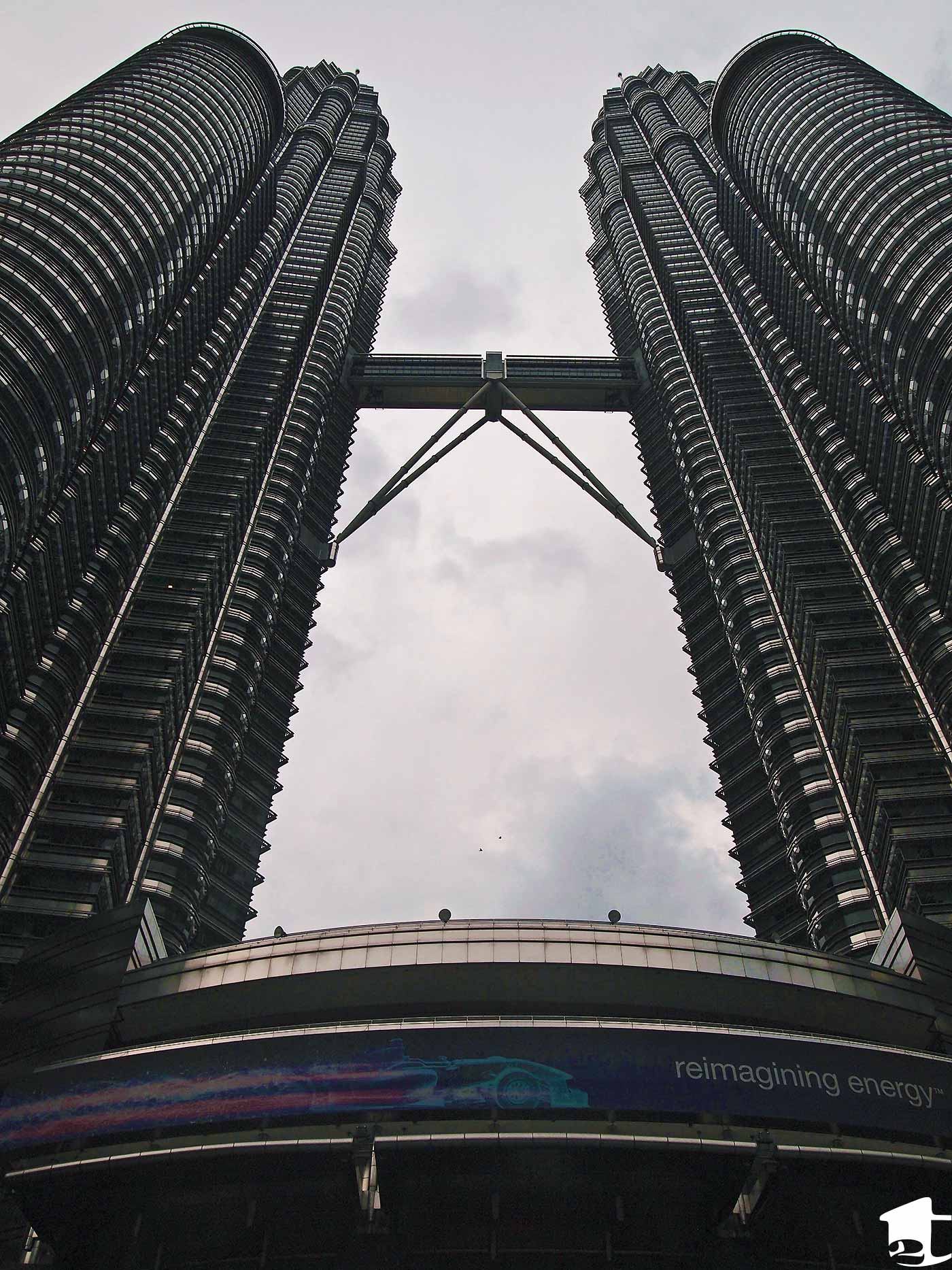 We Couchsurfed in KL for five days and took it slow. There’s something about staying in someone’s home that always slows us down, but in a good way. It’s probably because we end up talking to our host(s) for hours on end, and they make us feel at home. When we stay in hostels, we prefer to minimize our time inside and are therefore more productive in the city.

Anyway, we visited all the sights of KL that we wanted, but it took five days instead of three. While the city has some cool attractions like the Batu Caves, a bird park and ethnic neighborhood markets, it’s not a super exciting city. (There are a lot of malls. If we could stereotype Malaysians, we’d say they like malls.) And can I just say that the metro/light rail public transportation is so confusing because many of the lines are owned by different groups, so you can’t always transfer to a different line (without exiting and purchasing a new ticket) even if the rail map shows that you may be able to. Ugh! 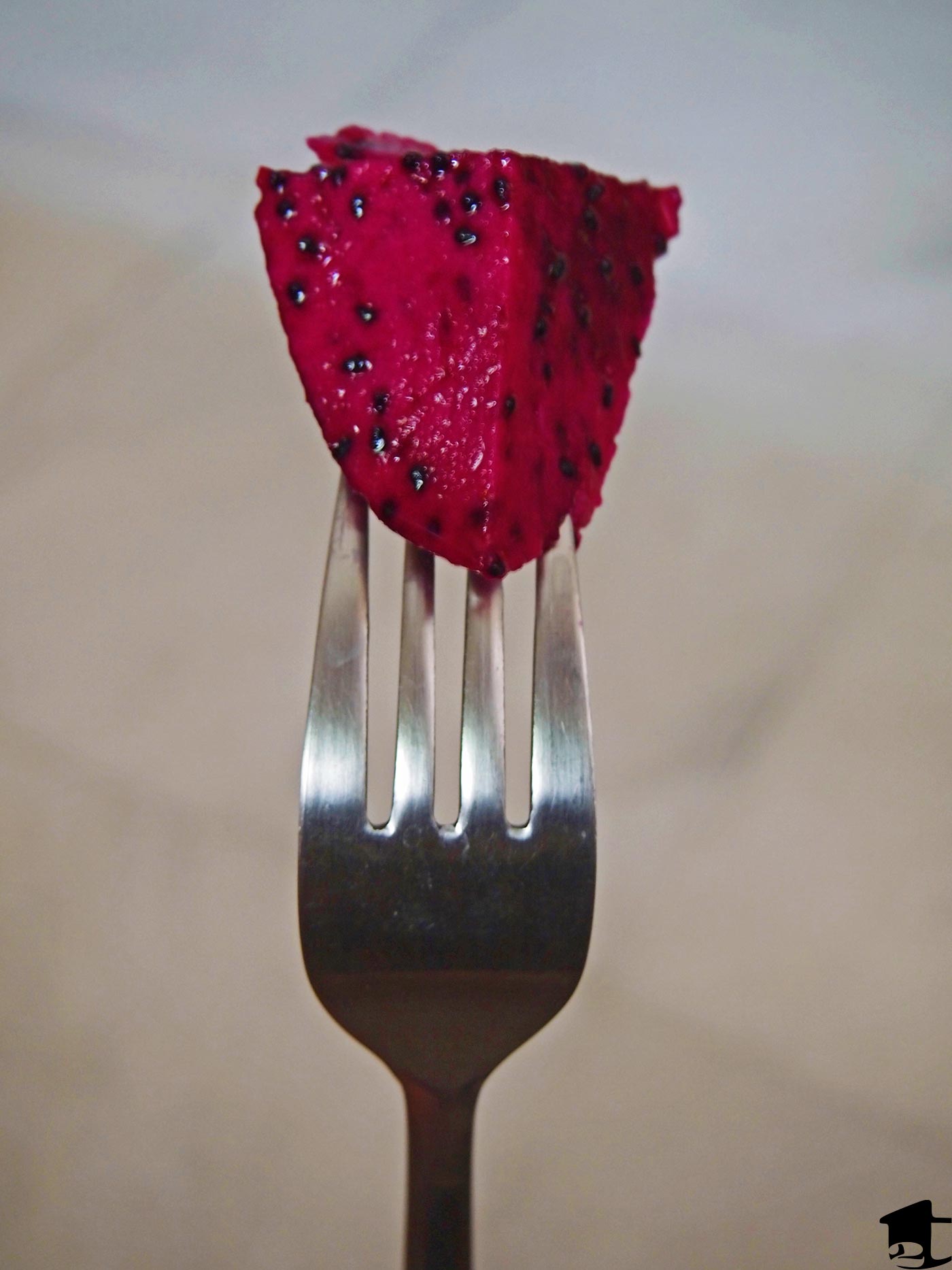 A piece of red dragon fruit.

Rant over. In-between late mornings spent swimming and bouts of sightseeing, we worked on our food vocabulary in local eateries and ate new [to us] fruit. Here’s a short list of the fruit you can find in Malaysia that we devoured (which have you tried?):
•hog plum
•dragon fruit
•passion fruit
•starfruit
•mangosteen
•water apples
•jackfruit
•and the pear that’s called “Asian pear” in the States

Side note: Mike’s such a doll — he has yet to eat mango here. I once had a really bad experience with mango and can’t eat or smell it now without getting queasy. I gave him my blessing to have mango sticky rice in Thailand.

READ ABOUT OUR TIME ON PENANG AND PERHENTIAN KECIL.