Our next stop was Penang, or Pulau Pinang in Bahasa Malaysia, the country’s official language (pulau means island). Before arriving, I read in Lonely Planet something along the lines of: People go to Penang to eat. They think they go for another reason, but they’ll soon realize they’ve gone to Penang for the food. Naturally, I was really eager to get to the island, though thus far this was how I felt about Malaysia as a whole.

In Penang, we Couchsurfed for the 12th time on our trip with a Vietnamese girl named Trang. She had been in Penang only four months longer than us, but already knew it very well. Nevertheless, she was still just as eager to explore it. Unfortunately, she has a job that required her to, well, work. So while Trang was pushing papers, punching the clock, making dough, Mike and I wandered around. Our first stop was George Town, a UNESCO World Heritage site founded by the British East India Company centuries ago. The Asian and colonial architecture make it a really interesting town to get lost in, not to mention the much-newer street art. You get the feeling that you’re in a misplaced European city surrounded by Asian hawker stalls. Smoke rising from firing a wok filled with oil. The smell of char kuey teow in the air… Uh, heaven! George Town was really enjoyable to explore, but it is so small that one day of sightseeing was plenty. 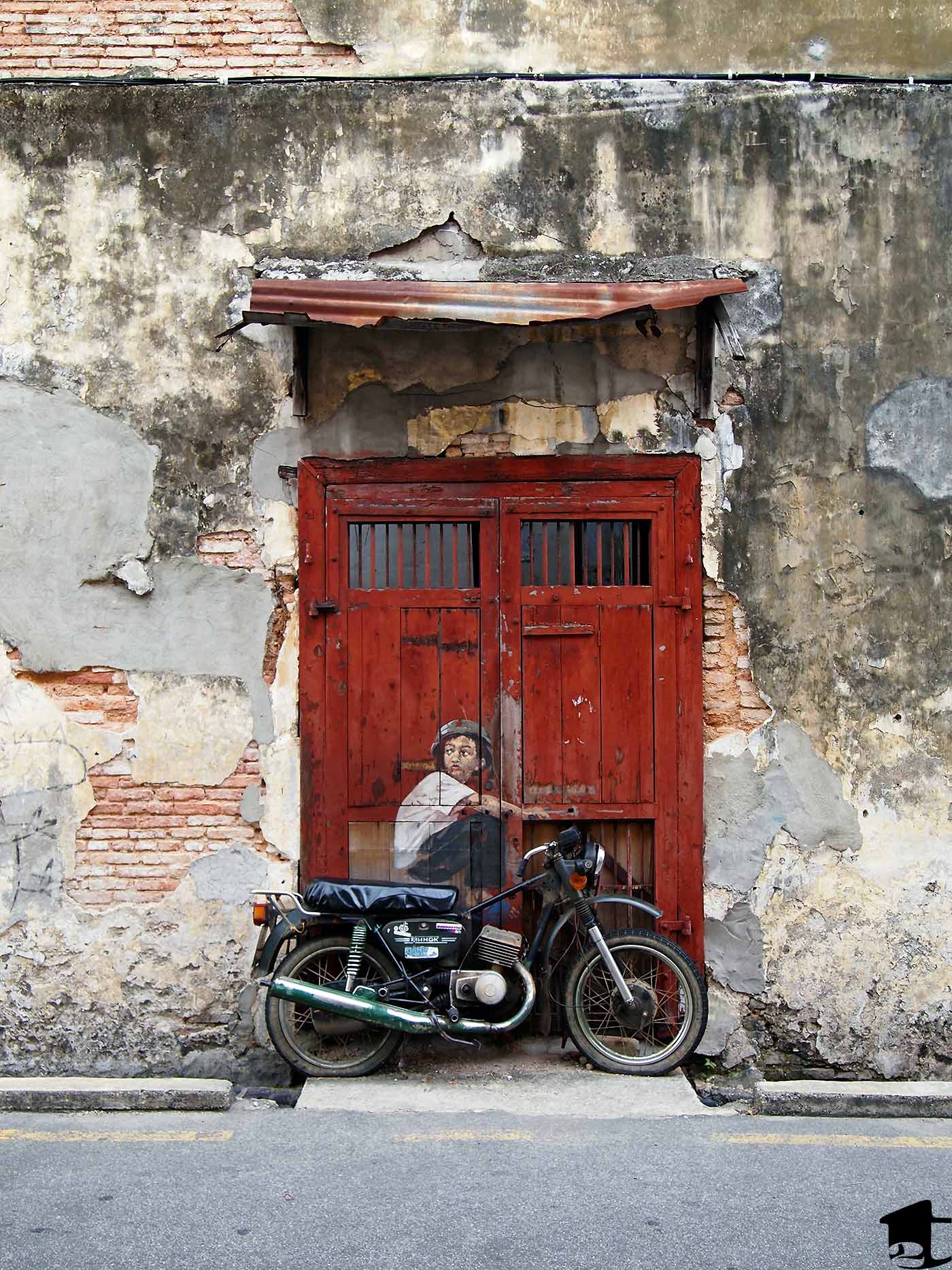 Another day we took a short bus ride to Kek Lok Si, a 122-year-old Buddhist temple. The complex was the largest we’ve visited, and it was actually the type of temple we expected to see more of in Asia. Most of the temples we’ve seen thus far have been smaller community temples. They have charm and much history, and we love walking around them because up until now we’ve only seen mosques, cathedrals and Hindu temples. (Another interesting sight is how similar and different each place of worship is depending on the country and continent. But that’s another article.)

In Trang’s time off, she joined us for a hike through Penang National Park. We wound up on turtle beach expecting to see some turtles, but that was a silly expectation. Instead, we saw golden sand sprinkled with cracked shells. Guess we just missed them. To return to the bus stop, we could either hike back another hour through the jungle or hop on a speed boat. The last speed boats of the day were waiting around to take their passengers back, and no matter how much we batted our eyelashes at them, none of them would let us jump on board. Trang ended up working her Vietnamese magic and got a family to let us join them — for free. 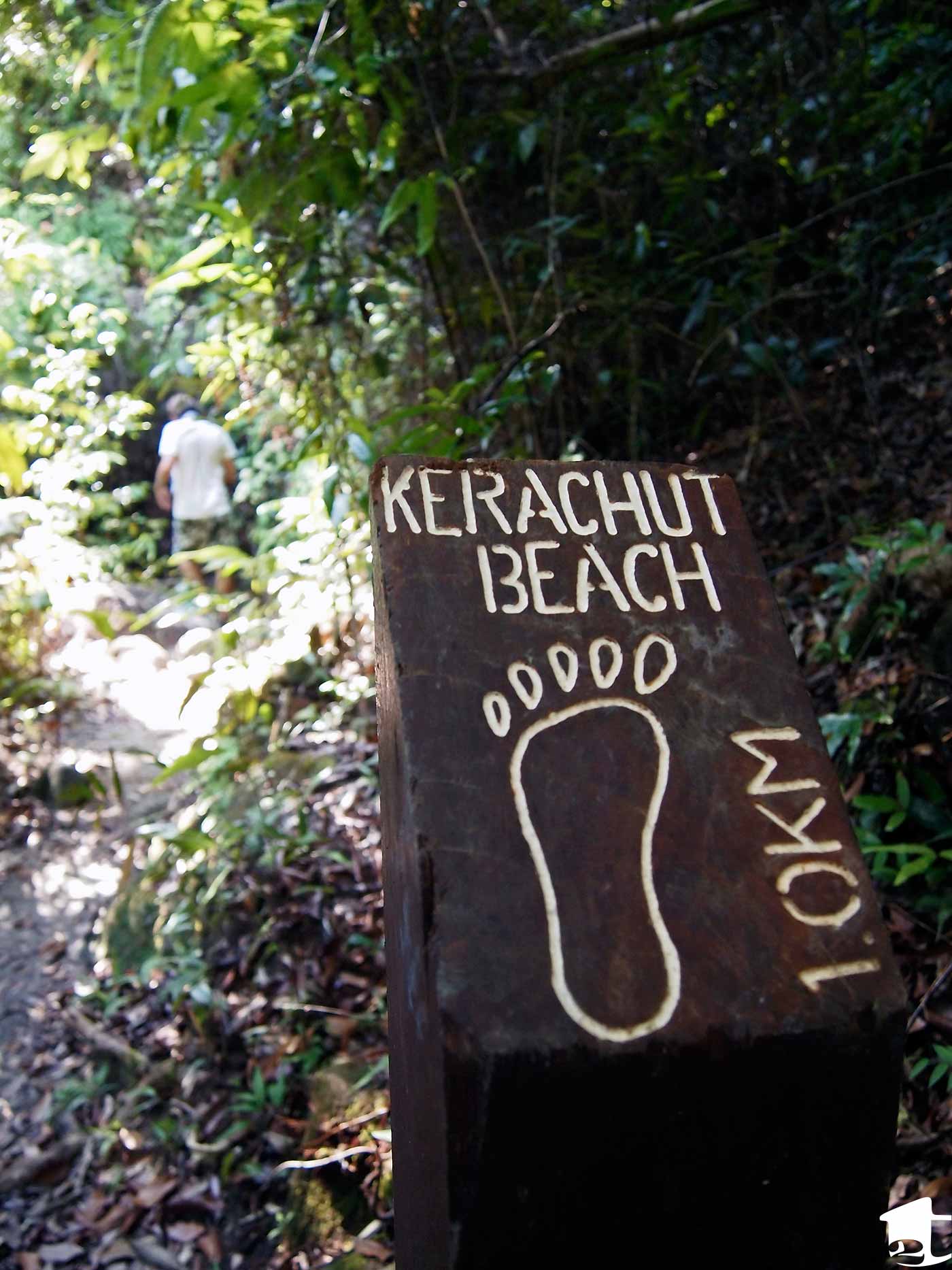 We spent a lot of time talking with Trang after work, probably keeping her up way too late. She cooked Vietnamese dishes for us, and I squeezed out every last drop of recipe knowledge from her. Mike and I cooked up a south Indian dinner that we learned, and another night made ceviche. We all got along so well that it felt like we were visiting an old friend. And that’s how most of our Couchsurfing experiences have been.

Trang was so awesome that we made her an honorary third travelaholic. Here’s how it happened:

One night, Trang told us about the Perhentian Islands. They aren’t too built up, she said, and have beautiful beaches with clear water and many opportunities for diving, snorkeling and being lazy. We aren’t SCUBA certified, but we love snorkeling and being lazy. Sold! Mike and I had nothing else booked and only a vague idea of where we were headed next. The beauty of not having concrete travel plans is that you can say “let’s go” without having to cancel something else. Trang had a four-day weekend coming up, so we decided to take a trip together.

We traveled on a sleepless eight-hour overnight bus to Kuala Besut, where we took a speedboat to the smaller island called Perhentian Kecil, which is known as the budget and backpacker-friendly island. We spent three relaxing days in the water, on the sand, under the sun and enjoying the island’s “night life.” 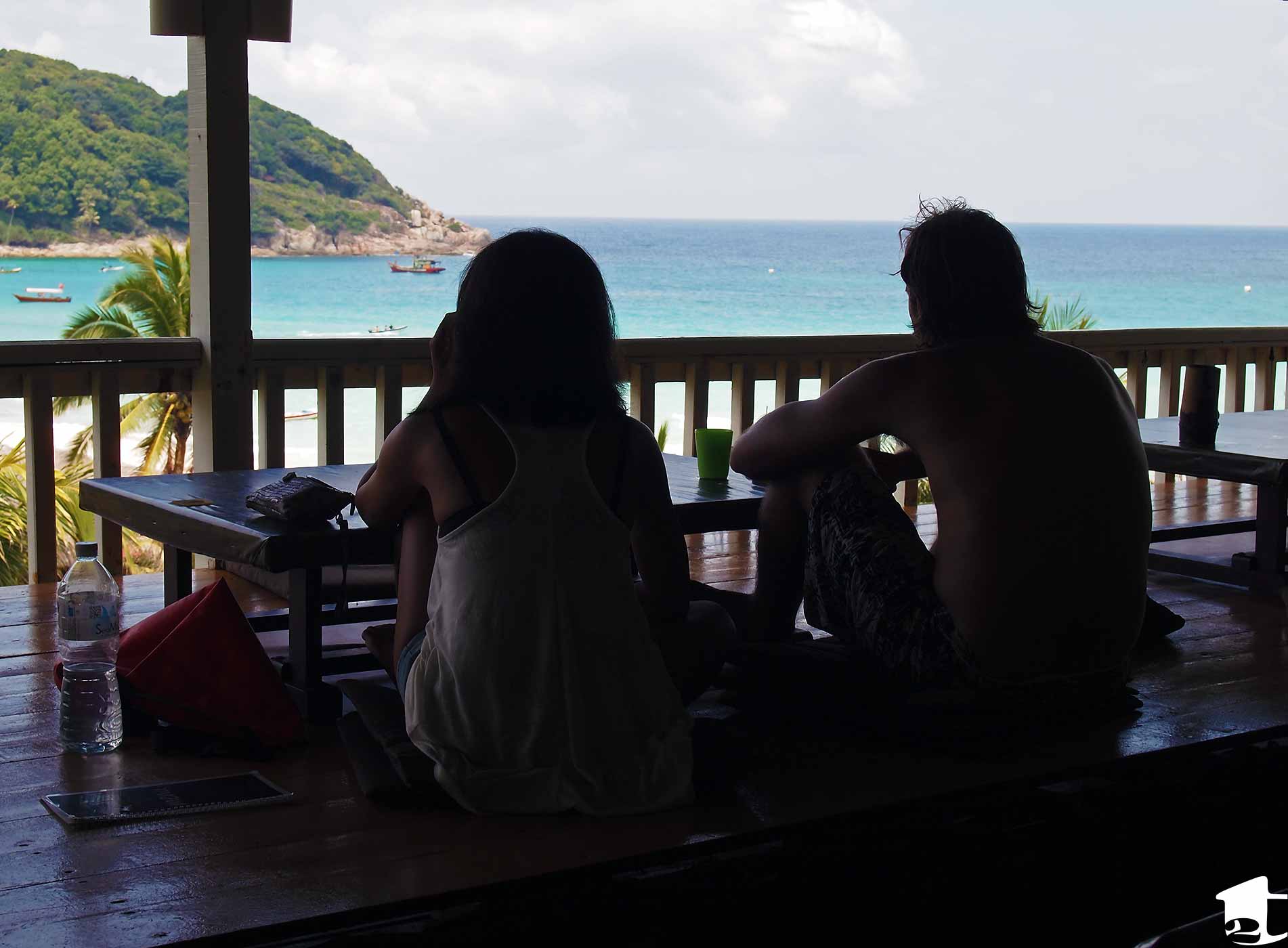 Mike and Trang looking out at Perhentian Kecil.

It was Mike’s and my first taste of a Southeast Asian island: Golden sand beaches outlining a lush jungle island. Monitor lizards lazily crawling around. Tons of fish nibbling coral under clear water that, despite being saltwater, felt clean. Night performers swinging flaming batons toward the black cloudless sky. Carefree islanders who, when we asked about accommodation availability, told us, “Right now we’re booked. I don’t know who’s checking out tomorrow, or if anyone is checking out.” No worries. Terima kasih. Thank you.

For not thinking we’d wind up in Malaysia, we’re certainly glad we came. We made new friends, and the country gave us a nice taste of cities, jungles, beaches, night markets and hawker stalls. Not to mention some of the best food we’ve had on this trip.

READ ABOUT OUR TIME IN MELAKA AND KUALA LUMPUR.