After leaving Bagan, Myanmar, we grabbed a bus to Kalaw, a small hill station that serves as the starting point for treks to Inle Lake. We wanted to visit Inle Lake and had heard trekking (also known as hiking for our American readers) was a pleasant and leisurely way of getting there. Lucy and Isabelle (the two French girls we toured Hpa-an with) had recommended doing this inexpensive and fun (and non-bumpy) bus alternative to travel to Inle. 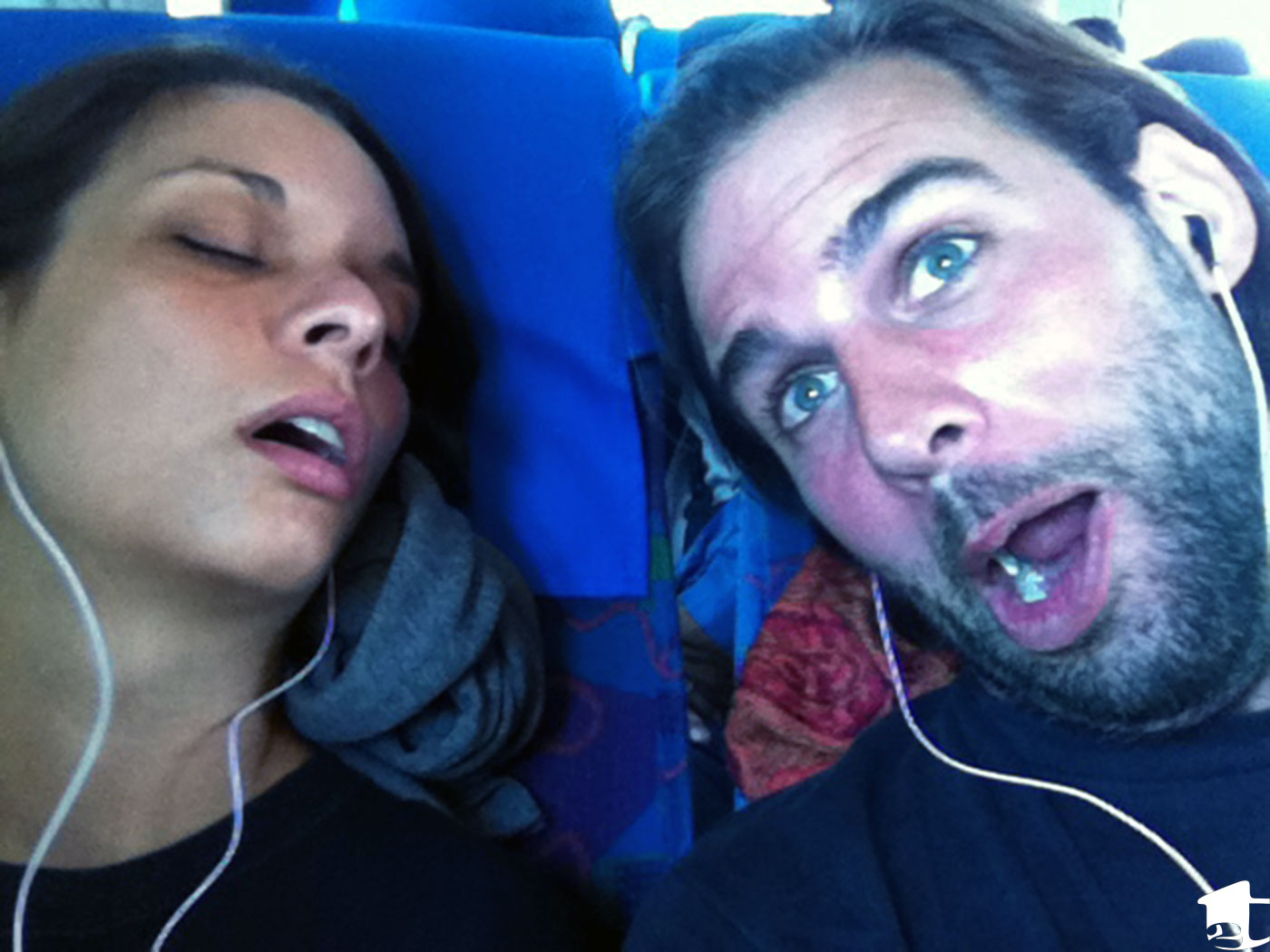 Fun on the bus from Bagan to Kalaw.

There were numerous trekking guide options online and in guidebooks, so while we were not afraid they would all book up, we called ahead to Sam’s Trekking just in case. Sam also owns a restaurant and told us to meet him there when our bus got in. The ride was not as bumpy and miserable as others had described, though the AC did mysteriously “break” a couple hours in. When we reached Kalaw, we piled off the bus with a few other foreigners. Immediately, we were inundated with people offering their services as guides. They ranged from people we had heard of with bona fide cards to scrubby characters with handwritten business cards. Sensing an opportunity to perhaps pay less per person, we collected everyone’s contact information and walked to our hotel to check-in.

Golden Kalaw Inn was a short walk from the bus stop, though Kalaw is small enough that every guesthouse and hotel is an equally brief walk. For $12USD, we got a double bed with ensuite bathroom, access to a shared balcony and one of the best breakfasts of our Myanmar visit (you could choose between Western, Indian, Shan noodles and mohinga). There was no fan in the room, but due to the higher elevation, there was no need since the air was cool and breezy. This was a welcome change from the hot heat we had experienced in Myanmar thus far.

Since we traveled in low season, there were very few foreigners in Kalaw, which means gathering a group to trek with (to reduce the per person cost) was not easy. Although each guesthouse offers their own guide services, ours seemed sympathetic to our desire to find a cheaper option since no one else had signed up with them yet.  The lack of pressure was a nice relief from the hard sell some guesthouses apply when it comes to booking tours.

Down the street from us was Sam’s Family restaurant and we popped in as promised. As we waited for Sam to arrive, we were served hot tea with sesame seeds (our first of the day). Admittedly, when I first saw Sam I was surprised. While he seemed in good health, hiking with a senior citizen was not on my bucket list unless Tara was the senior citizen. But his enthusiasm won me over and his knowledge of the region made me feel comfortable with the situation. (It later came out that he would not be our guide, he just makes the arrangements.) 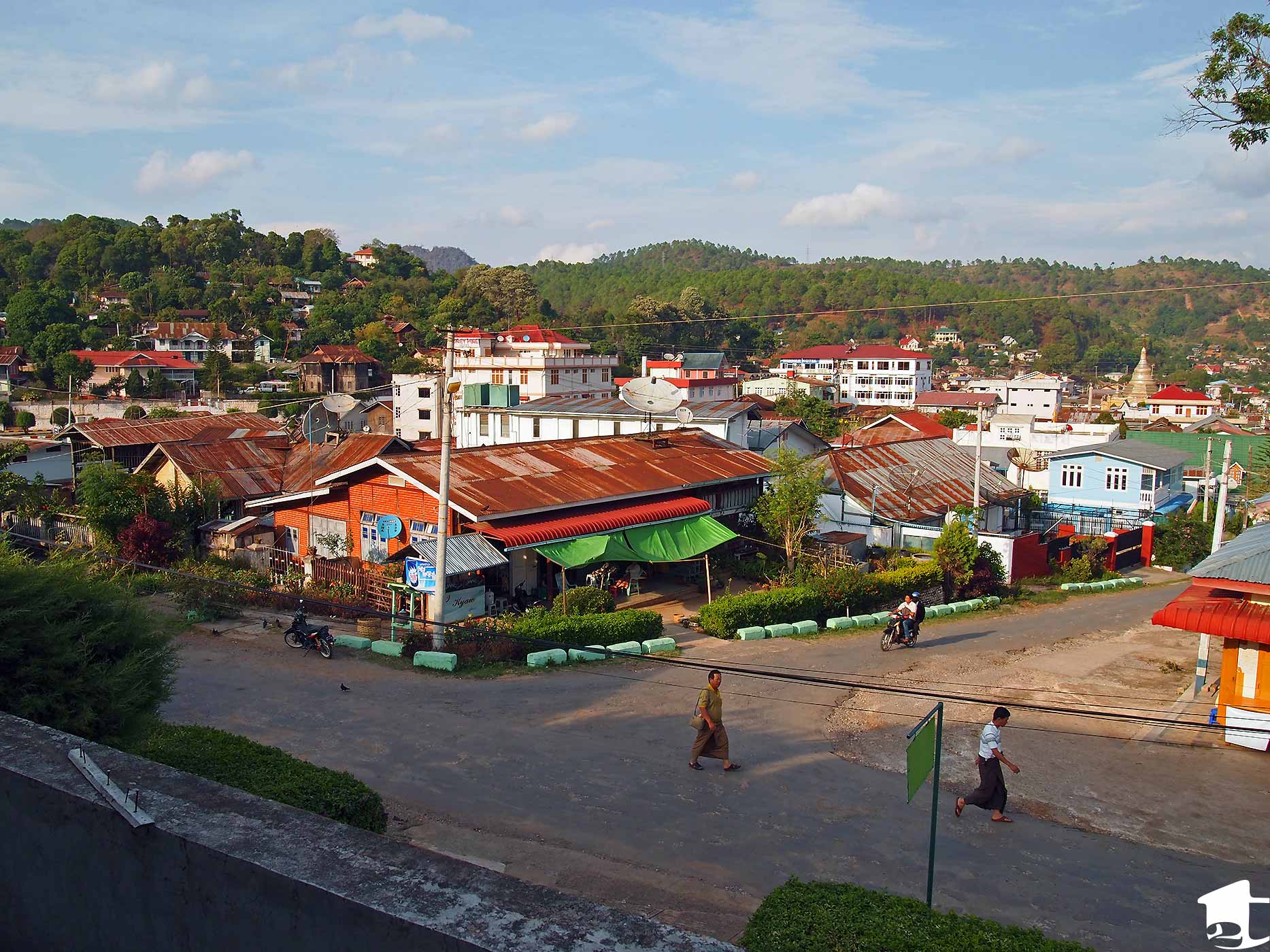 View of Kalaw from the balcony of our guesthouse.

Initially, Tara and I had talked about doing a 2-day, 1-night trek, but after we asked Sam about the 3-day option, the 2-day seemed to be more expensive and far less interesting (the shorter trek involved taking a taxi, at an additional cost to us, in order to cover more ground). The 3-day, 2-night trek had more to see, more villages to explore and was nearly the same price per person per day. After a long description of what the treks entailed, we conferred and told Sam we wanted to do the 3-day, 2-night trek beginning the next morning. Just as we told him which trek we wanted, he received a phone call and said he was sorry but the person on the line was interested in trekking the next day and he had to honor phone requests, even though he admitted he did not know if the person would show up that night to confirm. Tara and I were bewildered. Here we were, ready to sign up for the next day, cash in hand, and were basically being shooed away. Tara even said, “But we called ahead, too.” For a minute we sat stunned before Sam told us to come back in a couple hours, essentially saying that we should “shop around.”

As we walked out, we were ready to find someone else to trek with, but first we had to find them. One of the cards we had was for Thu Thu at Ever Smile Trekking Agency. We had read about a Thu Thu, so we went to her “office.” Her small room was perched on the second story of a restaurant. You could immediately tell that Thu Thu had seen an opportunity to provide a service but was doing so out of her living room. We did not have a problem with this, so we kicked off our shoes and sat down. Pulling out a map, Thu Thu traced the same route as Sam. There were subtle differences, though: Sam had us staying in homes in villages, while Thu Thu stayed in monasteries (a common decision by guides to save money, though monks are said to collect mandatory donations from guests). Ultimately, we found ourselves in a position where we were expected to pay a higher rate since we were not part of a group. So we amicably told her we would think about it and walked to The Golden Lily guesthouse to test our luck with their services.

If we thought the end of our interaction with Sam was bizarre, nothing prepared us for what we were about to find at The Golden Lily. Listed in Lonely Planet, and reviewed favorably online, we expected this to be a good alternative to Sam. The Singh family runs the inn, and we had received a card from one of the brothers, Ramu, at the bus stop. Ramu said a group was leaving the next day for a 2-day, 1-night trek. This pushed the daily cost down significantly enough to where we were considering this option. As we weighed whether to cut our trek short, we were served hot tea with sesame seeds (cup two). The conversation was a soft sell – if we wanted to join the group tomorrow and save a few dollars, we were welcome. We could opt to go through them for the 3-day, 2-night trek, and the cost would be the same as the other guides offered. 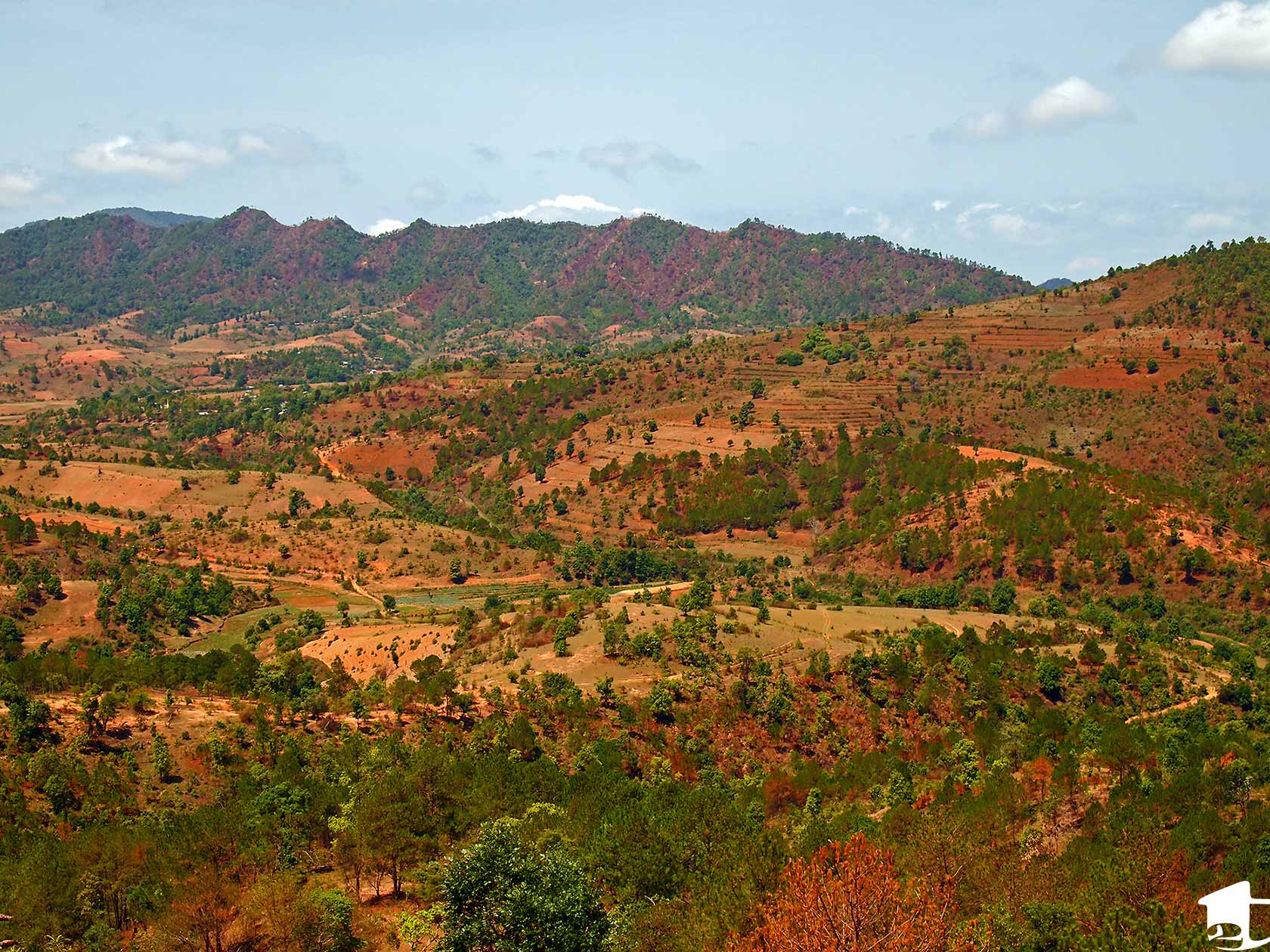 A view during our trek. But who did we choose to trek with?!

Overall, the mood was light and Tara and I did not feel any pressure to book with them. This all changed when Ramu asked if we had spoken with Thu Thu. We admitted we had, to which he pulled out a comment book. He asked if we spoke French, then pointed to one of the pages that had a three-year-old review in English. Um, ok. The review described how this person had arrived by bus and was approached by Thu Thu. Apparently Thu Thu had slandered The Golden Lily and just about everyone else in town. The writer had felt uncomfortable and eventually booked through The Golden Lily; she described the trek and how much she enjoyed it. This all felt staged, and we didn’t like that he was badmouthing his competitors. I was beginning to feel offput, but Ramu instead took this as a sign that I wanted further encouragement that The Golden Lily was the best option.

“Do you know the military owns or has partial ownership in almost every guesthouse in Kalaw?” Tara and I shook our heads that we did not. Ramu then began to describe how the military was into black money in Kalaw, primarily through the sale of opium. He complained how their family was being taxed unfairly while properties that the military had a vested interest in were able to flourish. And here was the second time he bad-mouthed a specific enterprise – Golden Kalaw, our guesthouse – by saying they were part of this scheme too. This one-sided conversation went on for a while. Tara seemed confused, and while I was following what he was saying, I did not understand why he needed to tell us. What did this have to do with trekking? Twenty minutes later, he wrapped up. Tara and I looked at one another and told him we would think about it.

After returning to our guesthouse, Tara and I discussed what seemed like pitiful options. The whole vetting experience seemed like a failure, but we had hope that Sam might reconsider if we waved cold hard cash in front of him. The worst-case scenario would be to book through our own guesthouse. Hours later, as promised, we went back to Sam’s restaurant to find out our fate and found four other foreigners sitting around. Sam greeted us, “Okay, we are all here.” Cue more confusion from Tara and me. 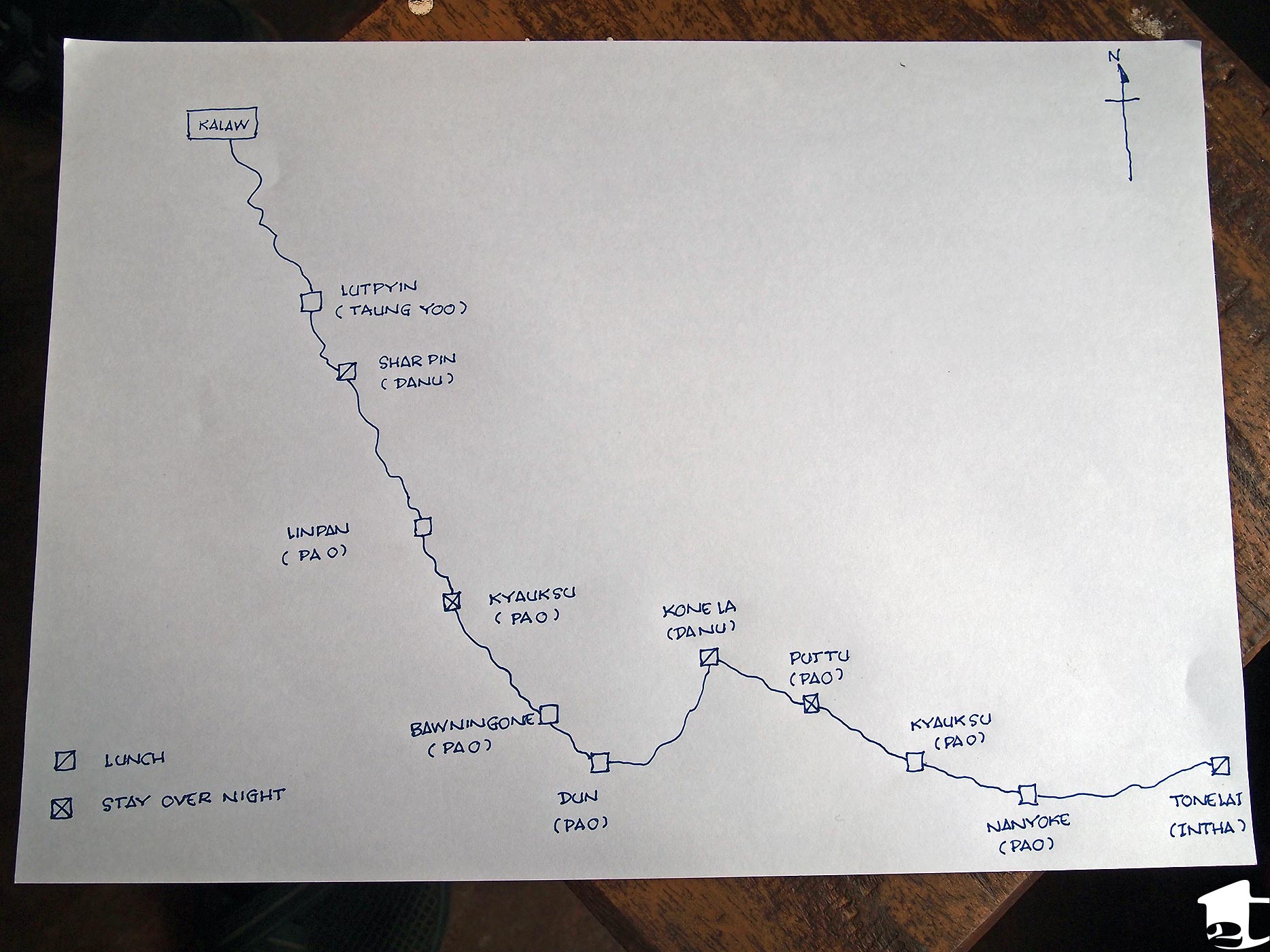 Sam motioned for us to sit, and glasses of hot tea with sesame seeds (our third cup of the day) were placed in front of us. We were introduced to the four others sitting down (three Swiss citizens and Canadian, though they were traveling as two separate couples). Apparently, Sam had expected us to return and told the others we were taking the 3-day, 2-night trek starting the next day. With four other travelers, the price of the trek dropped significantly. The only rub was that we had to choose a route for the first day. The six of us seemed evenly split on which way to go (one route involved a lake and tea fields, but it was more strenuous than the second option), but finally we all agreed on the less taxing path.

Since we were traveling as a group of six, it pushed the per person price down to 36,000 kyats, ≈$40.63USD, for the three days (or 12,000 kyats, ≈$13.54USD, per day). This price included an English-speaking guide, all meals provided, accommodations for both nights in a village home, transportation of our large bags to our Inle Lake hotel and the cost of a boat tour across the lake. The whole process of finding a trekking guide was filled with confusion but eventually ended with us on an enjoyable trek with fun people (also long-term round-the-world travelers!). But before that happened, Tara and I decided to have dinner at Sam’s Family Restaurant. After grabbing menus and relocating to a smaller table, we were greeted with one last round of hot tea with sesame seeds.