Myanmar seems familiar. Village children run out of their huts to say hello (mingalaba) like we experienced in Zambia. Pavement is uneven, debris litters the ground and paint peels off aging buildings like those in Egypt. Even the people are a beautiful mix of Indian and east Asian. We continually want to compare the country to other places. Maybe it contains a smattering of similarities from cities we’ve visited, but like everywhere else in the world, this combination of traits makes Myanmar unlike any other place.

For those looking to visit or just curious about the culture, here are some aspects that may invite culture shock or a feeling of familiarity. 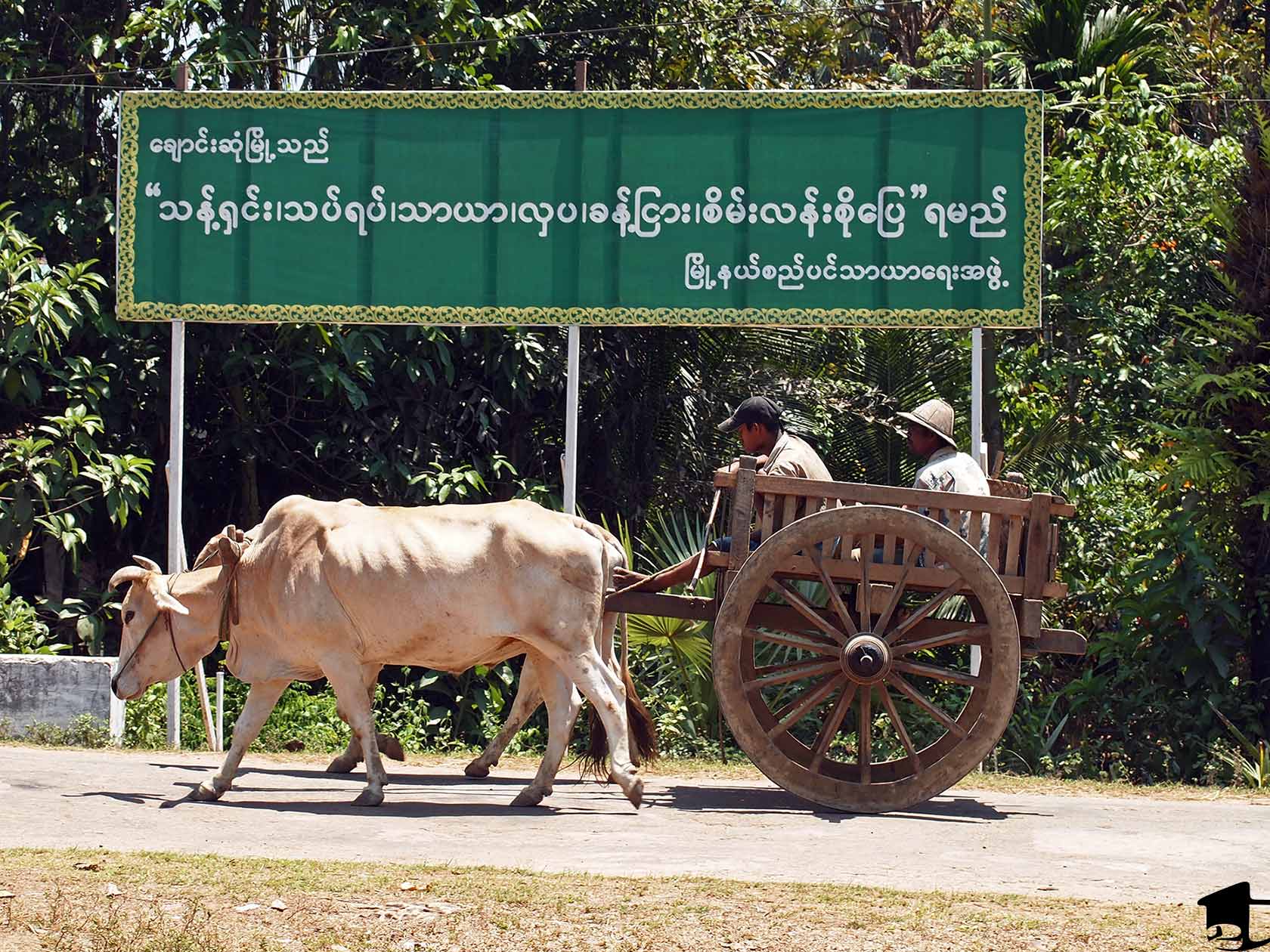 Not an unusal sight in Bilu Kyun (Ogre Island).

1) First, Myanmar is pronounced mee-an-mar, not my-an-mar. (Find out here why we say Myanmar and not Burma.) The name means “quick strong.” “Myan” means fast or quick, and “ma” means strong. The Burmese language doesn’t use the “r” sound, so the r at the end of Myanmar is an Anglicized version.

2) Approximately 90% of the population is Buddhist. Therefore, the country is filled with pagodas, reclining Buddhas, monks and nuns. The large population of monks is due to males being expected to become a monk at least once in their life to show their devotion to the religion. The first time will be when they are young, and they are referred to as novice monks (but we like to call them little monks). Fun fact told to us by our trekking guide: Many monks are asked to leave monastic life as a result of breaking their vow of celibacy.

3) Thanakha, a beige facial cosmetic and sun protector made from ground tree bark mixed with water, is worn by both men and women. It’s applied mostly to the cheeks, but sometimes also on the nose and forehead. Some people take great care applying it artfully while others wipe it all over their face and arms. 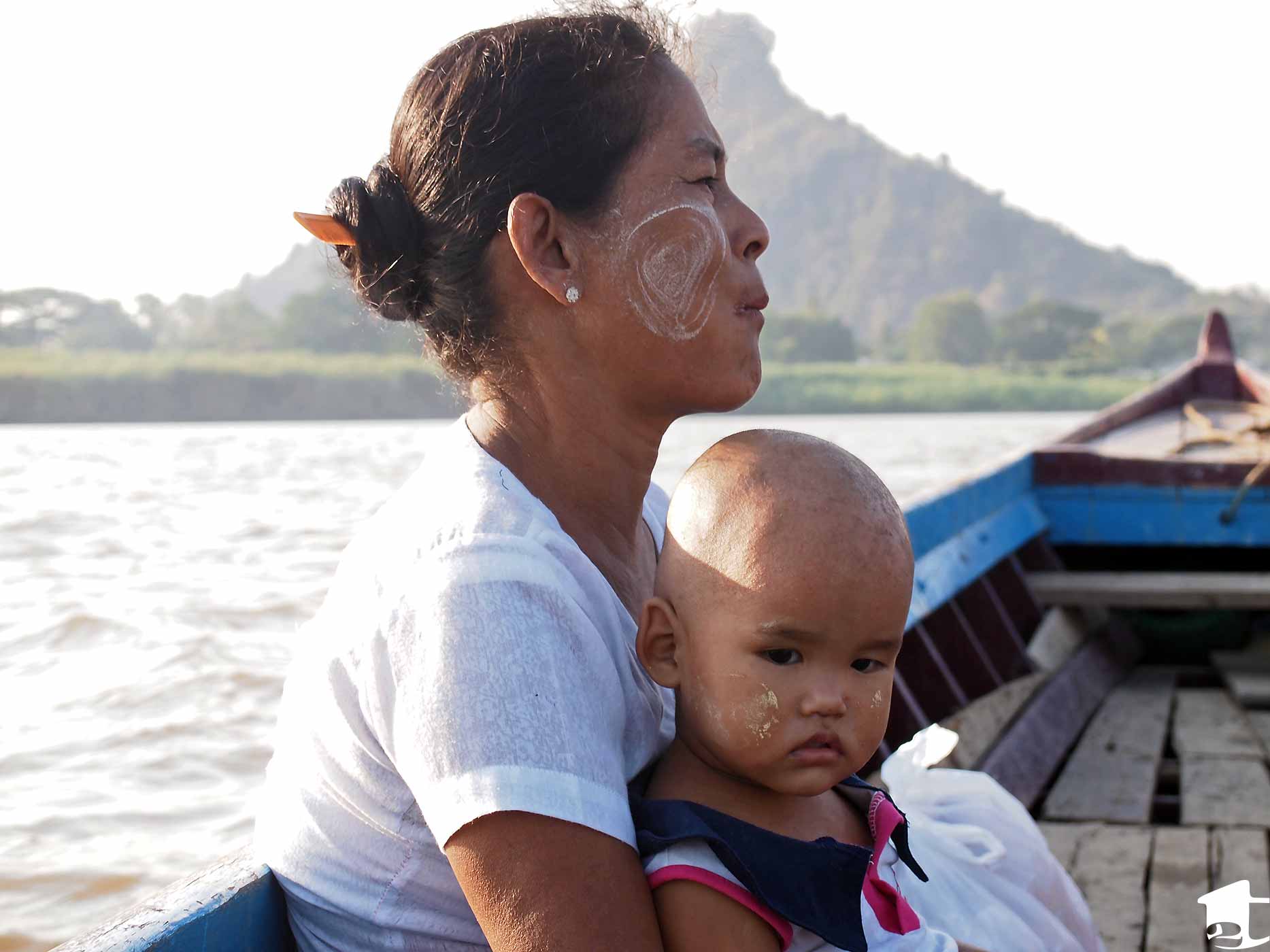 Bark from thanakha trees is ground into a stone tablet with water to create a paste. With one’s fingers, the paste is applied to the face, with extra usually spread across the cheeks.

4) Men and women both wear longyi (pronounced lon-gee), a type of sarong that’s sewn together to make it circular. Each gender has their own particular way of securing the garment (men tie in front, women to the side). Styles for men typically include darker solid colors or a checkered pattern. Women wear more lively styles that might have flowers, swirls and multiple colors. Some patterns are traditional and only worn during special occasions.

5) It’s a sandal/flip flop/thong/jandal country. You’d be hard pressed to find someone walking down the street wearing sneakers. Reasons for this may include: sandals are cheaper than sneakers; cooler in the Myanmar humid heat; and/or you must remove footwear often — when entering some businesses, homes and all temples.

6) They mostly use the imperial system of measurement (they use their own traditional measurements for weight). We found this out on our first day. Tara brought a map to the receptionist and asked, “Is this about two kilometers away from us?” She replied, “I only know miles.” “Me, too!” Tara excitedly responded. Ahhh, feels like home.

7) In a move to distance themselves from their former colonizers, they drive on the right side of the road. But many cars from colonial times are still in use and others are Asian brands that have the steering wheel on the right side instead of left. Makes for an interesting highway journey.

8) They are reclaiming old names of cities (e.g.: Bago versus Pegu and Yangon versus Rangoon) that the British changed during colonial times. That’s why the Yangon International Airport code is RGN.

9) They’re very respectful in their interactions with others. With a slight bow, they always extend their right arm to offer or receive anything (food, money, a receipt, purchased goods, etc.) and touch their left hand to their right elbow. The left hand is never extended because it’s considered the dirty hand (think toilet use). 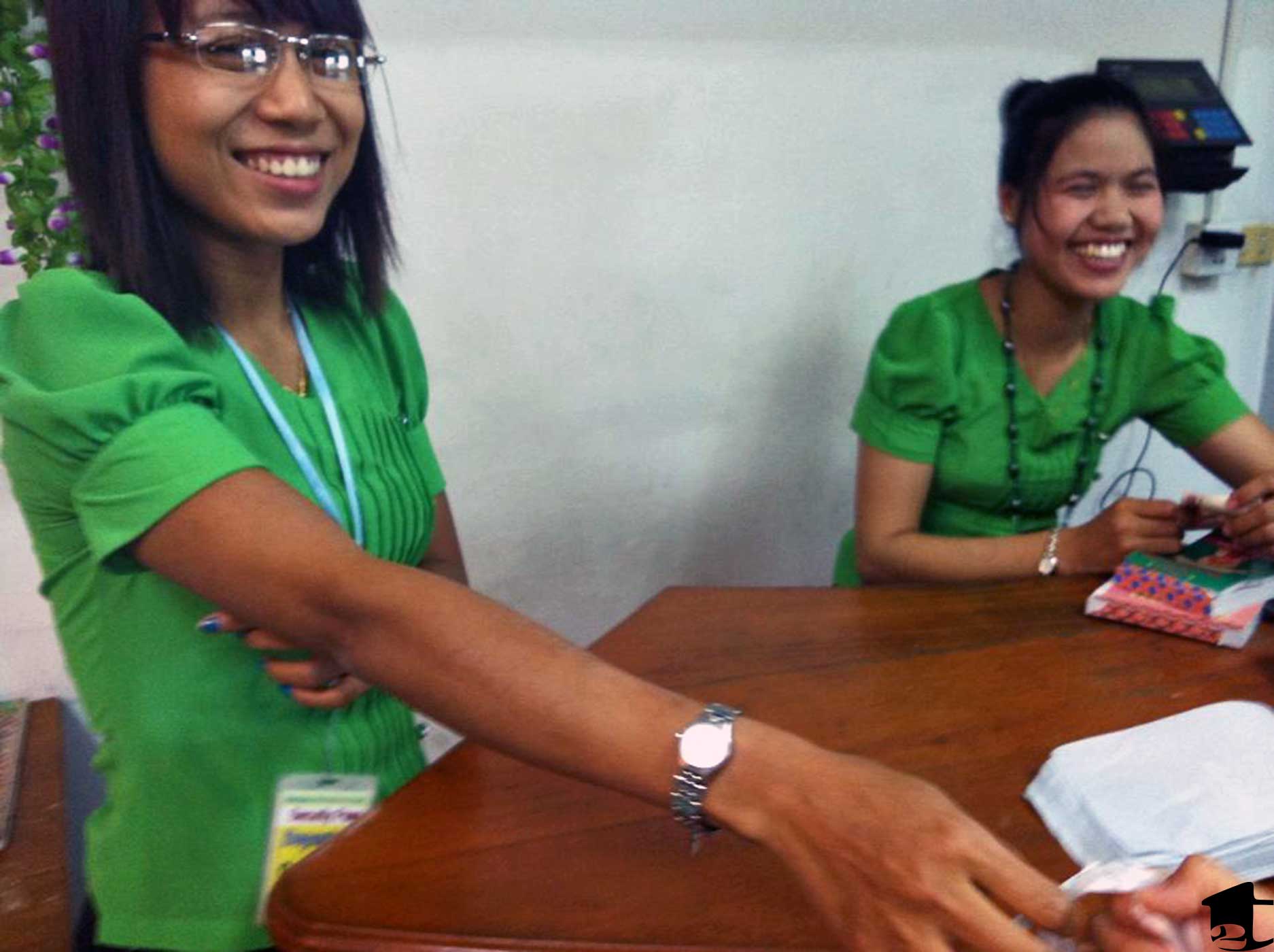 Yes, she’s holding this pose for the photo, but don’t you prefer to see the polite gesture than just read about it?

10) The people of Myanmar have very, very sensitive stomachs. Vomit bags are handed out on bus rides and used often. We saw multiple people getting sick on what we considered to be a smooth bus ride. And on a rocky ride up to Mt Kyaiktiyo, a child near us threw up on the man in front of him. Yikes!

11) And probably because they have such sensitive stomachs, the local food is not spicy. We encountered a couple dishes that were mildly spicy (and sometimes chilies and garlic are offered on the side), but this is nothing like Thai food. It can be, however, quite oily.

12) Speaking of food, do you know how they get a server’s attention? By making a kissing sound. If you’re at a teahouse and the table of men next to you start smooching, don’t worry, it’s not for you!

13) It is popular for men and women to chew paan. Calcium hydroxide is spread on a betel leaf, then topped with cut up betel nut (from the areca palm) and usually tobacco (other options, like cloves, are available too). It is then folded into a little square that is chewed. Depending on what you choose to put inside, the mixture can act as a mild intoxicant or a stimulant. Supposedly it can also lessen tooth pain.

Years of chewing this addictive package has stained many teeth red, and you may mistake them all for vampires when they talk or smile. Like chewing tobacco, it causes excess saliva and the ground is also spotted red from everyone spitting. Paan causes many cases of throat and tongue cancer. 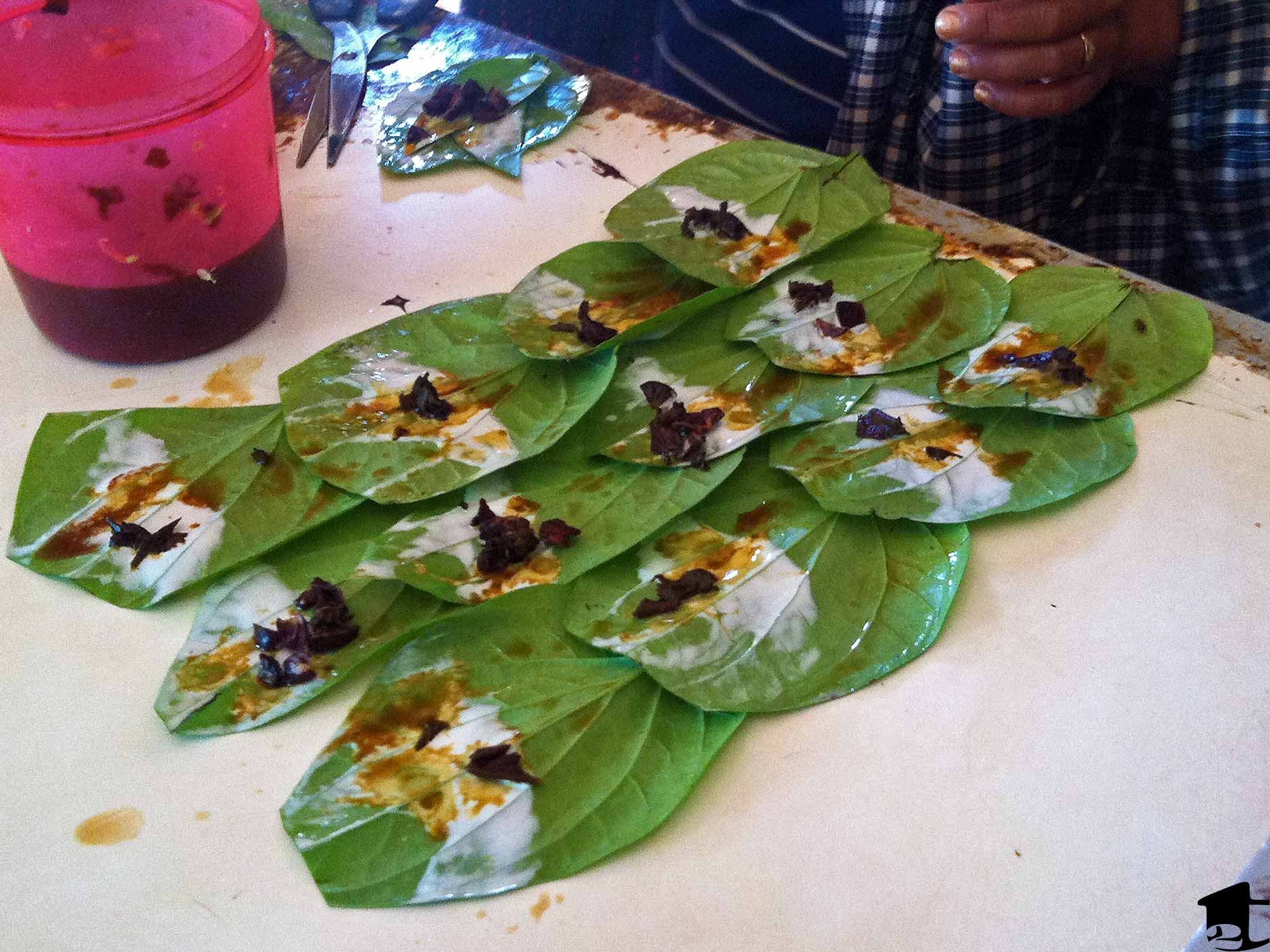 14) Littering. Trash covers all public spaces, from sidewalks to bridges to river banks. There are more garbage cans than we saw in India, so we’ll give them a point there, but locals have no qualms about chucking trash from a ferry into the water or out the window of a bus.

15) Daily power cuts are common in all towns and cities and the voltage can fluctuate and fry electronics. Higher-end hotels have power regulator boxes for air conditioning units and televisions that you can and should use when charging electronics.

16) They love chinlon. It’s a game that involves kicking a small woven rattan ball using only your legs and head. Sometimes they play in a circle and it resembles hacky sack. Another version of the game (called sepaktakraw) resembles volleyball with three players on either side of the net. They pass the ball to each other and try to score on the opposite side, again not using their arms or hands. 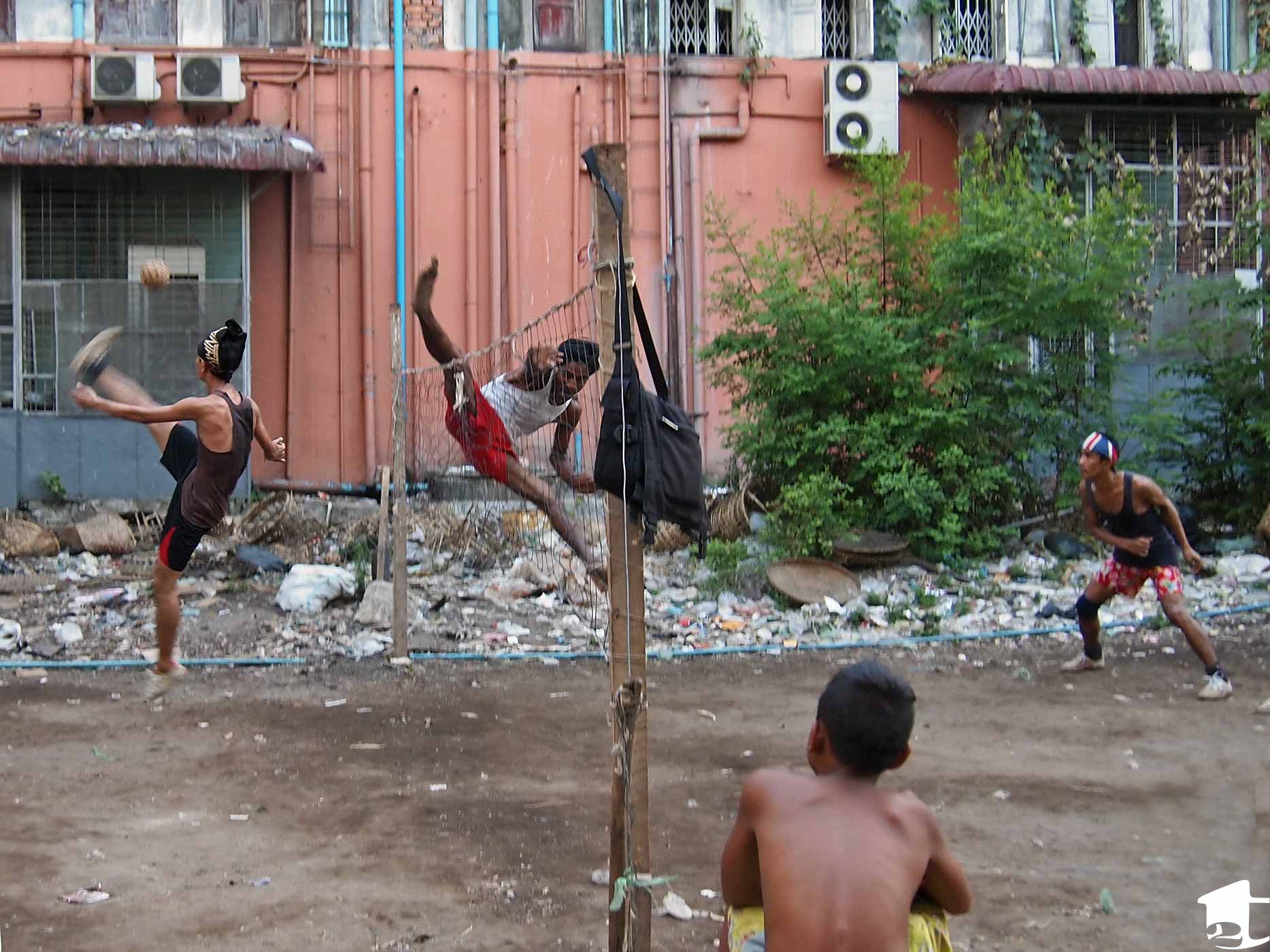 Men playing chinlon in the backstreets of Yangon.

17) For other early visitors to the country, this may be one of the most important points: You’re the ambassador for your country. You may be the first person a local meets from that country. Smile, be kind, say hello in their language (mingalaba) and practice responsible tourism.

Similarly don’t let yourself get scammed, ripped off or taken advantage of. We’ve met some businessmen who are very honest and others who aren’t. If they think foreigners are easy to take advantage of, Myanmar will be the new India or Thailand, with local and foreign prices for everything from food to transport. We know many people are torn about how to handle beggars, but giving them money will only encourage a begging culture. If you want to help the locals, donate to an organization that will use the money to support them.