Six years ago we coined the term “beercation.” Though this term came as the result of one singular trip, over time, we have found ourselves traveling to a location for the sole purpose of enjoying the local breweries (like we did in Denver last year). Rehoboth Beach, Delaware, is one of the locations we visited during our first beercation, and it continues to call us back.

Our favorite brewery, Dogfish Head, is a short drive away in Milton, and their brewpub in downtown Rehoboth Beach is where the company first started. It’s one of our favorite places to visit because we can try exclusive limited-time brews, purchase limited-edition bottles, fill up growlers of brewpub-exclusive beers, and be entertained on some nights with live music. Fellow bargoers are always enjoyable to chat with too. We always strike up a good conversation with those around us. It’s only a 2.5-hour drive from D.C., so when Tara suggested we celebrate my birthday there, I agreed it would be a great getaway. 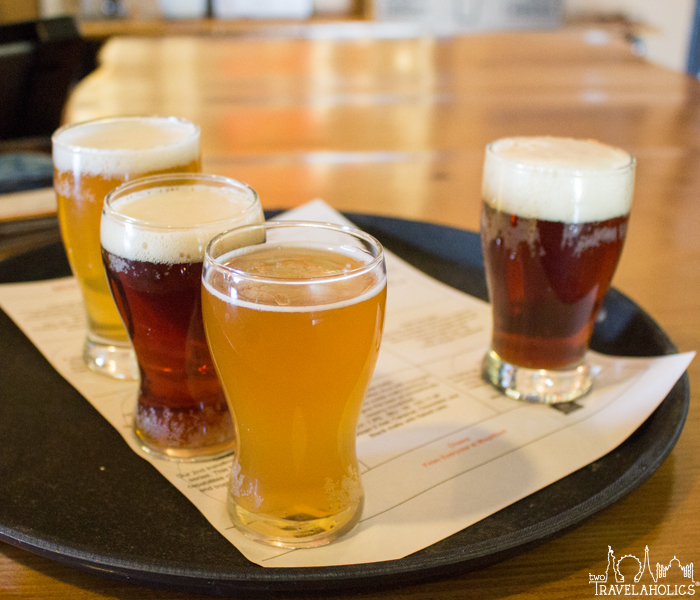 The truth is, we’d be content with planting ourselves at the Dogfish Head Brewpub for the duration of our beercations to Rehoboth Beach (which is actually what we normally do in Rehoboth). But since variety is the spice of life, we branched out this time to visit Mispillion River Brewing, 16 Mile Brewing Company and Big Oyster Brewery. The main advantage to taking a beercation versus buying a variety of bottles at a liquor store is to try the small-batch runs of experimental beers that these brewpubs offer. These are often only made one time, and once the keg or kegs are gone, that’s it. There is a chance that a popular small-batch beer might go into production as a seasonal brew or even in regular rotation – but the majority are one and done.

We were in Rehoboth for a long weekend but decided to make Saturday the day Tara would act as our designated driver and ferry me around to all the breweries. We started at Mispillion River Brewing since it’s the farthest out. My plan for the day was to sample everything on tap. Luckily, most breweries understand this desire and offer flights with 4-ounce tasters. Mispillion River had 12 different beers on draft and, most impressively, they also offered a cold-brewed (non-alcoholic) coffee called Coldcaine that lived up to its name. After a tiny shot glass of Coldcaine, we were ready to run around the building. Since we were there early in the day and in the off-season, it wasn’t crowded and the bartender was willing to tell us about the brewery’s history as well as the history of their beers. After sampling all their brews, the bartender offered to show us around the back where the magic happens. Their brewing and canning area had a couple large tanks, but overall felt intimate. Several refrigerators held quarter-kegs of small-batch beers, making it the antithesis of a big-name beer factory. Ultimately, beers themselves were solid and inexpensive ($2/sample), making it well worth the stop.

Next up was 16 Mile Brewing Company, whose name dates back to the 1700s when Georgetown, the brewery’s location, was “16 miles from anywhere.” It was pretty filled when we got there (now early afternoon), but we were able to snag the last two open barstools. Sticking with my game plan of trying as many different brews as possible, I started making my way down the menu. While the last brewery seemed fixated on IPAs and ales, 16 Mile seemed to offer a slightly larger variety, particularly in heavier, darker brews. Additionally, they stuck with the 16 theme and had sixteen beers on draft.

Their porters, stouts and Russian imperials were high ABV beers and had me a little worried about how I would last the rest of the day. I balanced them out with lots of water, which is key to daydrinking. Each of their dark beers was memorable in its own way, but the Oyster Stout in particular was delicious and luckily available in bottles outside the brewery too. In addition to their impressive selection, 16 Mile’s slogan is “Craft Your Escape,” which is similar to the title of our book Create Your Escape. This, of course, necessitated a purchase of one of their branded pint glasses. 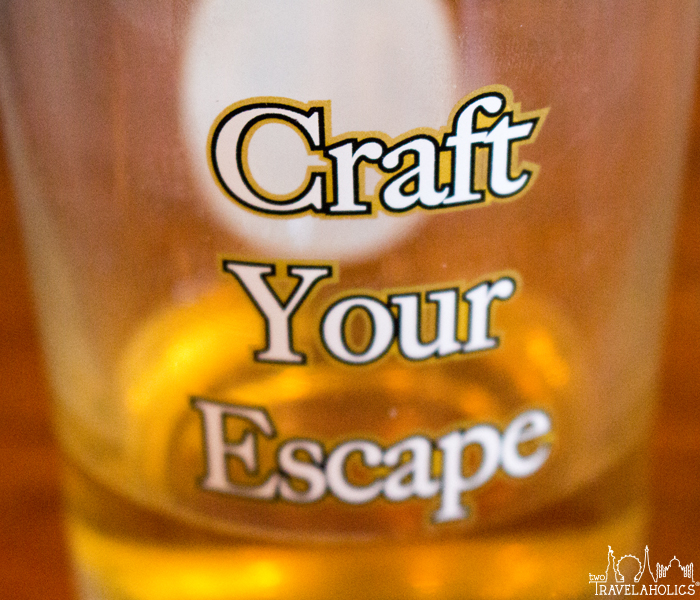 Our first two breweries didn’t offer any food, and our stomachs were grumbling. I wisely packed a couple granola bars to munch on throughout the day, but nothing substantial. Luckily, we planned ahead and timed our departure to coincide with our third stop’s happy hour. When we arrived at Big Oyster Brewery/Finn’s Ale House, we chowed down on fish tacos and fish ‘n’ chips, as well as oysters and clams from their raw bar. Nothing beats Finn’s happy hour!

There are two Finn’s locations in the Rehoboth area. The Ale House on Coastal Highway has Big Oyster Brewery connected to it, so they brew on the property. In downtown Rehoboth Beach, there is Finn’s Raw Bar, which carries Big Oyster beers and offers the same delicious happy hour, though the beers aren’t brewed there. Being that it was Valentine’s Day weekend, they had a cocoa-strawberry stout that really needs to be produced on a larger scale (it was a limited edition). Their other choices were also excellent, but I knew I would tempt fate and sobriety if I went down their beer list, so I slowly sipped the stout and ate an array of tasty dishes. As opposed to the other breweries, this one is an actual restaurant, so it’s a great location for eating and drinking, but it didn’t have the atmosphere or exclusive beer perks of a brewpub. That honor went to our last stop of the night.

After wrapping up at Finn’s, we dropped our car at the B&B we were staying at and walked the few blocks to Dogfish Head Brewpub. They offer a vast selection of Dogfish Head year-round beers and seasonal and limited-time beers, but the main reason we love visiting is to try their exclusive brews. This is the only Dogfish Head brewpub location that offers exclusive one-time-only beers. These sometimes one-and-done brews are consistently amazing – a testament to Sam’s 20+ years of experience. A couple beercations ago, we sampled a Delaware Pale Ale (DPA) made with herbs that gave the impression you were having a light salad (which may raise eyebrows, but Tara and I agree that it was one of the best beers we have ever had). This time around, Tara fell in love with Pants Are Cumbersome, which is a rare sour collaboration with Burley Oak, a Maryland brewery. I found myself enjoying the Liquor de Maltstrom a malt liquor made with Colorado roasted Hatch Chiles, Huitlacoche, chulpe, flaked corn and hominy. You could actually taste the chiles instead of just feeling their heat. However, we made sure to try all the options, which required five flights (their flights consist of four samples).


Ultimately, that is what a beercation is all about to us: trying new beers and seeing what else is out there. Rehoboth Beach is a fantastic place to experience your own beercation. Unfortunately, snowy weather limited the number of places we were able to visit this time around, but we already have a list of new (to us) breweries to try next time, like Hammock Brewing and Dewey Beach Brewery. We’ll keep going back regardless of what the weather is like outside, because we know that inside the beer will always be cold.
Share this Post