Think about how you choose where you eat out. Do you head straight to Yelp or foodie websites and see what top-rated restaurants are around you? Do you wander around and walk into whatever place looks popular? Bangkok has been a favorite city of ours to just eat our way through since we first visited a few years ago. There are certain food stalls and restaurants that we will always be drawn back to. Unfortunately, since we don’t speak or read Thai, we’re limited to what and where we can order. Pointing works for street food, but when you’re handed a menu that’s written completely in Thai without pictures, it’s just not practical.

We also like to understand the context and culture behind dishes. Learning how a dish was created and how it evolved will give you an unexpected history lesson. When we took a cultural cooking class in Singapore, the history of the recipes were incorporated into the process of learning to make them. When we found out about Taste of Thailand’s food tours, it seemed like a perfect fit for us. It’s essentially a walking tour that constantly feeds you while teaching you about their culture and history (they currently offer three different options that vary in terms of times and locations). 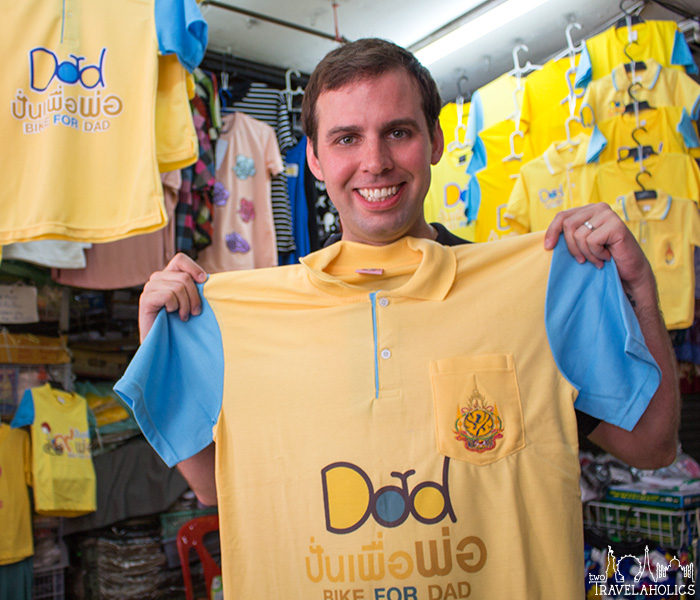 We ended up choosing the morning Bang Rak or “Village of Love” tour, and they were able to cater to our pescatarian dietary requests. The tour began at 10 a.m. near the Saphan Taksin BTS stop for our small group of seven people. This made for a great dynamic, as our tour guide, the experienced Khun Benz, was able to interact with all of us and easily answer questions we had as they came up.

Walking north a half block from the BTS stop, we came to a pickup truck that doubled as a drink and food truck. Here we tried banana with chocolate sauce wrapped in roti (roti means bread, and this version was a soft but thick variety, similar to naan) and iced pulled tea (“cha yen” in Thai), which was a delicious way to start the day. (The process of making the pulled tea looks similar to how Moroccan tea is poured. Our barista used the length of her arm to transfer the liquid from pot to cup and back and forth again).

What could have been a simple walk from one snack to the next was enhanced by Benz’s knowledge of our surroundings. The neighborhood had great significance to locals as Buddhists, Christians, Hindus and Muslims all have venerated places of worship coexisting within a couple-block radius of each other. At the same time, a location from the film “The Hangover 2” was also located along our route. The tour veered from pop culture to true Thai culture and history. Popping into a narrow side street, we were introduced to several people making kilos and kilos of red and green curry paste. The paste from this small, nondescript shop was going to be picked up shortly and delivered to nearby high-end hotel restaurants and others around the city. Freshly made curry paste is so incredibly fragrant that we had to hold ourselves back from eating it then and there.

Luckily, we were already on to our next bite, a fish cake on a stick. Fried but soft, the skewered cake had the consistency of a firm tofu but packed a delicious punch. Sold to us by a vendor in a narrow alleyway, there was no chance we would have ever know what she was selling much less work up the courage to try and order from her.

And so the rest of the tour went in the same vein: Benz ushered us into a restaurant or store and explained what we were about to try – and why this drink or that food was important to Thai culture – before we moved to the next location. More than half of the places were street vendors, and we had no “digestive” problems with anything we ate during the tour (a side note: Bangkok street food is usually fine for Westerns to eat). The other half of the food locations we visited were small restaurants, but that was not always outwardly apparent, especially to Westerners who are used to restaurants posting large signage out front.

One such place we stopped at was Prachak Pet Yang, a Chinese institution. First opened in 1909, it is known for its roasted pork, duck and freshly made egg noodles. Benz escorted our group to a small private room on the second floor. This was another aspect where the tour shined. We could have just been separated and seated among other diners, but every stop was orchestrated in advance. The food was brought out almost immediately after we arrived, and we were able to be seated as a group so we could get to know each other and talk about the food.

Our last stop took us to Thanying, a restaurant owned by the sister of King Rama VII. It was much fancier than every previous eatery (after all, we were eating street food at times), but it was the perfect finish. While we waited for our last meal together, Benz explained to us the history and significance of the King to the Thai people, which was important since his birthday was just a few days away (an event that all of Thailand was preparing for). She also told us that Thanying had not only served Thai royalty, but the current King of Sweden and his spouse are particularly enamored with the cuisine they prepare. Our meal consisted of jasmine tea, green curry soup with white rice and pumpkin sticky rice for dessert. The curry was incredibly flavorful without being too spicy – a usual trait of green curry – because royals, we learned, are never suppose to sweat from the spiciness of any dish. 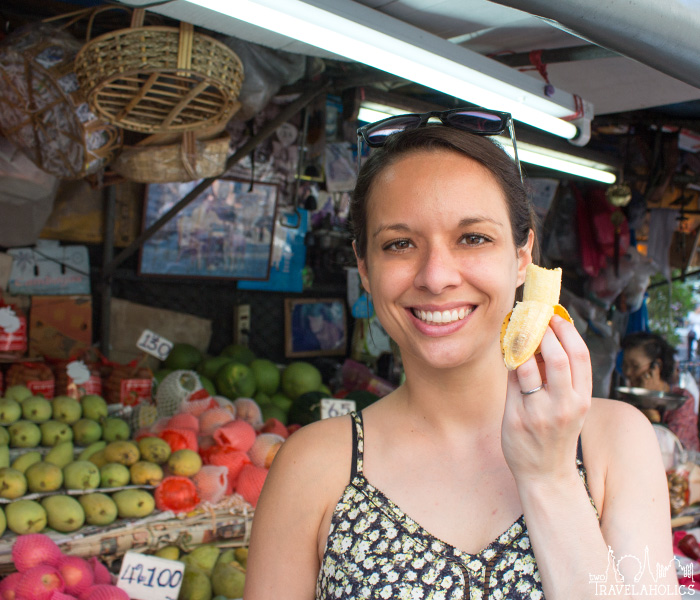 Ultimately, the 3.5 hours flew by way too quickly. The amount of food, drinks and information thrown our way filled our brains and bellies and made this is a top activity we recommend everyone heading to Bangkok.

Disclosure: We received a tour discount from Taste of Thailand in exchange for sharing our experience. As always, all thoughts and opinions are entirely our own. The walking tour was truly an enjoyable and worthwhile experience that we would recommend and definitely do again!