You can buy a cookbook and try to make the recipes at home, but Asian dishes are best learned when you have someone show you once. That’s what Daniel Tan, the owner of Food Playground, told us after we finished our cultural cooking class in Singapore.

His words rang true, especially after the hands-on class we were just in. We learned to cook roti jala (“net bread”), coconut vegetable curry, and hoon kueh (a coconut milk dessert). Without that hands-on experience, it would be difficult for us to replicate the recipes we just learned. For example, we wouldn’t know on our own when the curry paste is thoroughly fried (without undercooking or burning it!) or understand how to pour the roti jala batter so it’s interwoven properly. You have to use all your senses when you cook – and train them when you’re learning to cook. 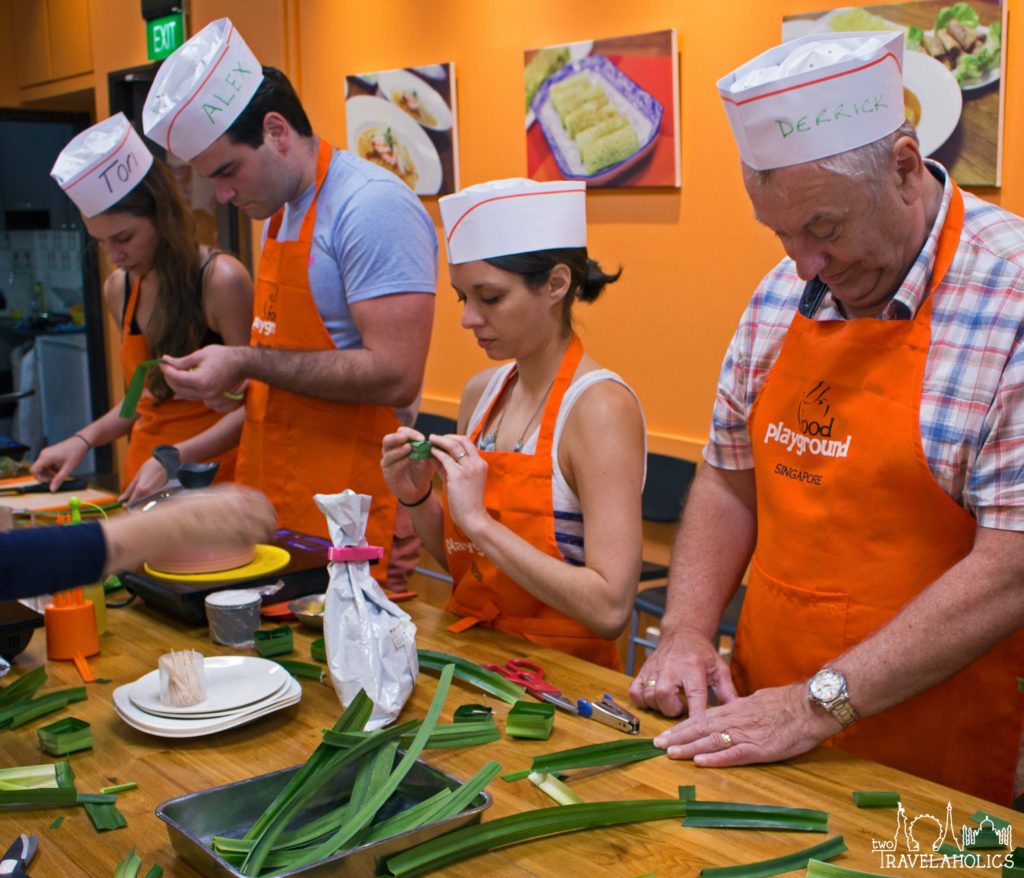 Our Peranakan cooking class at Food Playground was unlike any other we’ve taken. (Peranakans are descendants of Chinese immigrants who arrived in Malaysia and Singapore centuries ago and married locals.) Most cooking classes throw you straight into the recipe while sometimes teaching new techniques along the way (like smashing lemongrass with a pestle or your knife). However, at Food Playground, we didn’t jump into cooking right away. Our instructor, Helen Teo, started our class by showing us pictures of three popular Singapore dishes and asking all participants to identify them (Mike and I nailed them all!), before providing a brief history about them. 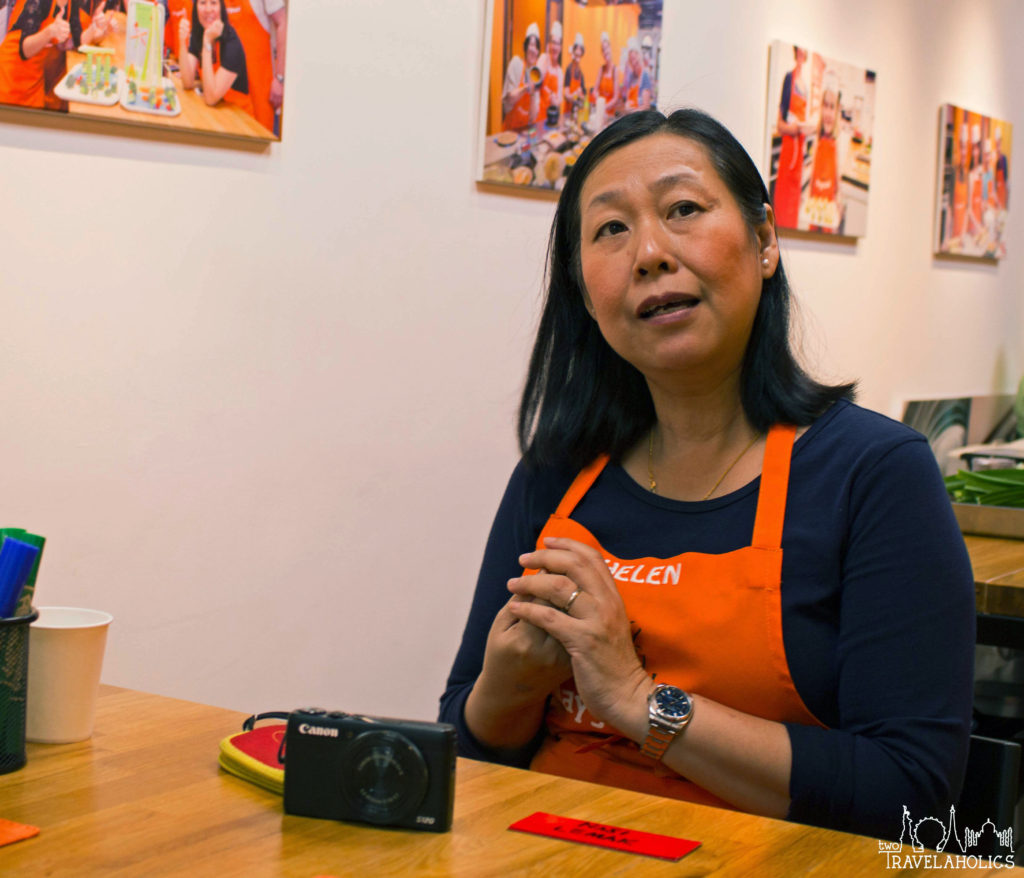 Our instructor, Helen, talking about the history of Singaporean cuisine.

For example, take the Singapore dish “carrot cake.” If you’re from a Western country, you are probably thinking about this sweet dessert. However, in Singapore and Malaysia, carrot cake is a savory fried dish. We had eaten it in 2013 in Melaka, Malaysia, but had no idea what was in it (like a lot of things we’ve eaten in foreign countries). Helen explained that the Chinese brought a version of this dish when they first arrived in Singapore long ago. In short, you grate a daikon radish, which they called a white carrot, and mix it with flour, salt and water. Then you put the batter in a mold and steam it. This gives it a cakey texture. They fry that up with garlic, egg and other seasonings to make the dish known as carrot cake. (If you’re wondering why it’s not called a “white carrot cake,” it’s because the original translation left off the word “white.”) Additionally, there is a white and black version. The difference is that the latter uses sweet soy sauce while the white doesn’t. Makes sense now, right?

After our cultural lesson on a couple other popular Singaporean dishes, we went to work on making hoon kueh, our dessert. Since it needed time to set in the fridge, we had to get that started first. Helen showed us how to make little crates out of pandan leaves to use as a mold for our hoon kueh mixture. Once we made a few crates each, we got to work on the recipe. It’s a coconut milk-reduction dish with corn kernels. Helen explained that it’s traditionally made with a particular sweet banana, but now that fruit is too expensive to use. Banana seems like a natural ingredient for dessert, so we weren’t sure what to expect with the corn, but it the flavors compliment each other really well. 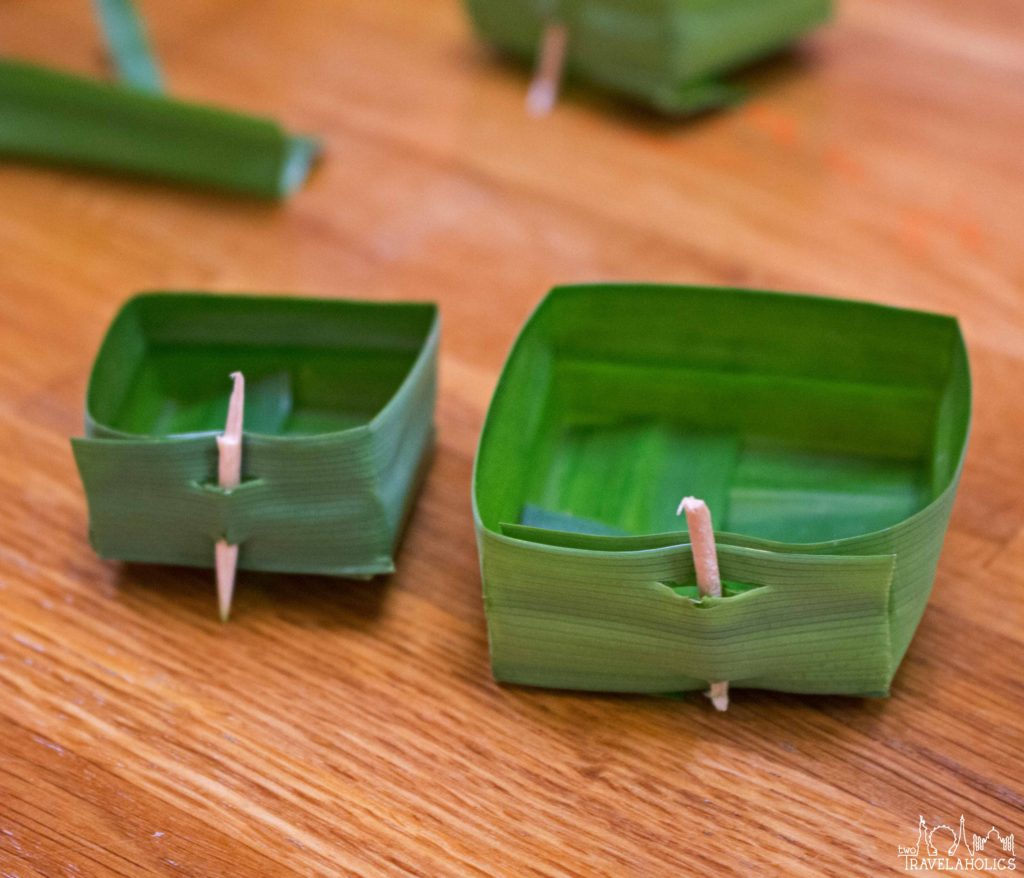 Little crates, or molds, made from pandan leaves for our dessert. 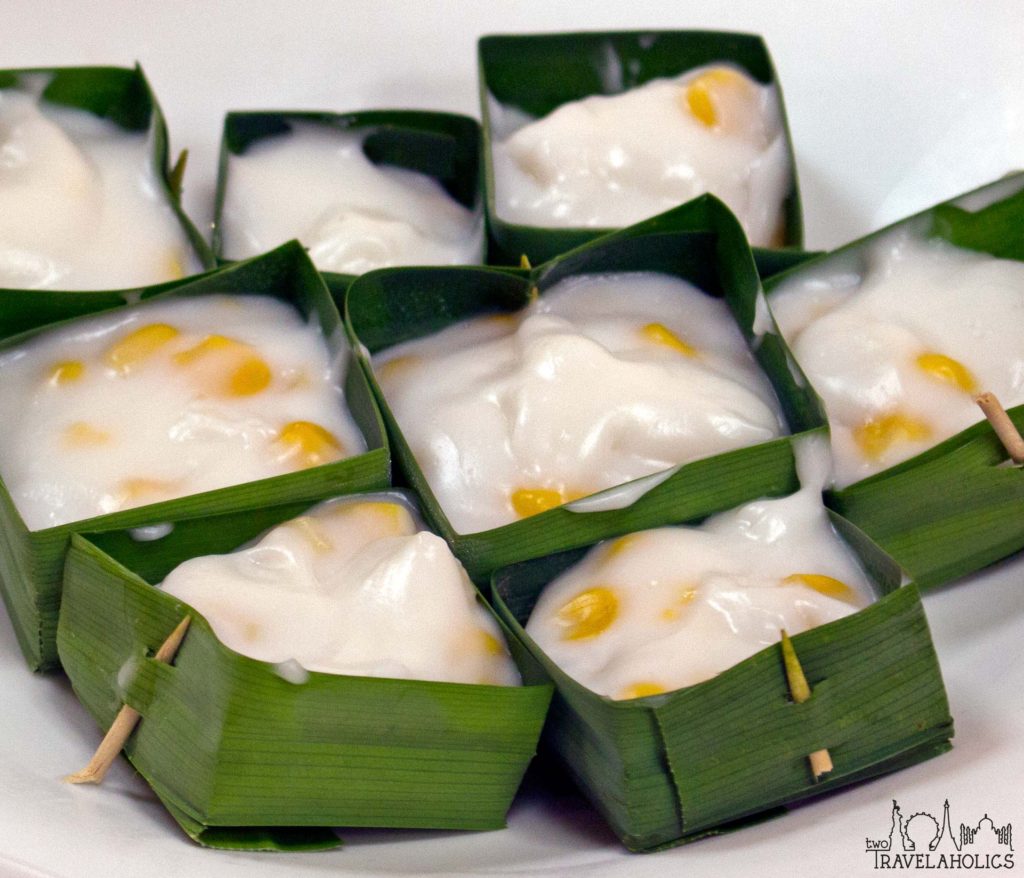 When we finished making our dessert, an older woman who Helen called “Auntie” took the pandan crates to the fridge for us (she was SO adorable!). Helen explained that although the other woman and her aren’t related, the colloquially used term in Singapore for an older woman is Auntie and for older men is Uncle. So Auntie was our helper, bringing us ingredients and removing things we were finished using. The cool thing we learned about Food Playground is that they have a specific hiring strategy. As Daniel put it, they seek to “create meaningful and dignified employment opportunities for active seniors and stay-at-home mothers by hiring them as cooking instructors and helpers.” Food Playground works with their stay-at-home mothers’ schedules so they’re home in time to be with their kids after school, and the older “helpers” have a way of earning money that doesn’t tire them out or force them to the streets (many pensioners try to make money by selling tissues at hawker centers). We love Food Playground’s mission, and can’t think of another organization that does this.

Next up, we learned to make roti jala, the lacey net bread. We would’ve really messed this up if we had only tried to make it at home without Helen’s help. After creating an egg-based batter, you need a nonstick skillet and a particular tool to pour the batter onto the skillet. It’s kind of like a cylinder with holes in the bottom. Helen said that before this tool was created, women used to hold the batter in their hands and let it drip out through their fingers. Then they progressed to punching holes in the bottom of condensed milk cans. Today, those who make the dish use the tool we used in class. Luckily, the folks Food Playground realize how difficult it is to find one of these tools, so they gave us one to take home! After putting the batter inside the dispenser, you make circular motions with it over the pan. You have to hold it low, and you have to be quick, and you have to make the circles just right so the lines are thin and there aren’t big globs of batter anywhere. You can see why the hands-on aspect of learning to make these dishes is so important. 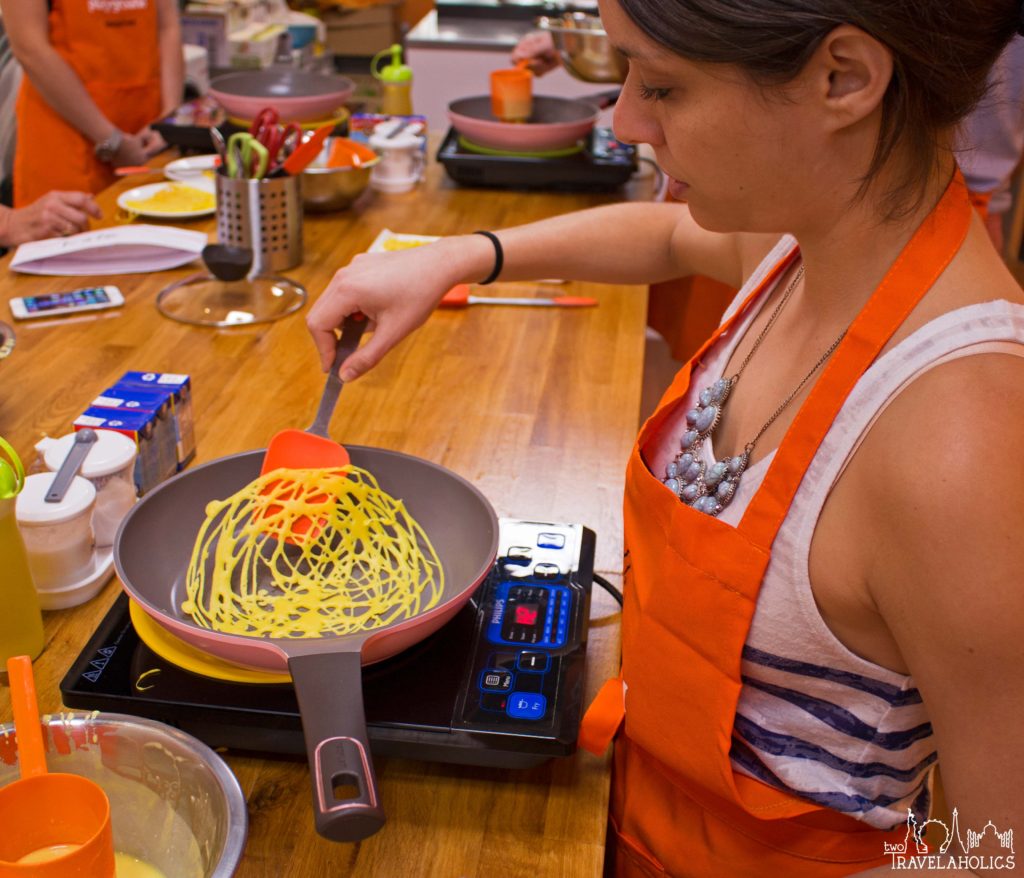 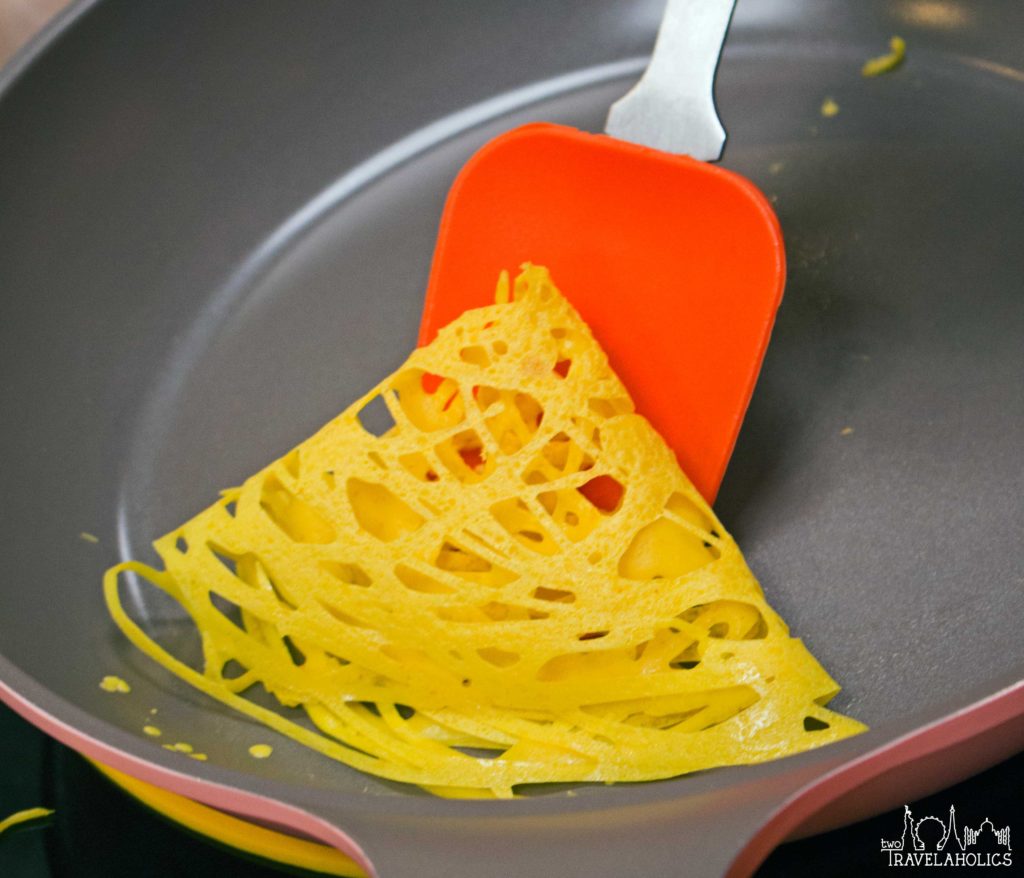 Then we moved on to our last dish: coconut chicken curry. Since we don’t eat chicken, they were able to accommodate us and provided vegetables like pumpkin, potato and okra instead. The first step was to make the curry paste. Mike offered to be the mortar and pestle master while I diced up the larger curry paste ingredients for him (like shallots, lemongrass, garlic – you get the idea). Helen told us that when she was younger, her grandmother would make her pound curry paste before she could go out and play. “That was the sixties,” she said nostalgically. Of course, she hated doing it as a kid, but it’s a cultural tradition that she has since passed on to her children.

We then had to learn how to fry the curry paste until it was thoroughly cooked but not burned. That was not an easy task for anyone in our class, even as Helen gave us pointers along the way. Then you add in your chicken (or veggies) and then coconut milk to complete the dish. 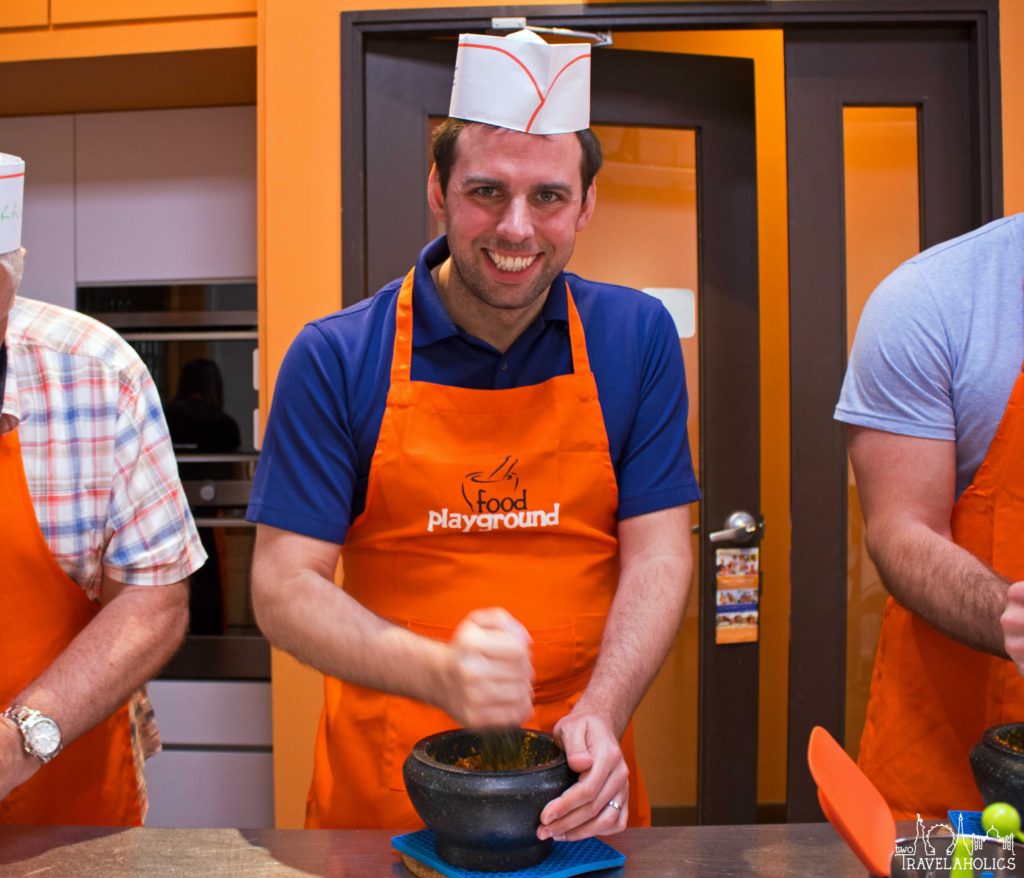 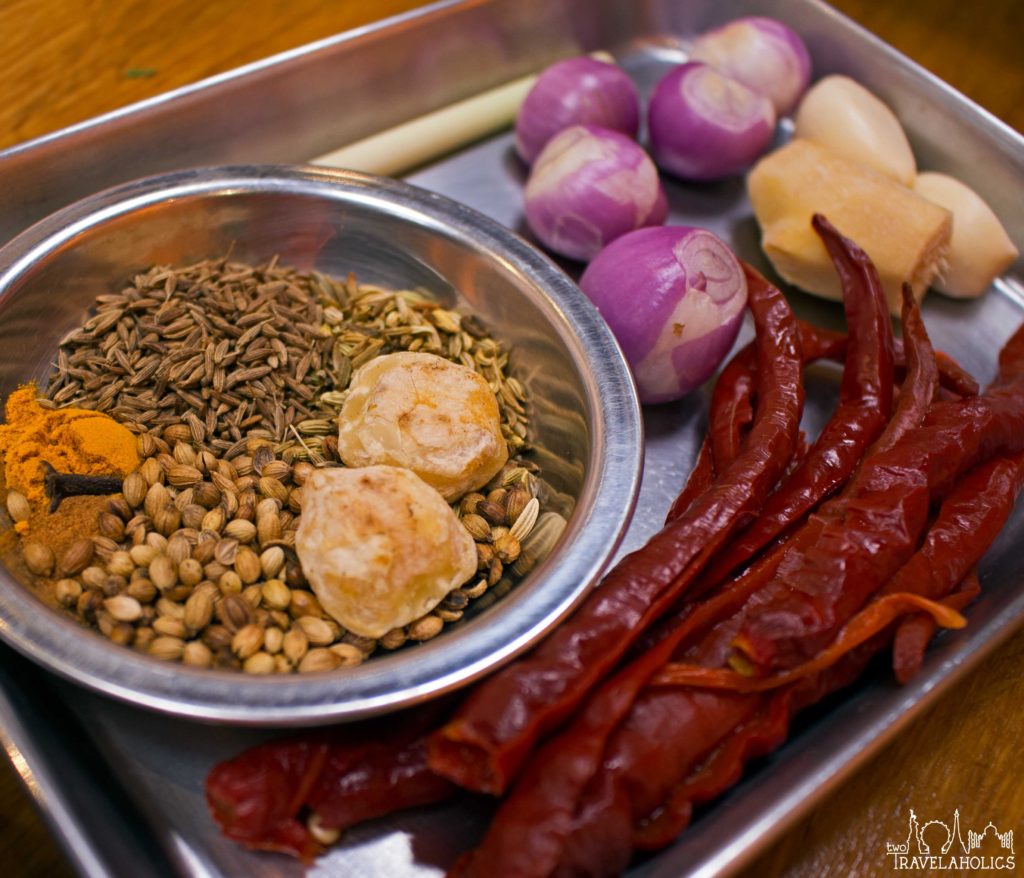 It was such a fun class, and we have already planned to recreate the dishes. In fact, we’re going to try our hand at making the hoon kueh for a friend’s upcoming housewarming party. It isn’t easy to find pandan leaves in the U.S. (to make the crates or add its unique flavor to the dessert), but we did find a pandan plant on Amazon and powdered pandan in Thailand that we brought back with us. Until our new plant grows larger, we’re going to use mini cupcake liners and our powdered pandan (hopefully our new plant will grow quickly so we can use it soon!). 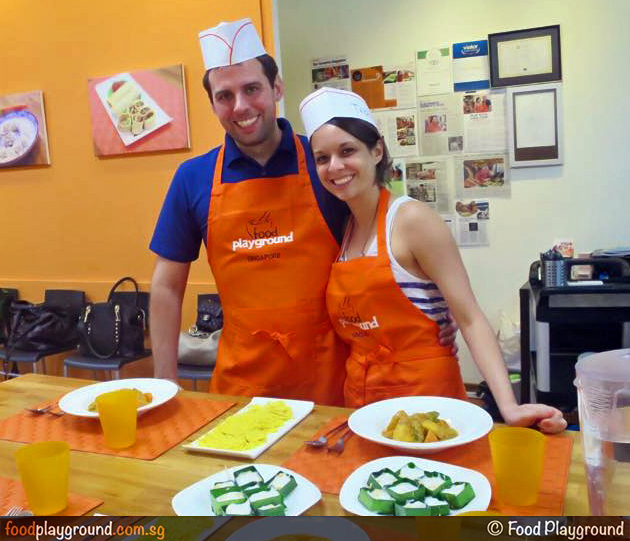 Us with our final creations at Food Playground. Picture taken by Helen.

We used to own a mortar and pestle before we sold all of our possessions to take our RTW trip, so we’re now scoping out which one we want to buy so we can start making our own curry paste. It takes some physical effort to make, but it’s actually really easy once you get the hang of it. We’re eager to not only try the coconut curry dish that we learned, but to also get creative and substitute curry paste ingredients to cook up something new.

I’m convinced that cooking is an art. Like painting or writing, you start with a blank canvas. The ingredients you choose are the colors or words, and the way you blend them together will make your final work of art. For me, cooking is also a stress reliever. Most people want to come home from work and crash on the couch, but I enjoy cooking because it clears my mind. And now after having taken this class, I’ve learned new techniques and ingredient combinations to create new edible art. I’m excited to see where I can take it. 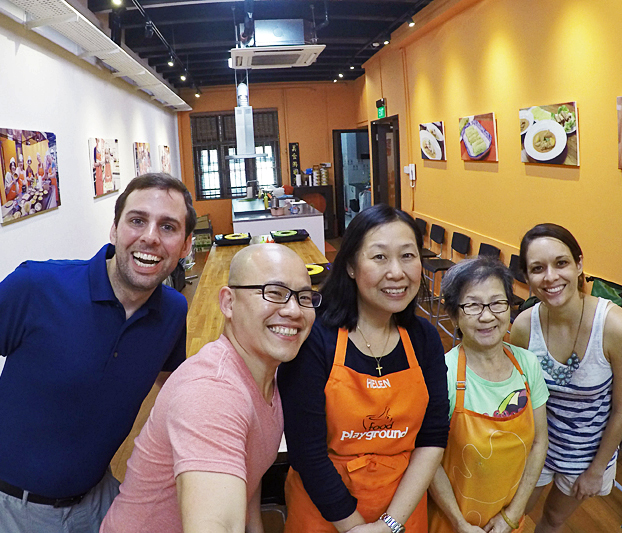 Disclosure: We received a class discount from Food Playground in exchange for sharing our experience. As always, all thoughts and opinions are entirely our own. The class was truly an enjoyable and worthwhile experience that we would recommend and definitely do again!