We were buzzing before noon. Alcohol wasn’t on the itinerary until at least 2pm, but here we were, drinking with Cambodians from the mainland. They came to Rabbit Island the same way we did — via boat — but a few hours after we arrived. During those prior hours, we viewed a few bungalows — and decided to take a $5 “luxury suite” — swam, read and took a snooze on hammocks. Right before we planned to have lunch, three generations of men approached us with beers in hand. Tara was reading in a hammock and Mike had just sat down next to her. The men smiled and thrust two beers toward us. We have learned many things during our travels, and one is to never turn down having a drink with the locals. 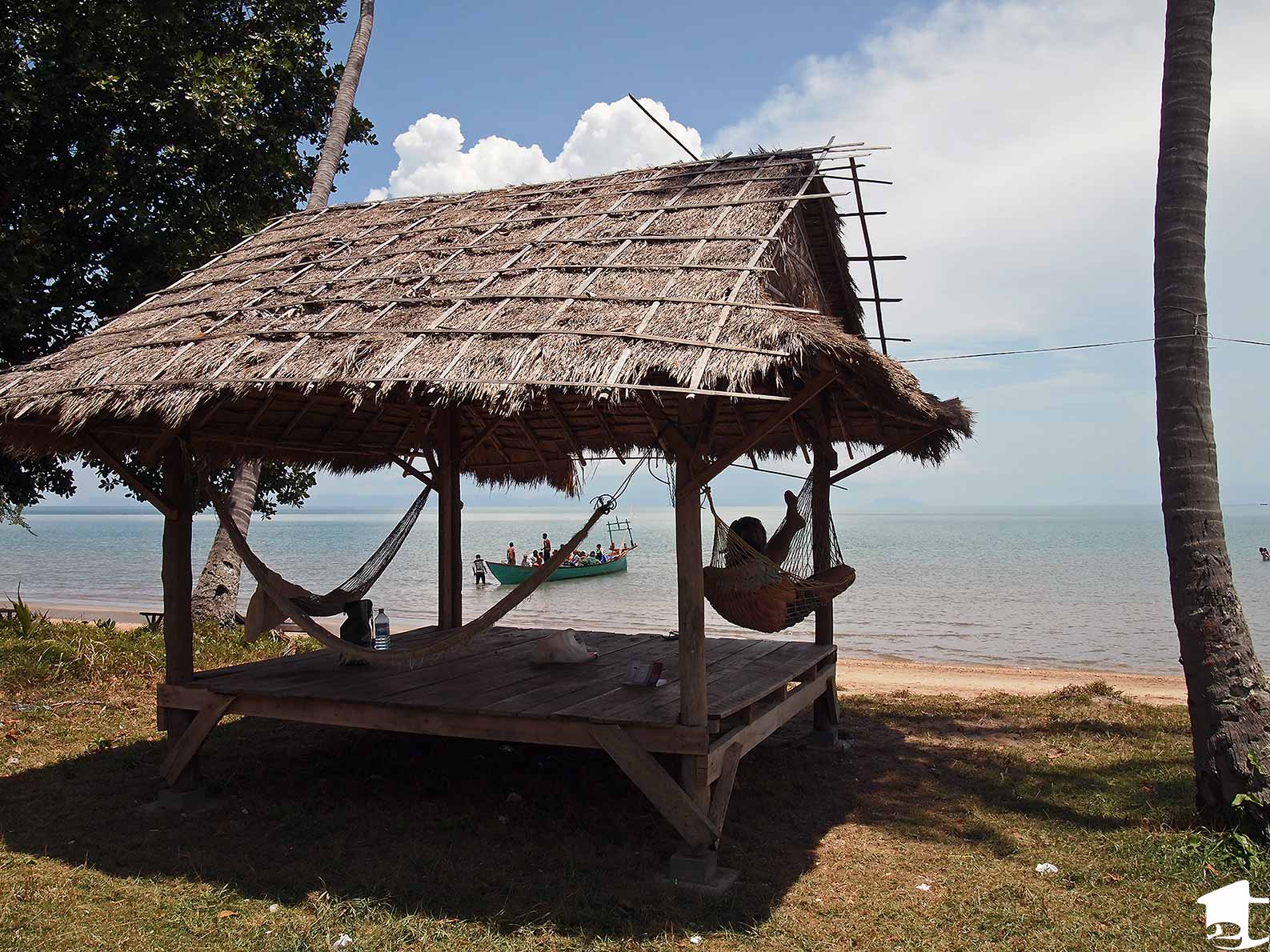 Mike was lounging in a hammock when the locals arrived. Little did we know at the time of this photo that we’d all soon be very close!

The men represented three different generations of Cambodians, a man in his twenties, his father in his fifties, and an older uncle in his sixties. They spoke nothing but Khmer to us, thinking that, for some unknown reason, we could speak or understand Khmer. Everyone sat crossed-legged and demanded that we sit the same way. We were quite surprised to encounter an old man since the Khmer Rouge committed genocide to about 2 million people in the 1970s. He and Tara drank at the same pace (slow), which the second-generation man didn’t like much. Comparatively, the two “younger” men guzzled beer like college frat boys. We hadn’t eaten since earlier that morning and didn’t think that keeping pace was the best idea, but we were forced into it.

“La-weh!” the middle-aged man would say, extending his right arm, beer in hand, with his left hand touching his right shoulder. Cheers! We couldn’t not cheers back.

After a la-weh, one must chug their beer, not sip it. And so began a cheers-and-drinking extravaganza for the next two hours. They refilled our beers before they were empty, lifting them occasionally to see how we were coming along. Mostly, if we (read: Tara) weren’t drinking fast enough, the middle-aged man would use charades to show us (her) that we (she) should be drinking faster. He chugged his beer, flipped the can over to show nothing dripping out, crushed it in his hand, and threw it on the ground. [Insert college party flashback here.] 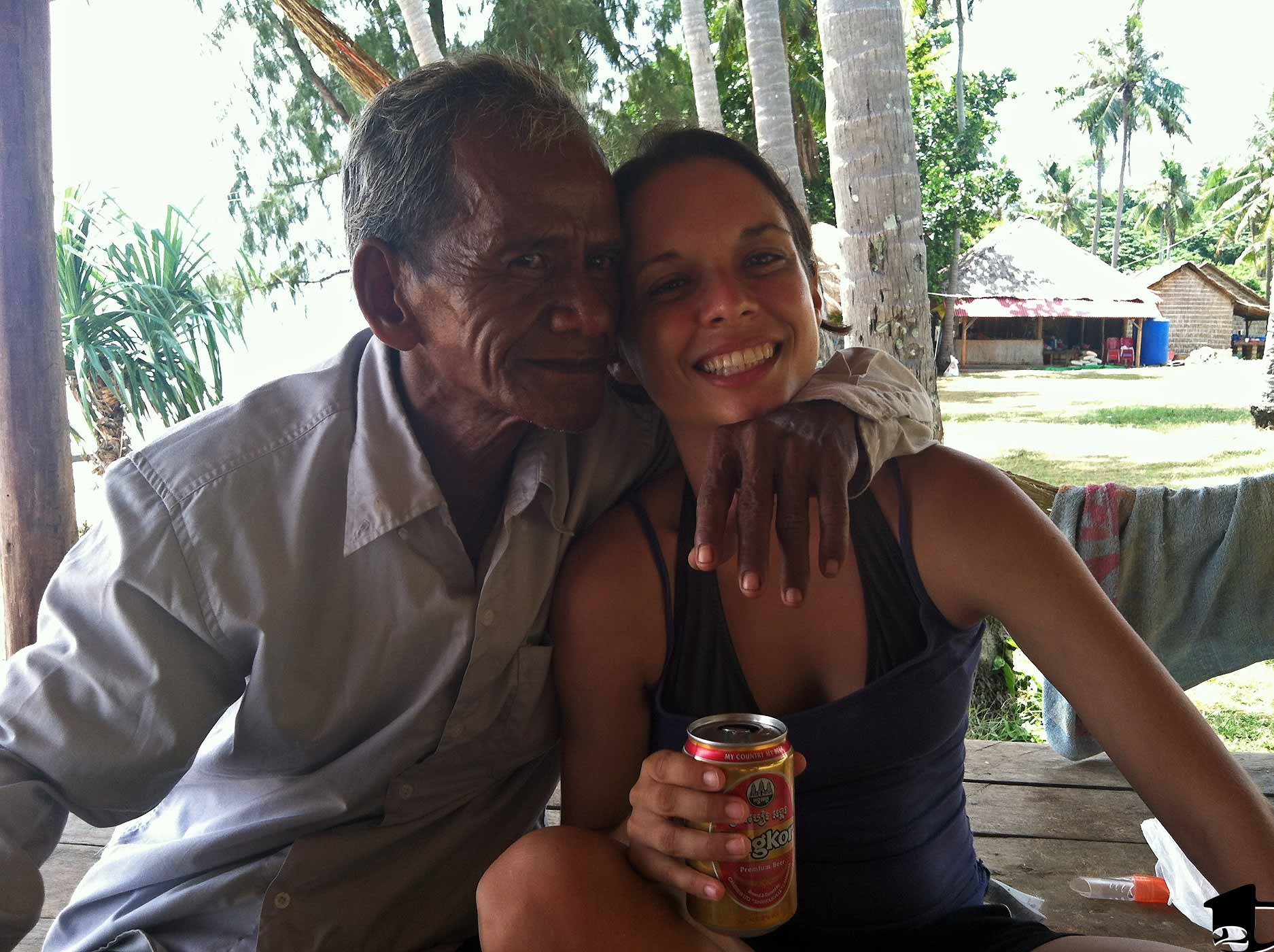 Tara and her new drinking buddy.

They even brought over a bit of food to share. But this small mound of shrimp and chicken was not going to absorb all the alcohol they just consumed. It didn’t help us much but at least we didn’t get sick later.

Soon, the middle-aged man’s daughter, Poon, came over. She was a savior because she could speak a little English. Poon was our translator for quite a while. She explained that one of her five brothers had gotten married the previous day and the whole family was celebrating on the island for the afternoon. Everyone was in good spirits.

Despite our great CouchSurfing experiences, we weren’t used to this type of generosity and open friendliness. Why weren’t they celebrating with the bride and groom? Turns out Muu, the youngest of the three men, and brother of the groom, wanted an English-speaking friend. So we spoke exclusively in English to him, while trying to pick up what Khmer we could. 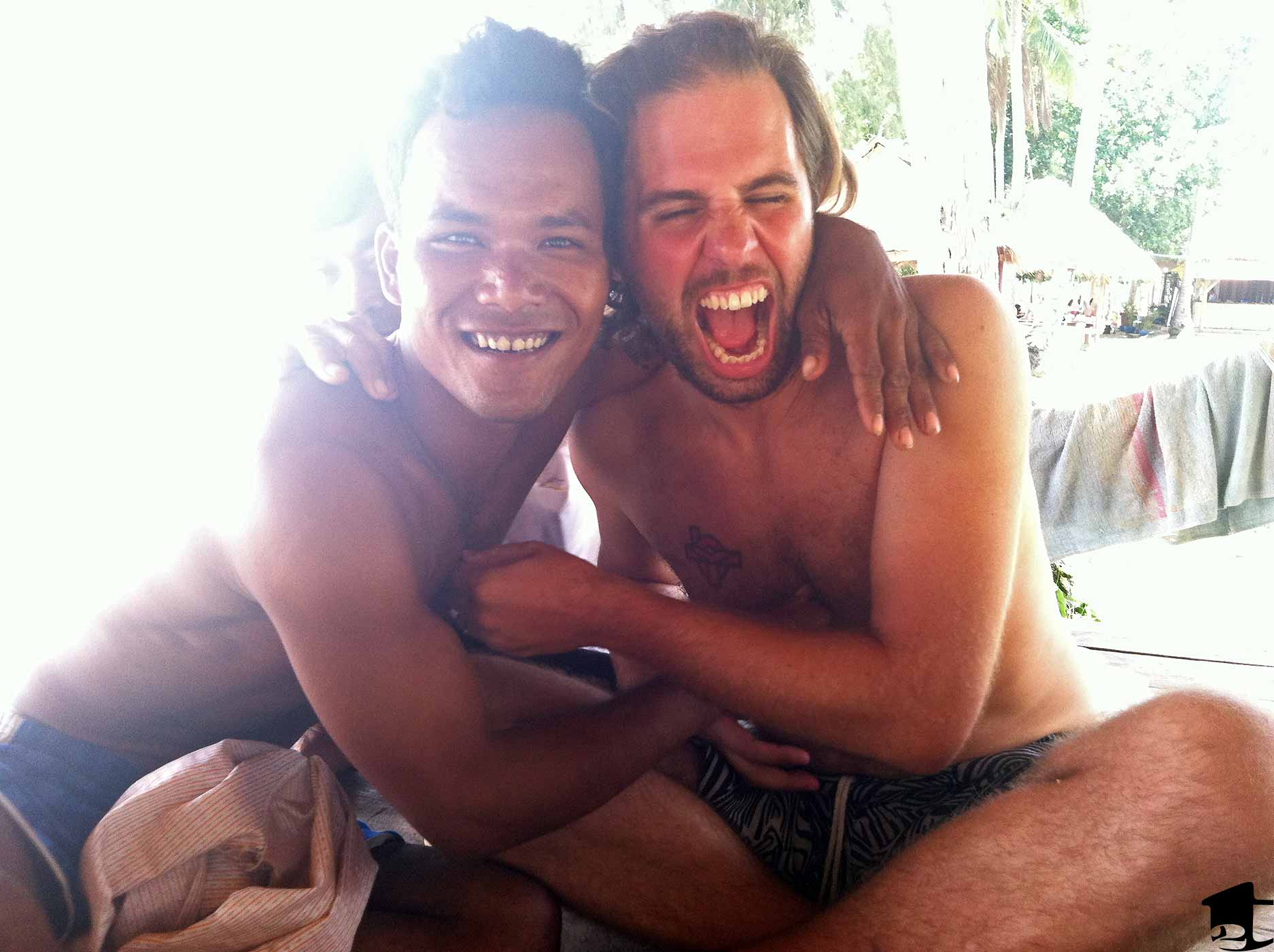 All in all, it was a very interesting experience. We came to Rabbit Island because it’s known to be peaceful and a little less traveled by tourists. Little did we know that locals visit for a brief getaway from the [still very sleepy] mainland cities.

A few hours later, the whole family boarded their boat bound for the mainland. Many other daytime visitors were departing Rabbit Island as well, leaving the small stretch of inhabited beach with a handful of foreigners saying the night and those who run the guesthouses.

This was a good find, we reflected. A Koh Lipe or Perhentian Kecil 20 years ago. A place where the locals still come for the day and few tourists care to venture. After all, only nine people, including ourselves, were on the morning ferry over, and the few dozen bungalows along the beach were nearly empty during our three-day, two-night stay.

It was nice to find a serene island that has yet to be built up and added to tour itineraries. Now we understand why people who visited the Thai islands 30+ years ago wished for them to remain undiscovered. We can see ourselves easily falling into that kind of nostalgia, “We went to Rabbit Island when…”

Getting there
Ferry from Kep jetty. Roundtrip tickets from your guesthouse cost $10 USD for the early morning ferry and include a transfer to the jetty. You can return later the same day ($7/round trip) or stay overnight and choose your departure time on whichever day you return.

Accommodations
Small bungalows, ranging from $4-10. The cheapest is without an indoor toilet and shower. $5-6 buys a double bed with mosquito netting, attached bathroom, and a patio with one or two hammocks. We didn’t find much different in the $10 bungalows except that they were built more recently and have wooden walls versus thatched walls. 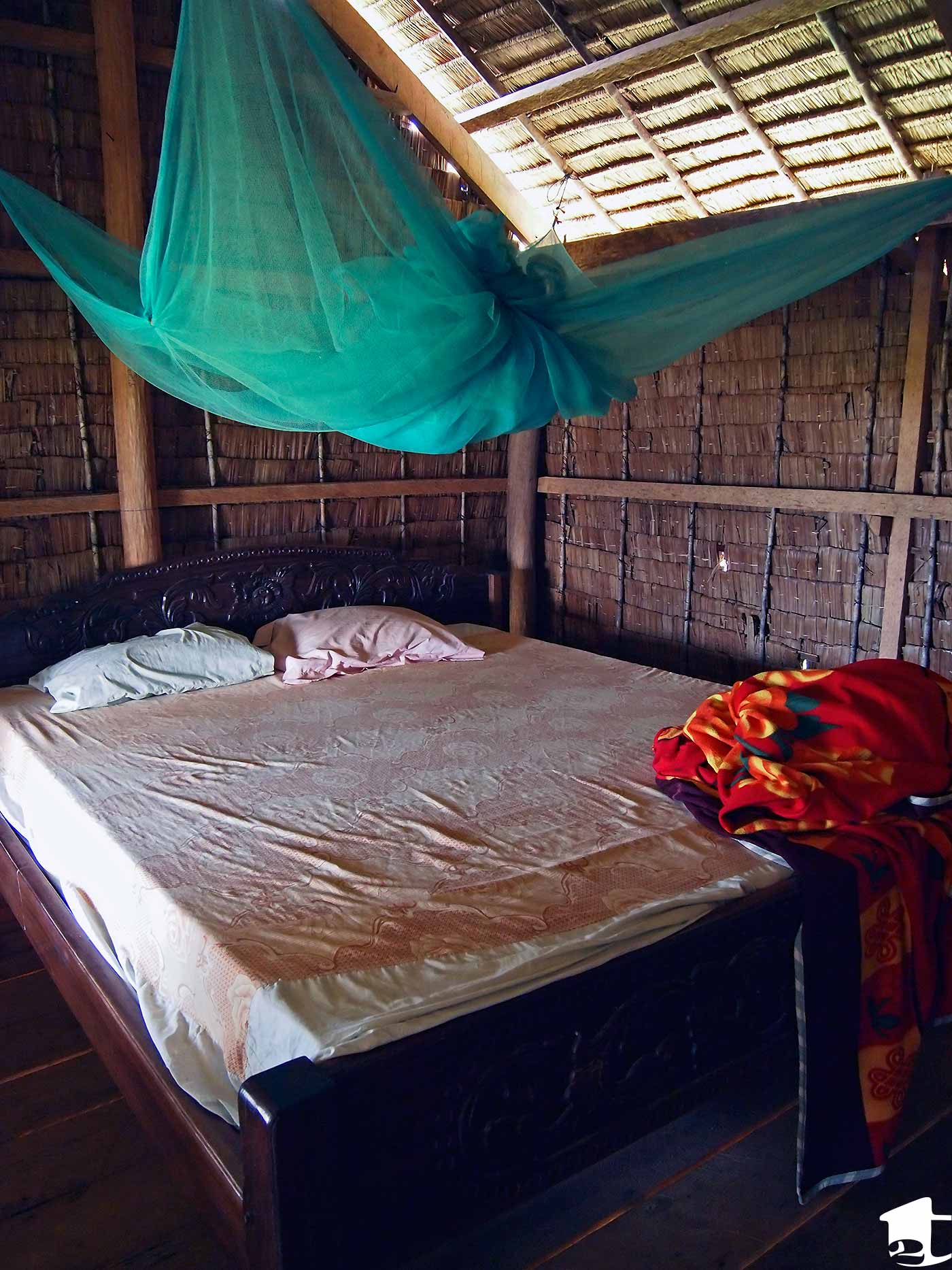 The inside of our bungalow at Yeay Meng Guesthouse.

Restaurants
The seafood is so fresh that you can pick your own crabs out of the crab cage near shore. Small plates of seafood are $4, and large plates are $5. Fruit shakes are $2. Iced coffee is $0.50. Beer is $0.75. Mixed drinks are $2. Breakfast dishes are $2-3. Yeay Meng cooks excellent food (mid-way down the beach).

Other
Generators run from about 8pm until 10-10:30pm. Therefore, don’t expect a fan or AC room. It’s pleasant though and can get cooler at night depending if it rains.

There are no ATMs or convenience stores, but you can buy food and drinks at the restaurants outside each set of bungalows.

Bring your own toilet paper, but never throw it in the toilet (always in the garbage).

There are massage huts sprinkled along the beach. The girls are small but powerful. Highly recommended! A Khmer massage is $5, oil massage $7 and aloe vera massage $9.