As the Zanzibar police officer waved for us to pull our scooter over, I could feel Tara’s grip on my waist get tighter. I breathed out gently, “I have nothing to worry about,” I reassured myself, but we were about to find out that nothing was as it seemed.

Police roadblocks in Africa are common, so as we came around a corner to confront two officers motioning vehicles to stop, I was not surprised. Only hours earlier, I had jumped through numerous hoops in order to drive away from Stone Town, Zanzibar with a Vespa, so I felt comfortable that we would have no problems with the police. 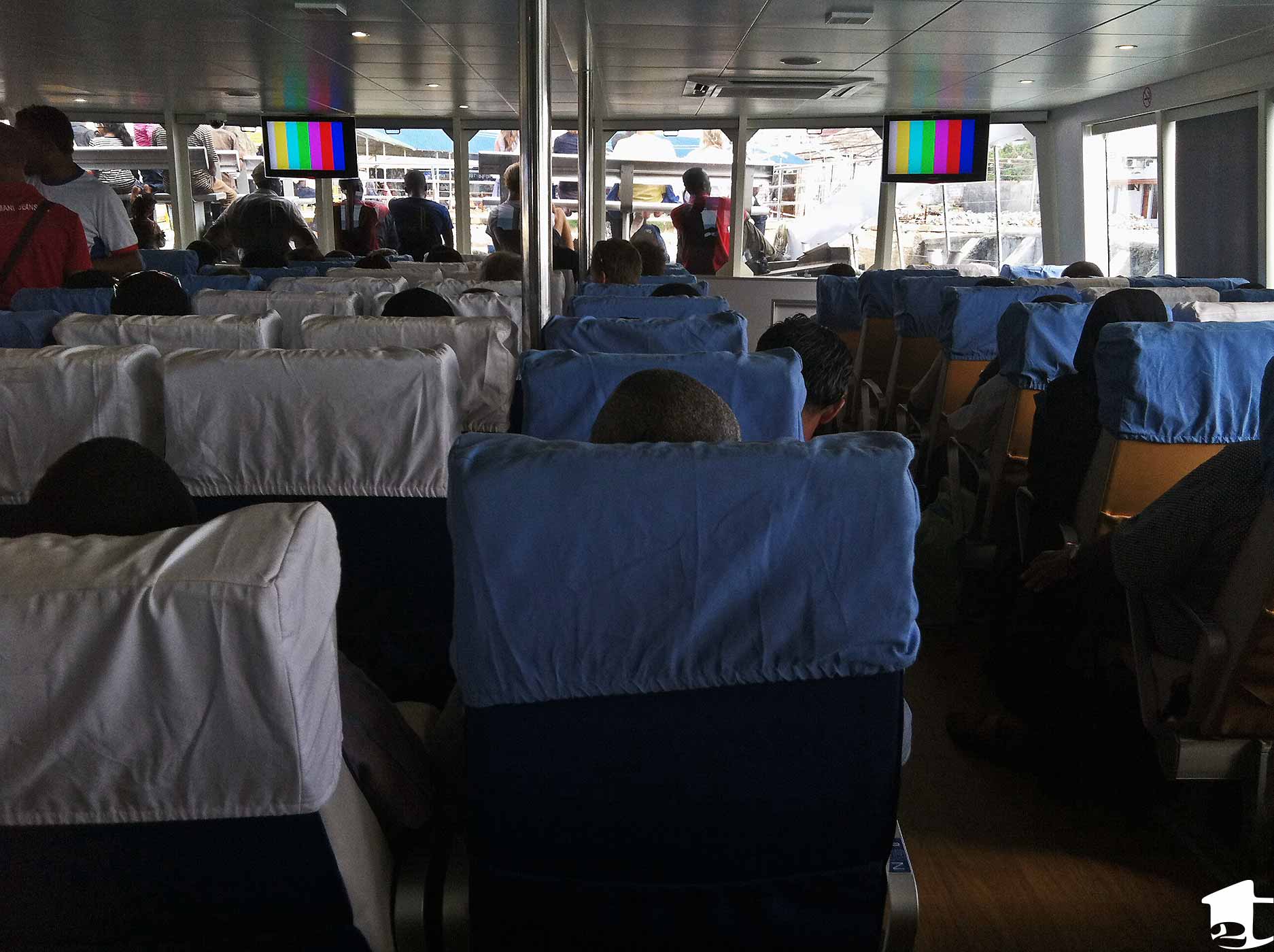 Inside the ferry to Zanzibar.

These hoops began upon arriving at Zanzibar’s port. We were introduced to Fazel (Africa Travel Company’s Zanzibar logistical contact), who told us that someone else would be bringing our scooter and working out the details of the rental. About 10 minutes later, a middle-aged, light-skinned Indian wearing a baseball cap and sunglasses, called Ally Keyes, arrived. Immediately, he started going over the prices for the rental, “Do you want a dirtbike?” “How long do you need it for?” “Where will you drop it off at?” Although the price of a dirtbike was the same as a Vespa, I figured a scooter would be more comfortable for the long drives we expected to make over the next few days.

Ultimately, we paid about $80USD for gas, a Tanzania driving permit, the 48-hour rental and scooter pickup. I found it strange that I was required to purchase a local driving permit, but after conferring with our ATC guide, he said it was necessary; police might want to see it. While I had a U.S. driver’s license and an international driver’s license, this was simply a confirmation permit ensuring my documents are valid. The paper I was given looked official, with stamps and a signature attesting I was fit to drive a scooter.

Now that I paid the balance, Ally grabbed me and showed off the Vespa. It was a flashy red model that looked fairly new (probably made in the early 1990s) and spacious enough for two people plus a backpack. Ally asked me to hop on the back and we quickly took off, zigzagging through the narrow streets of Stonetown and ending in a grassy field. Here I was expected to show that I was capable of driving.

Full disclosure, I hate bicycles and motorcycles. I hate them. I never feel in control, and worse, I always seem to wipeout. Yet, I figured a Vespa would be different. I had seen enough people buzzing around on them to think, “If they can do it, I can, too.” Well, read on. 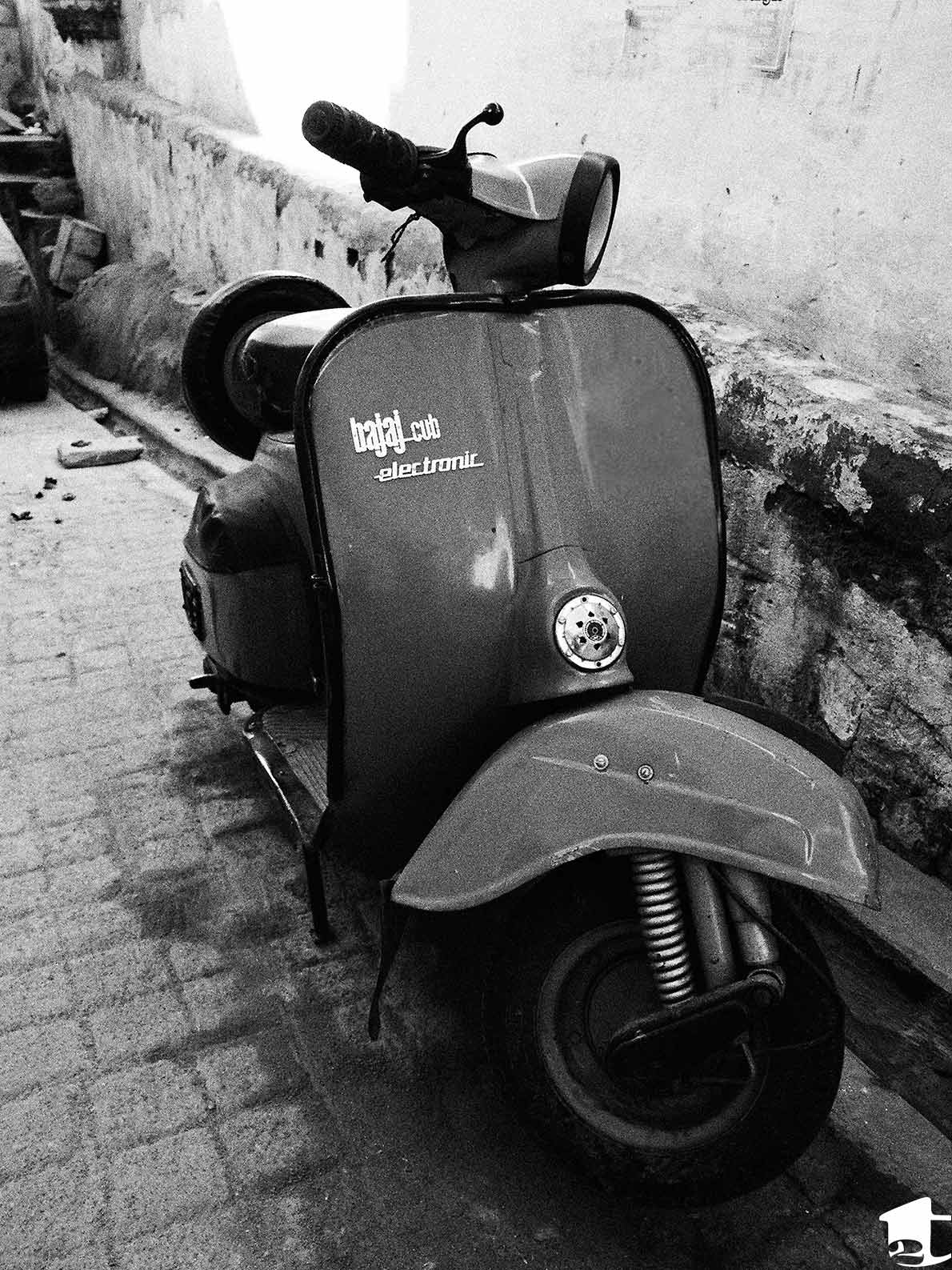 This isn’t a picture of our exact scooter, but it looked like this one.

Upon arriving at the field, Ally went through the basics of the scooter before it promptly ran out of gas. There was some hemming and hawing and I was offered a chance to rent a truck, then a dirtbike, before finally another scooter was summoned. This next Vespa was old, but had the look of a sturdy vehicle. Unfortunately, due to its age, instead of shifting gears with your feet, you shift by twisting the left handlebar. So, for those who know about manual transmissions, the clutch was on the left, the gears were on the left, and the gas and front brake was controlled by my right hand. Also, there was a footbrake that controlled the rear brake.

Highlights of the bike included no working fuel gauge, no storage space, and a finicky clutch. I was thrilled I had a chance to practice on the field before going back to the narrow alleyways where Tara was waiting for me. Before Ally waved goodbye, he handed me a card with the rental company’s information. The tiny picture in the corner of the card looked like him and he said to call his cell number listed on the card that if I had any problems.

When I met back up with Tara, we agreed to go to our beach accommodations (approximately 60 kilometers) to drop off our bags, relax and then venture out for more driving around the island. As soon as Tara got on, I could tell by her body language that she was uncomfortable with the situation; the large vehicles, the sandy road and even the strain of riding behind me with a heavy bag on her back were red flags as to the practicality of things. But with Stone Town in our rearview mirror and the excitement of exploring the island on our own, we continued to drive north.

It can be slightly nerve-wracking to drive in a country where the traffic flows on the opposite side of the street (left in Tanzania versus right side in the United States). But somehow riding a scooter helped dull the fear a little since I was not driving in the middle of the road.

After 40 minutes, the number of vehicles sharing the road dwindled, but the quality of the pavement also began to deteriorate. It became sandier and more potholes appeared. Most disturbingly, there were no signs (neither traffic signs for speed, direction, etc., nor for businesses, like our hotel). We had a map but no idea exactly how far we were from our destination – just the knowledge that it should be an hour’s drive by bus. Thankfully, after stopping now and again and asking locals for updates on our location, we were able to figure out our approximate route.

Zanzibar’s roads are twisty and have numerous speed bumps to slow drivers. Even throwing the scooter into second gear and braking to slowly climb over them left our stomachs in our throats. Still, the ride was exhilarating and a spectacular way to see the island. We were enjoying ourselves and had slowed to go around a corner when, as we reached the straightaway, we saw a police roadblock. 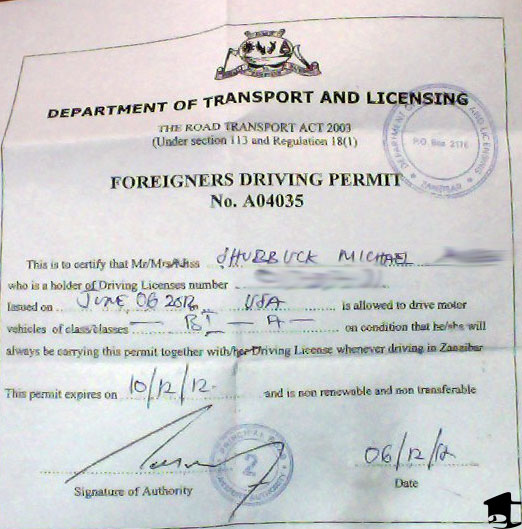 About 20 meters away, two police officers waved us to pull over and I willingly complied. Stopping next to one of them, I smiled and asked how he was doing. He responded by saying good, and then asked for my driver’s license. I got out my international driver’s license and my Zanzibar permit. That is when everything started to go south.

“This is fake,” the police officer casually said. As he pulled out a paper that looked nearly identical, he announced, “This is real, you see. Yours is a copy. Not real.” I examined the two side-by-side. While my paper had all the appearances of a real one, you could tell from the stamps that it was just a color photocopy.

“Do you know what bond is?” the officer asked with a smile.

“You were driving erratically and also without a valid license. I can take you to jail. Or, we can settle this here, my friend.”

Both Tara and I looked at each other with a gaze that said it all: this is a shakedown. But I knew if I had to open my wallet, it probably would not close until all our money was gone. So I told the cop, “I have no money.”

His eyebrows furrowed. I could see he was determined to get some money from me, no matter what. “No,” he said. “My friend, we settle this now.”

Sticking to my guns, I kept repeating that I had no money. The two policemen were not getting the message. Finally, I got out Ally Keys’ card and told them to call Ally. “He just took the remainder of my shillings,” I told them. This is where the story gets even more insane: Ally answered and acted as if I never rented the scooter from him, as if we had never met. Instead, he told me to bribe the police with 5,000 shillings. But I knew that if I pulled out money after 20 minutes of repeating that I had none, the bribe price would probably triple.

So the stare-off continued. More pleads of “My friend, my friend” were tossed my way. Tara and I began to weigh other options, but none of them seemed feasible. Finally, one of police officers threw up his arms and told us we could leave. 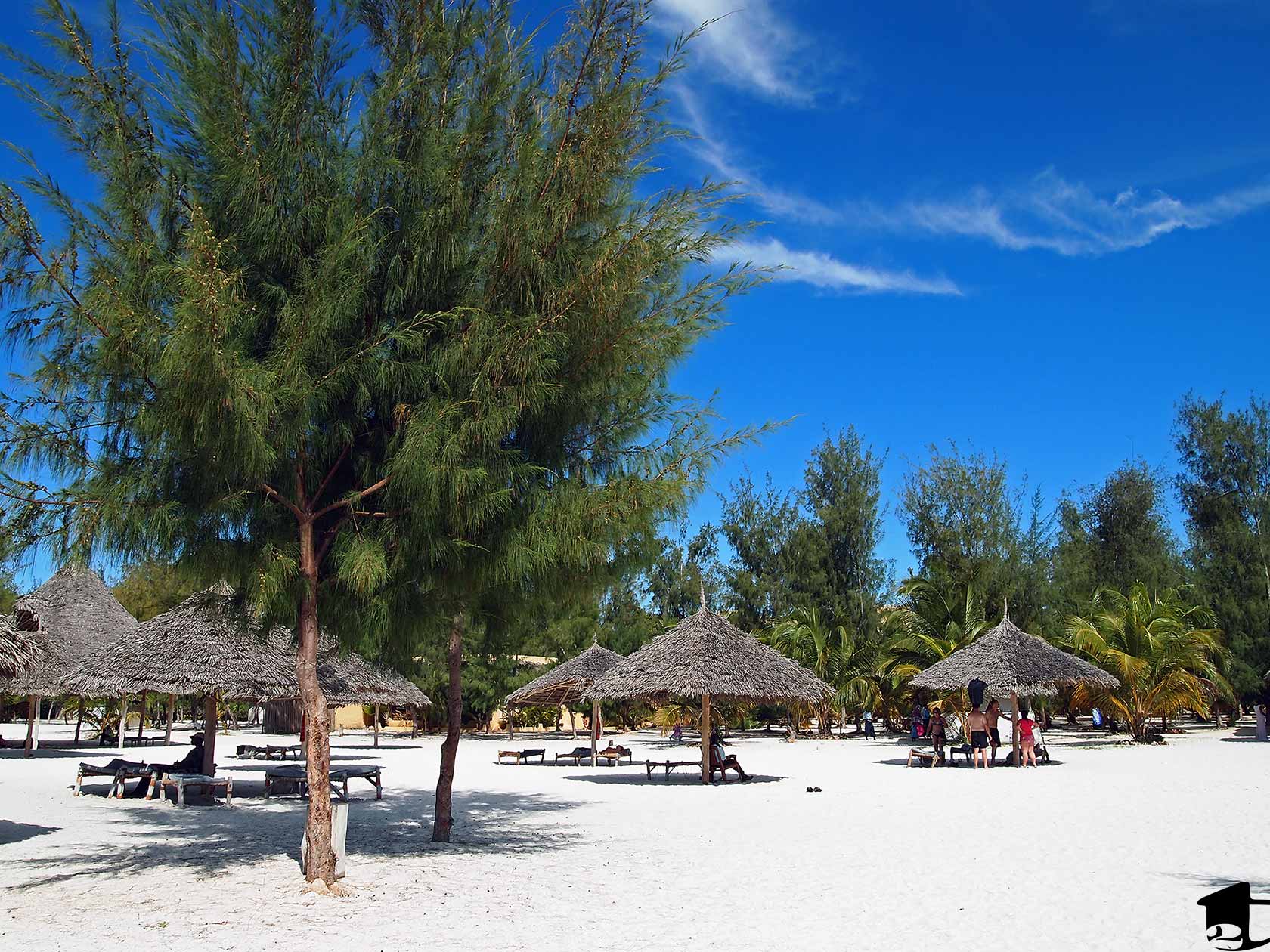 The beach we finally arrived at after three hours on the road.

The whole experience had left my head swirling and by the time I jumped on the Vespa, I halfheartedly waved thanks, peeled out, stalled out, then tore out down the road away from them.

Afraid we would deal with more cops who would say our permit was fraudulent, we decided to try to obtain a refund for our rental. We called the number from the card and discovered that the guy who rented the scooter was actually not Ally Keys, but his son. Instead of relaxing on the beach, we spent two days trying to figure out who was lying and who we could trust. It truly was a nightmare. Even our ATC guide tried acting as an intermediary for us, but became bogged down with how we could get refunded. Ultimately, Tara and I recovered some of the money and were able to walk away with a crazy story. But since we weren’t able to drive around the island, we’ve had to re-add Zanzibar to our travel list so we can properly explore it on another trip.