I feel different in Africa. Inside I smile constantly, discreetly like I haven’t gotten over the feeling of being excited about a moment. It’s the happiness you feel in your stomach that radiates upward and nearly forces a smile across your face. But I keep it trapped inside because it feels more tangible that way.

Vast fields of rocks and sun-dried plants cover the distance between us and mountains that rise out of nowhere. Like seeing a city’s cluster of smog-drenched skyscrapers from the distant suburbs. But instead of tar and streetlights leading the way, beige gravel roads snake through the desert with more regard for the oryxes and springbok that graze than the 4x4s that vibrate furiously as they speed along. 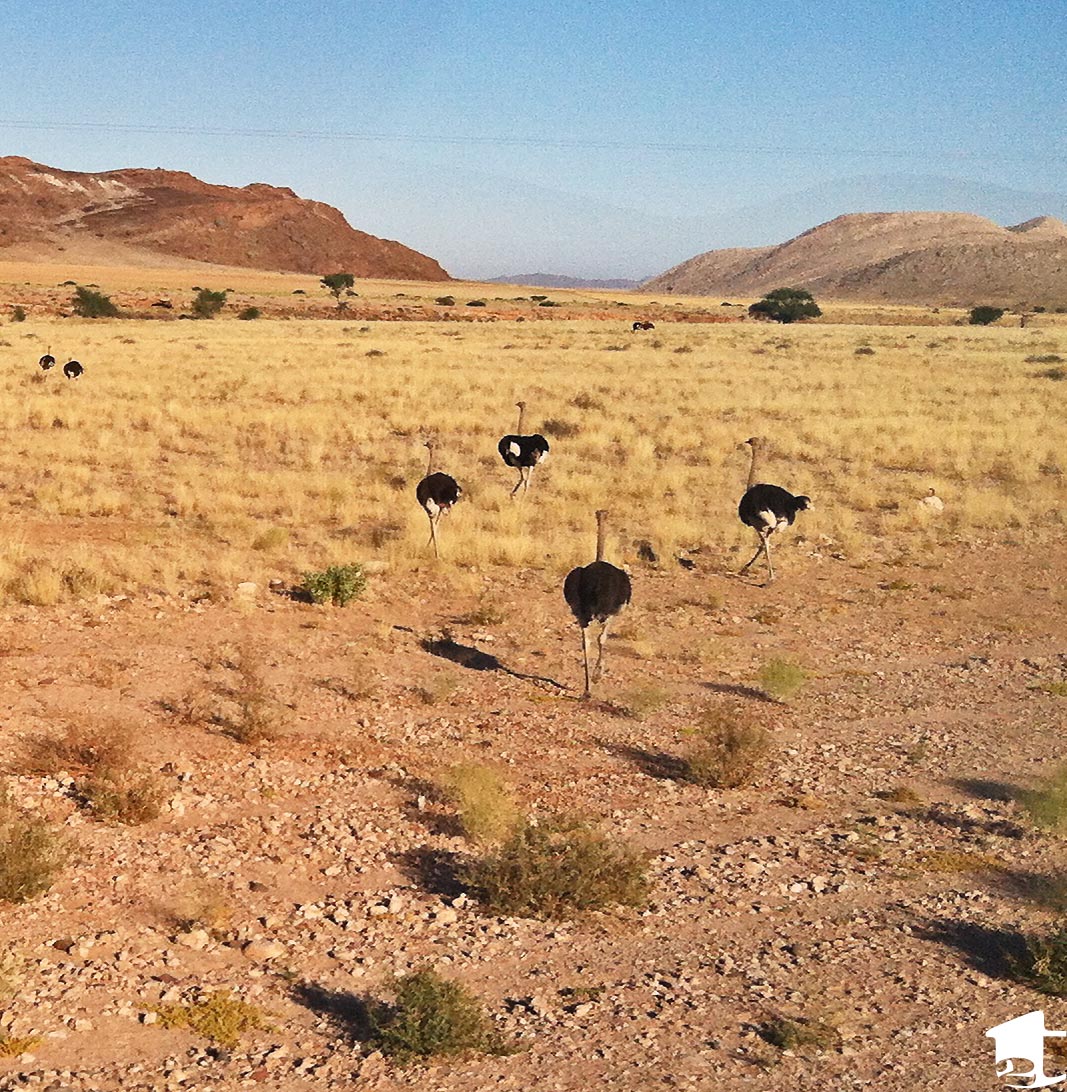 A road trip through Namibia isn’t what I’m used to back in the States. Instead of passing the time during a tailbone-aching eight-hour drive by counting silos or punch buggies, “ostriches left” or “baboons right” is shouted by fellow travelers in the safari truck. Hundreds of kilometers might pass under our tires without civilization appearing outside the window. Rest stop complexes are as rare as unicorns. Though they are not expected where they have never existed. When we pull over, the side of the road is a makeshift toilet and a large tree provides a shaded respite for lunch. The sun feels hotter here, beaming down a skin-penetrating heat that has never made me more thankful for SPF 50. Even right now in the rainy season, clouds barely exist, allowing the heat to flood kilometers of barren land. The plants that dot the scorched earth thrive in these conditions and the animals that burrow underground risk death when rain does fall and fresh mud traps them too deep below.

The laws of nature seem to play out as they should, exempt from too much human intervention. Expansive natural parks preserve the landscape so it isn’t leveled to make way for people and a token zoo, ironically serving as some kind if in memoriam to the land’s previous inhabitants. This is not to say that the opposite isn’t true and hasn’t happened. Poachers are a serious issue, and human expansion and carelessness has hurt animals here and worldwide. But amid all the destruction, it’s refreshing to see that some care enough to preserve the land.

“If this isn’t nice, I don’t know what is,” Kurt Vonnegut echoes inside my head, reminding me to appreciate the moment. I nearly fly vertically out of my seat to see the springboks hop along on their invisible pogo sticks. They’re so graceful and carefree. This time, it’s hard for the smile not to show up on my face. For all the springboks I have seen and will see, I know this spellbinding excitement will not run dry.