It was midday and I was sitting naked on the edge of a square marble countertop unsure where to direct my gaze. A topless Turkish woman held my left hand as she scrubbed the length of my arm with more vigor than I ever had before. As the two of us locked eyes, she forced a smile below her light mustache, and I wondered what would come next.

An hour earlier, Mike and I sat in front of an overworked fan at Mavi Guesthouse in Istanbul. We gave Ali, the owner, the thumbs up, and moments later he ushered us into a cab outside the hostel.

The car cruised down the cobblestone roads and sped up occasionally with magnetic attraction to pedestrians. Looking out the windshield was reminiscent of the city course in arcade racecar games, so I turned my head and watched shops whip by outside my window. 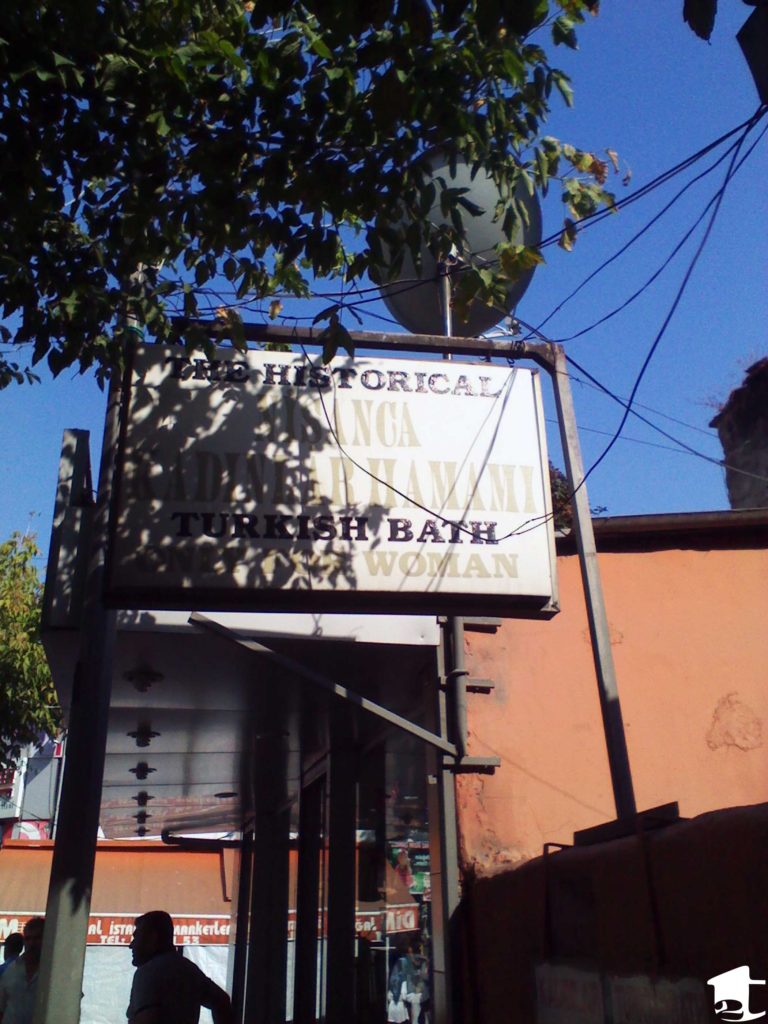 On the sidewalk, outside the hamam

In no time, not surprisingly, we were there – at the hamam, or Turkish bath. Mike and I walked inside, and as quickly as we came in, I was escorted out by a balding overweight Turkish man. He slowly led me down the narrow sidewalk and into the women’s hamam.

Two older Turkish women sunken on couches in the middle of the room lazily greeted me. After a quick exchange with the man, they realized I was a paying customer and looked at me with a newfound glow in their eyes. With great effort, the younger of the two pushed herself off the couch and showed me to one of many changing rooms that encircled the lobby.

Mike and I had prepped ourselves by reading online a little about hamam etiquette and what to expect. My eyes scanned the 4’ x 6’ changing room. There was just enough space for me to walk in, stand, and turn my head to see what resembled a small pleather therapist’s couch. On the wall was a mirror and two hooks, one occupied by a white towel. A pair of sandals that have surely seen better days sat on the floor flush to the wall.

I remembered reading that sometimes people leave their underwear on, but it didn’t make sense to me since this is a bath and I would surely get wet. I didn’t bring a change of clothes, so I undressed completely, wrapped the towel around myself and reluctantly slipped my feet into the brown, slowly deteriorating sandals. If I had made a mistake, I figured the women would direct me back to the room.

I stepped out, locked the door behind me and followed the younger old Turkish woman into the humid marble-floored bath area. It was empty even though the brochures littered around the city pictured it teeming with half-naked women. I could feel the disappointment of all the men who studied the pictures and mistook it for reality.

What I did recognize from the brochure was the makeup of the rounded rectangular room: a 7’ x 7’ square marble slab sat in the center, lined by more than 10 marble basins, and there were entranceways to what appeared to be private bathing rooms extending from the main room. I tilted my head back to see the skylight, and it was hard to imagine that I was standing in a 527-year-old hamam.

The Turkish woman grabbed a hard plastic blue bowl from a stack in the back of the room and turned on the faucet above a basin to the right of the entranceway. She motioned me over and reached out her hand for my towel. This was the moment of truth: Would she be appalled that I was without underwear? Nope. She told me to sit on the marble ledge and began using the bowl to gather water from the basin and pour it over me. She motioned for me to continue this action using my own arms and energy while she left the room for 15 minutes. I imagined this to be the part of the process that opens my pores, prepping my skin for the scrub-down that was to come.

A middle-aged woman wrapped in a towel entered the room while my Turkish guide was away. She headed straight for the private bathing area, and I was thankful because I wasn’t completely positive that I was doing the correct thing with the blue bowl I was given. I wondered if she was naked under the towel too. How embarrassing for me if I wasn’t supposed to be leaning naked against a wall pouring water over my body with a blue bowl. Luckily she stayed in the private room, probably aware that this first-timer was on the brink of embarrassment. 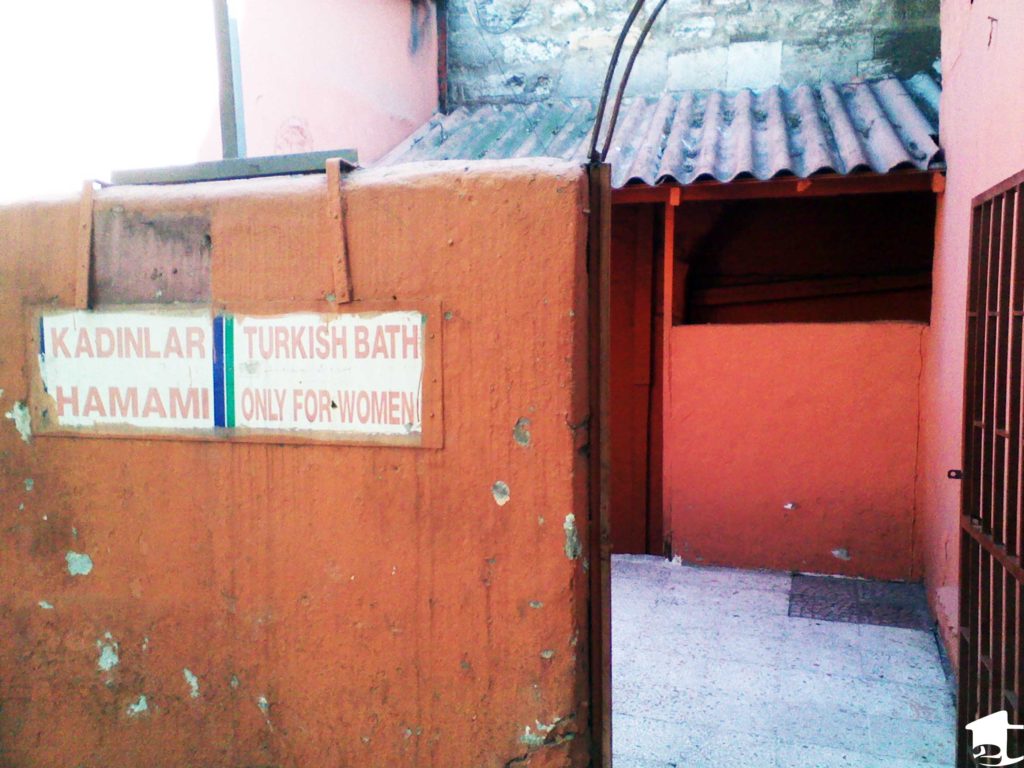 Women’s hamam entrance. Sorry, no pics allowed on the inside. Only for brochures 🙂

When my Turk returned, I didn’t recognize her. She was naked, save for maroon underwear bottoms. I thought she was another new patron, and I was officially embarrassed that I had left my underwear in the room. Now they could definitely peg me as the ignorant foreigner. But she surprised me by motioning me over to the marble square, and I realized I should start paying better attention to people’s facial features.

She threw a bucket of water onto the marble slab and told me to lay prone. Standing next to me, she pulled a black scrubber glove over her right hand. Every inch of my skin detached itself and curled up under the back and forth motion of her gloved hand. I flipped over, and after she scrubbed down my front side, arms, neck and face, she directed me back to the basin to rinse off.

My topless Turk left the room and I looked at my skin in disgust as I walked to the basin. There were sticky little black specks all over my body that weren’t coming off with a simple brush of the hand. I sat down on the smooth marble ledge and poured tepid water over my left forearm, and the stubborn black substance was still there. I thought that it was pieces of her black glove that stuck to me, and I tried desperately to wash them off. It never occurred to me that it was actually pieces of my dead skin sticking to my body. When Mike and I exchanged descriptions of our experiences later, he clued me in to what was actually tangling to my hair.

After my futile attempt to clean my skin, my Turk returned with a large soapy yellow loofah. “Thank goodness!” I thought. I would’ve been one dissatisfied customer if I was expected to clean myself by myself.

Section by section, she scrubbed and massaged my body. As her thumbs dug into my muscles, I gradually closed my eyes and told myself to loosen up and relax. I tried to remember that I was on vacation, or retirement, or whatever it is I’m currently doing with my life.

I thought about the hamam and didn’t think that the concept was something that could ever make its way to the United States. Not without having customers sign multiple releases and owners having to completely change the whole process, setup of the room, and uniform, or current lack thereof, of the workers. Americans are just too prude.

After soaping me up and giving me a decent but much needed massage, she doused me with cold water, washed my hair and had me shower myself with bowlfuls of tepid water again. I reached for my towel, which was hung above my washbasin, but she instructed me not to. “No towel yet,” she said in English. Then she led me into the sauna.

When I left the hamam, I tottered back to the men’s entrance to find Mike, but he wasn’t out yet. I passed the time by window-shopping at a corner shop. Turkish delight, nuts and figs filled my eyeline. I turned my head and Mike was standing next to me. We were both in a relaxed daze. Our gait was slow and our sentences incomprehensible. Onlookers probably thought we were high on drugs.

Despite our outward appearance, we felt reinvigorated on the inside, and our skin was marble smooth. The experience cost us under $30 (USD) each, tip included, and provided us with a mind-clearing steam bath, an exfoliating scrub-down, a lather, massage, hair wash and sauna time. It was extremely refreshing and unlike anything I’ve ever experienced before. And now that I’m no longer a first-timer, I’ll be able to let my mind go a little more should I get the opportunity to return.