My 30-pound pack weighed heavy on my hips. As sweat gathered underneath my insulated Marmot jacket, I frantically searched the airport departures screen for my 11:40 a.m. flight from Prague to Madrid. It wasn’t there.

I checked my watch. 10 a.m. My left thumb picked nervously at the nail of my middle finger as questions raced through my head. Being less than two hours away from departure time, the information for my SmartWings flight should have appeared on the board. Trying to keep my composure, I briskly walked to the information desk.

“Uh, dobre den,” I nervously greeted the attendant. “My flight isn’t on the board. It leaves in just under two hours.” I slid a sheet with my flight information under the glass barrier, and the woman behind the desk began flipping through papers to find my check-in counter.

“Yes, my paper shows this flight number yesterday. SmartWings will not be flying to Madrid today. You might want to go to their office. It’s over there.” She pointed to a small counter on the opposite end of the main terminal.

Thanking her, I stepped back and looked at my confirmation sheet, which indicated that my flight was scheduled to leave that day, not the day before. Questions moved like a whirlwind through my mind: How did this happen? Will I be able to get on another flight today without it costing me a fortune? Do the people I need to talk to speak English well enough? And, of course, the overarching question of how I would get to Spain, where I had already booked and paid for hostels for the next two weeks, without a flight. Taking a train that far wasn’t an option – it would be too expensive and time-consuming.

Snapping out of my trance, I scanned the airport for my boyfriend (Mike), who was checking in at the Lufthansa desk for a return flight to the States. I ran up to him and took a deep breath before blurting out my unfathomable situation. But Mike had troubles of his own. The airline couldn’t locate his reservation back to the States, saying they didn’t even have confirmation that he was on the initial flight to Europe. And to top it off, the return flight was full. Some kind of bad karma had fallen upon both of us.

The Lufthansa attendant returned, so I left Mike at the counter to connect the pieces of my own problem.

Six months earlier, I solidified my decision to travel for a few months after my December graduation from college. Having not studied abroad, my travel itch was intensified, especially after receiving countless e-mails during my junior year from friends traipsing across multiple continents. I yearned for an opportunity to experience other cultures, practice my language skills and see the sights of Europe.

It was also a perfect two-week vacation from work for Mike, who had lived in Prague for two years and hadn’t been back to Europe for quite some time. During our short trip together, Mike took me to his favorite spots in Prague, Paris and Vienna. I liked having him play tour guide while I got accustomed to traveling through lands unknown.

But now began the real challenge of depending on myself. With no previous experience of traveling solo, I wasn’t yet accustomed to making tough last-minute decisions. This was the first setback I had to figure out on my own. 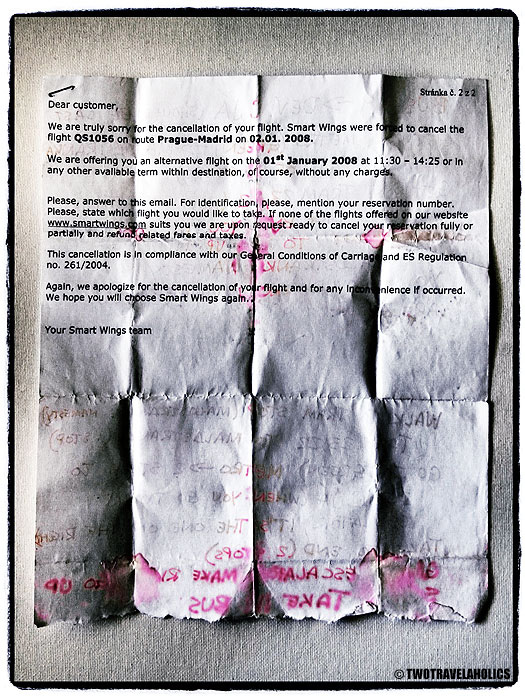 I kept the SmartWings cancellation printout, but not for the memory of missing my flight. On the back, Mike wrote directions to help me navigate Prague. That part of the experience makes me smile. (Click image to view larger.)

I arrived at the SmartWings desk, trying to be as pleasant of a frantic traveler as possible. After explaining the situation, the receptionist informed me that the flight had been cancelled two months earlier and an alternative flight was scheduled for the previous day. They notified me via e-mail as soon as the change occurred, she told me as she slid a copy of the message across the counter. My heart sank as I stared at the e-mail addressed to my account. I hadn’t seen it in my inbox or spam folder. “I never got this,” I said in a shaky voice.

Immediately, I thought I’d have to pay full fare for another outbound flight. Why would SmartWings help me if they already sent notification of the alternative itinerary? The airline did its part, and I was a day late in fulfilling mine.

Demoralized and nervous, I stood frozen in front of the SmartWings counter, staring at the printout, not knowing what to do next. I was about to walk away and sort out my thoughts when the receptionist, feeling sympathetic and helpful, told me there was a possibility she could get me on the next day’s flight to Barcelona for no extra charge.

Yes! I was wrong about them. There are still compassionate and customer service-oriented people left in the airline industry. They’re just in Europe.

Despite this wonderful opportunity, I was stupidly obstinate about going to Madrid that day. I hadn’t yet built up the courage to be spontaneous and veer off the itinerary I pre-booked. (Travel note: Hostels actually didn’t charge when I cancelled reservations within 24 hours of scheduled check-in.) I wanted to find a way out and assumed there would be a few Ryan Air-esque cheap seats to Spain. So instead of jumping on the SmartWings offer, I did what any illogical thinker would do and set out to buy a ticket to Madrid from another airline, despite knowing I would lose the money I spent on the SmartWings flight.

That bad karma seemed like it was still upon me. I hopped from one airline’s desk to another with no luck. Flights were either full or too expensive for my limited budget. Thinking I discovered a $50 flight at one counter, I handed over my credit card. Upon recalculating the exchange rate in my head, I realized the cost actually came to $500 and quickly rescinded the request before my card was swiped. After a vain attempt to leave the winter-blasted city that day, I realized there was only one smart next step. So I walked back to the SmartWings counter to book the next day’s flight to Barcelona.

In retrospect, spending one more day in beautiful Prague is nothing to be upset about, especially since the flight to Barcelona was at no extra cost and I was able to get a refund on the hostel I booked in Madrid. I should have been thankful and relieved, but I wasn’t. Nervous would be an understatement. I was scared. I was scared to break away from my travel partner for my first solo experience. And if I was going to do it, I wanted it to happen the way I planned: Both leaving Prague on the same day. It was a total mental game for me. 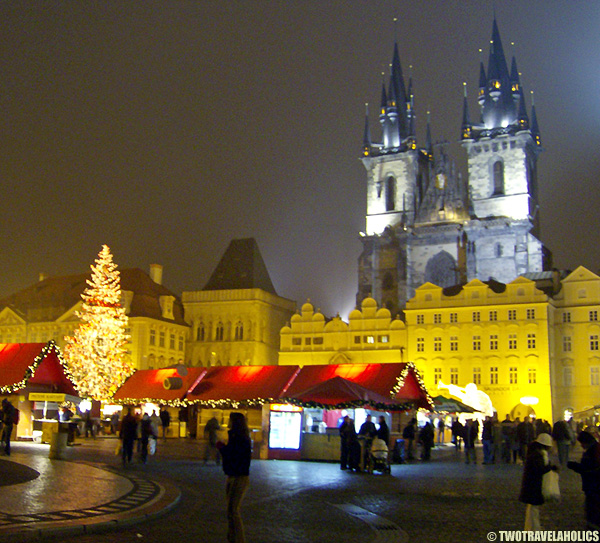 Back to Prague after our airport goodbyes.

Mike lucked out. Lufthansa was magically able to give him the last seat on the flight, despite not being able to find his reservation. When we met back up, he didn’t have much time before departure. Since Mike had been my tour guide, I foolishly hadn’t pay much attention to street names, bus numbers and tram stops, and had no idea how to get back to the kolej we stayed in. He generously used his last few minutes with me to write out roundtrip directions to the kolej and also to what had become my favorite food joint. Mike talked me through the directions as he wrote, just to make sure I would be okay on my own.

We said a quick, tearful goodbye. And as I watched him go through security and vanish from my sight, it hit me that I was alone.

The accumulation of the last hour’s events was a lot to take in, so I sat down to calm my thoughts and regain mental strength. Looking around the terminal, I considered staying and spending the night. Why not? It would be free and I wouldn’t have to trek back through the city. I vanished the silly thought from my mind and remembered that I was a backpacker, in Europe, for three months. So I strapped on my pack, stood up tall and walked out of the airport to catch the bus back to the center of Prague.