My father first introduced me to kimchi when I was a child, but the putrid smell of spicy, fermented cabbage was enough for me to swear off eating it for more than a decade. Then in my 20s when traveling in South Korea, I ate it again and, unbelievably, enjoyed it. It is strange how our tastes evolve over time. 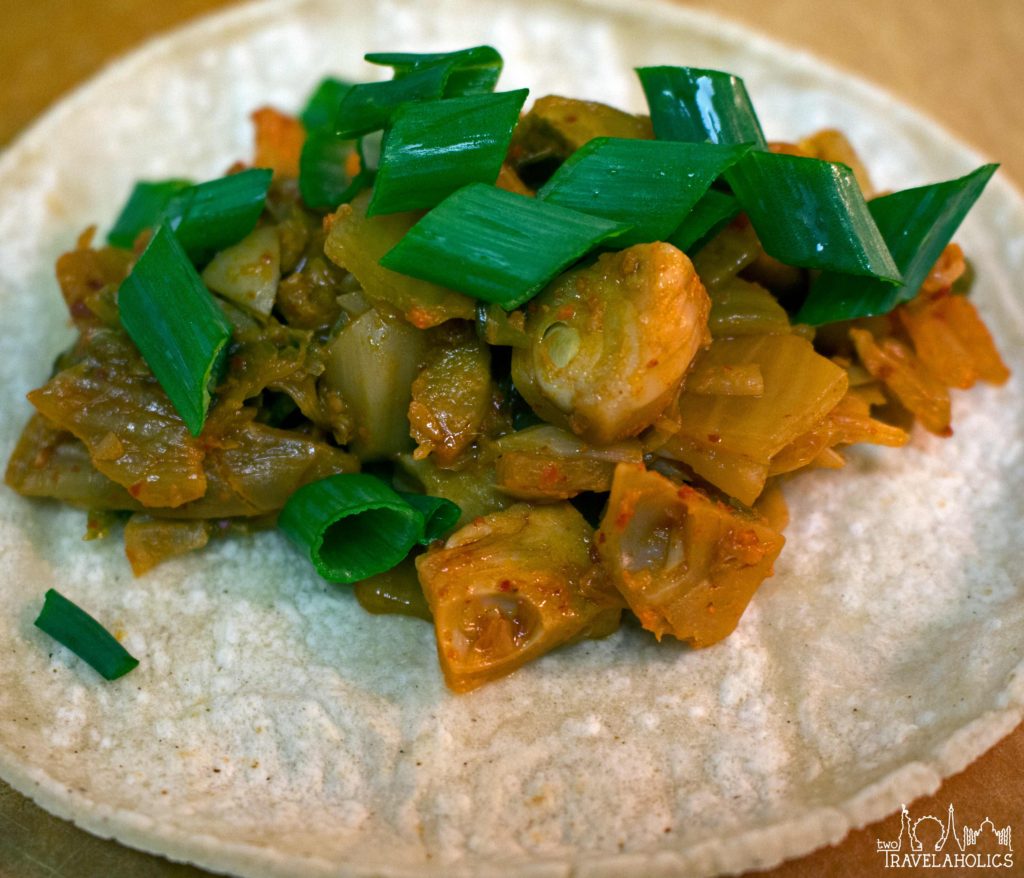 Likewise, four and a half years ago, my diet shifted from one heavy in meats to a mostly vegetarian diet with occasional seafood. The largest challenge for me when I was transitioning to this new diet was finding ingredients with textures that would adequately replace that of meat in recipes.

During our RTW trip, I acquired a taste for ripe jackfruit. Shortly after returning home to the United States, I found young canned jackfruit in brine. Intrigued, I bought a couple cans and happily discovered that it makes a wonderful alternative to the usual vegetarian options (tofu, seitan, tempeh, textured vegetable protein, etc.) that we had been using as a meat substitute.

We came upon a recipe somewhere that combined jackfruit with kimchi. It was imperfect, so Tara and I continued experimenting with variations until we ended with the version of this recipe (choices like using corn tortillas instead of flour, adding sesame oil to mellow the kimchi flavor and mushrooms for umami). Since these tacos are inexpensive and quick to prepare, we’ve made them part of our regular rotation of meals.

As I explained, our decision to go meatless was a personal one. This recipe is vegan and we encourage meat lovers to try it as-is instead of substituting the jackfruit for meat or adding meat to the existing recipe. The consistency of jackfruit is a good replacement for the shredded pork or chicken texture, and it really soaks up the flavor of the marinade well. Let us know how yours turns out. Happy eating! 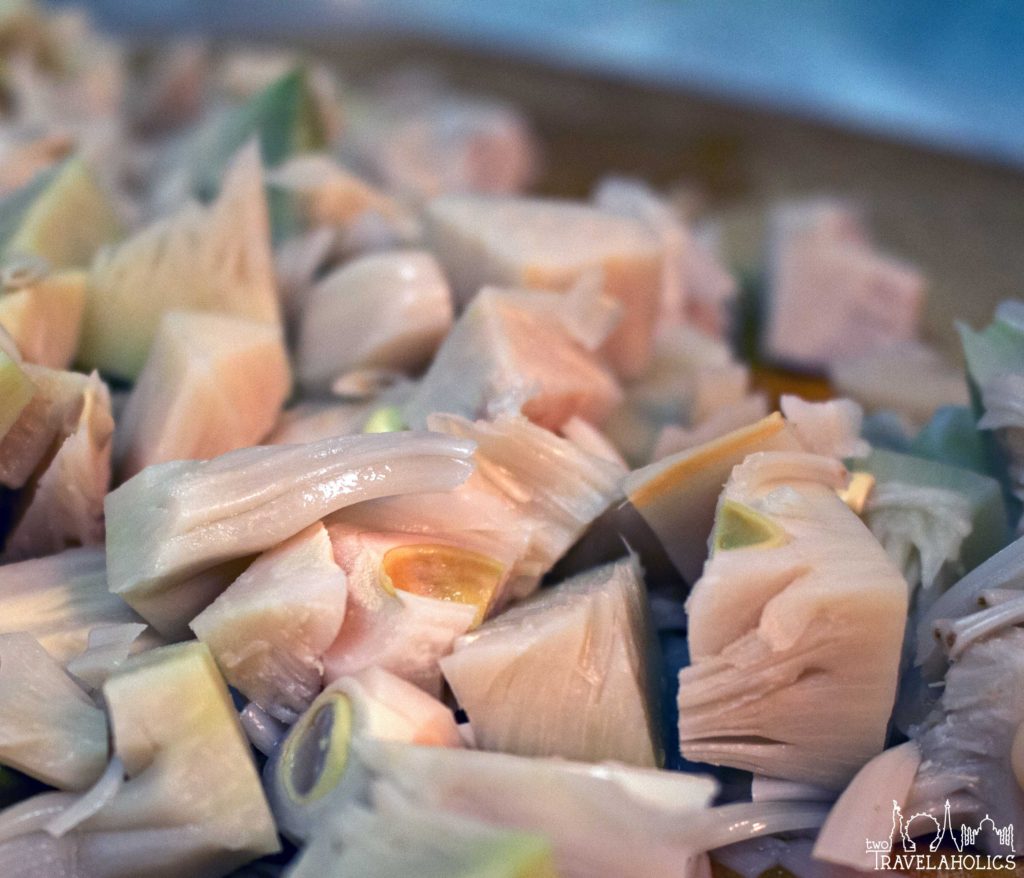 Step 2: Whisk together kimchi juice, teriyaki sauce, green onions, 1 tablespoon of sesame oil, and filtered water in bowl. Pour the marinade over the jackfruit and mix in chopped kimchi and mushrooms. Mix ingredients together, then cover the bowl and refrigerate 8 hours, or overnight. 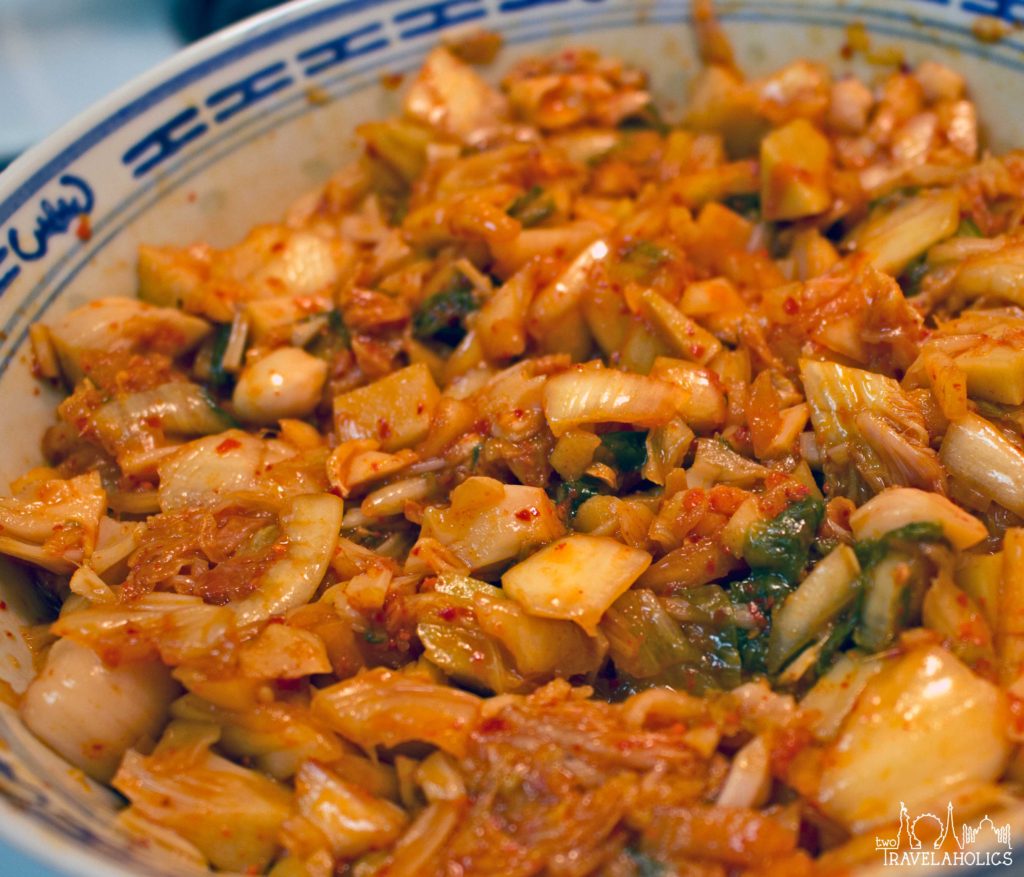 Step 4: Serve inside warmed corn tortillas, and garnish each taco with green onions and/or cilantro. Enjoy!