Welcome to our series called Friday Chewable: Food for Thought. Once per month we post a new topic to open your mind, challenge your ideas or just give you something to think about over the weekend.

This installment of Food for Thought will give you a deeper look into the Couchsurfing community through a Q&A with current members from four continents. When we tell our American friends and family about our Couchsurfing experiences, they usually respond by saying that the opportunity sounds worthwhile but that hosting or staying with a stranger is outside their comfort zone and something they could never see themselves actually pursuing. I understand, given the level of trust required and the factors that seem beyond one’s control. In this case, though, experiencing it once for yourself can change your entire outlook. We’d like to share some insights from the international Couchsurfing community to leave you with more food for thought. Submit your opinions and impressions in the comments section below. 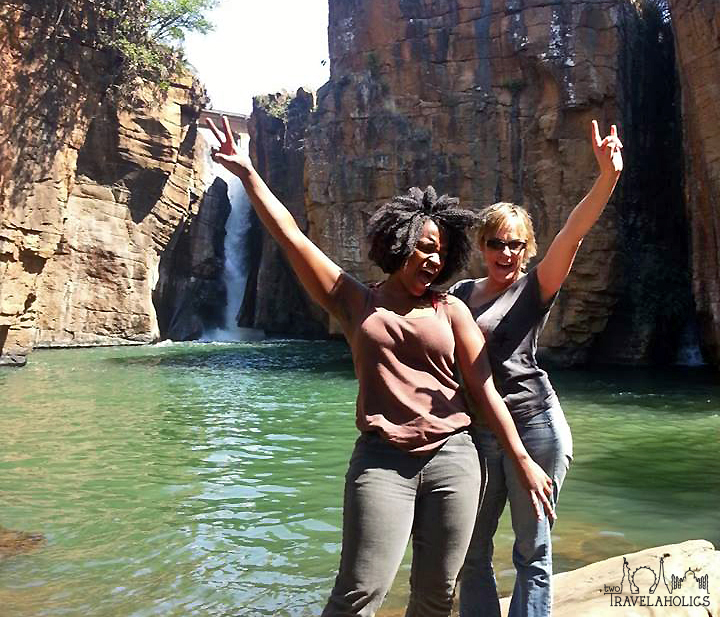 What was the initial reason you signed up for Couchsurfing?
I love meeting new people and I love traveling. I don’t currently have the time or finances to travel myself, so I decided to bring the travelers to me. What a fantastic experience that’s turned out to be! It has been such a mind-broadening adventure for me as well as the kids!

What is the most memorable or insightful experience you have had as a result of the Couchsurfing community?
Too many to pick from! I’ve met a girl from Nigeria doing her PhD in drama, two French students traveling the world on kick scooters and writing a book on social entrepreneurs, an American couple who chose as their honeymoon to sell all their belongings and travel the world for a year…. I could go on. My next couch surfer is a Taiwanese collecting photographs of laughing children all over the world. Couchsurfing is full of wonderful interesting people, selfless enough to open up their homes to strangers around the world, and humble enough to not mind sleeping on a couch.

What is one tip for those who are hesitant to try it out?
Remember that you are in control of who you allow in your house. I have definitely denied some couch requests. If someone doesn’t have enough information about him/herself, or doesn’t have references, or sounds “dodgy,” I don’t accept. You will quickly become familiar with the true Couchsurfing spirit, and learn to identify people trying to abuse the system. 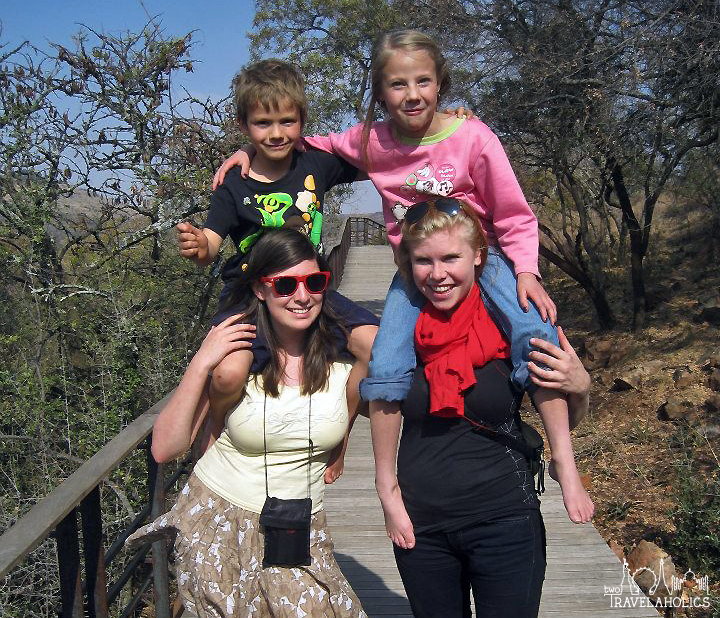 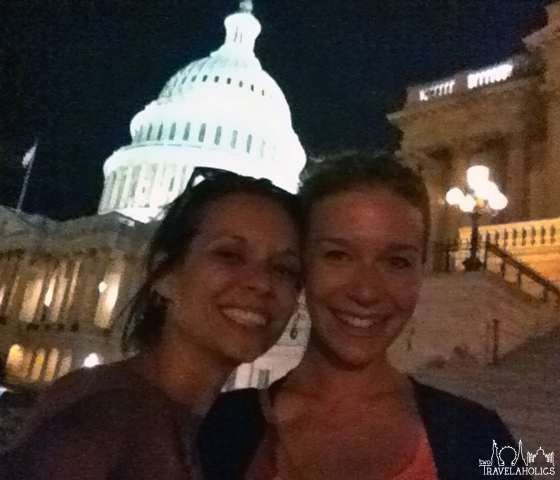 Tara and Indie at the Capitol in DC. (Yes, a terribly dark smartphone picture.)

What was the initial reason you signed up for Couchsurfing?
I originally was looking for a cheaper way to travel but after I discovered CS I realized it was also about being part of a community. The idea of being able to make friends with local people and share experiences with them made the whole idea much more appealing. It also allowed me to let go of the idea of it being about cheap travel and open up to it being more about a complete experience.

What is the most memorable or insightful experience you have had as a result of the Couchsurfing community?
So far it would have to be when I surfed in Puerto Rico (of the couch variety obviously). I found myself in a country surfing for the first time that was far from home and a great contrast to young and sweet New Zealand. The language, the culture, the environment – especially the level of crime – took me a bit to get used too. Even though I had checked references of the host, looked up the address, Skyped and even booked a backup place to stay, I still started to panic a little once I arrived. All I could think about was the movie Taken and if I had a Liam Neeson to come kick some ass for me. Eventually we met and the first thing he said to me was “Welcome to PR. You have your own space in a secure apartment and there is food, a bed and a shower. You can have them all and I can’t wait to show you around the city tomorrow.” If you have ever traveled on your own on a budget you will understand how amazing those things are especially a new friend and I now have a new one for life.

There are definitely weird people out there, but there are more good ones than bad and if you can knock down some cynical walls and just be aware, you can make some new friends that can stay with you forever.

What is one tip for those who are hesitant to try it out?
Just to check the pages of their references and to Skype them and talk about what it’s like to be in their city or town.

If the person can’t make an effort to Skype you then they possibly might not be able to make any time for you at all during your stay and it’s no fun just feeling confused and lost placing all your faith in Google. Once you Skype, you generally realize that they are a very normal human being and that they are just as nervous about who they are letting into their home.

Name: Clelia
Nationality: My passport says Austrian, altough I would like one that just says “European”
Age: 32
Number of years as a Couchsurfing member: 10 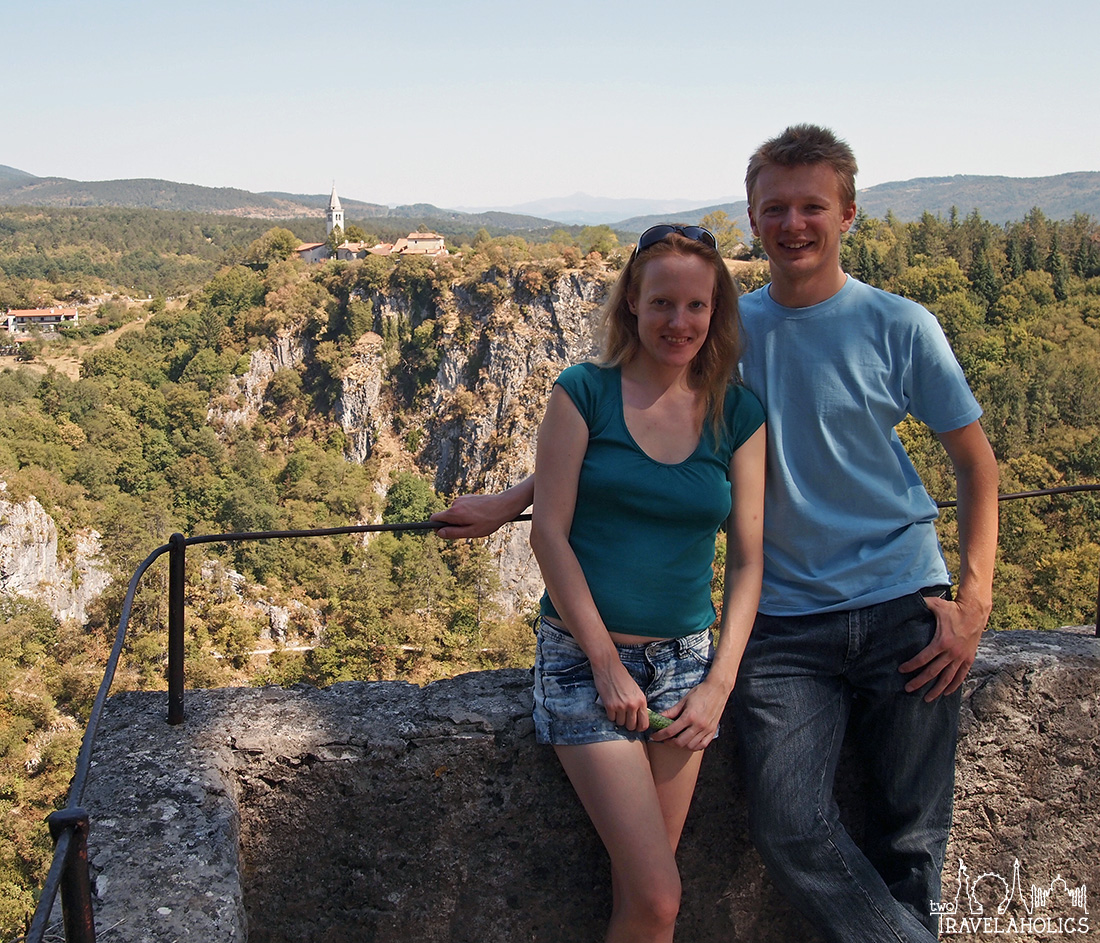 Clelia and Ruslan, our CS hosts, in Skocjanske Jame, Slovenia.

What was the initial reason you signed up for Couchsurfing?
Curiosity. A friend had told me about it (that was back then when CS was not that widely known yet).

What is the most memorable or insightful experience you have had as a result of the Couchsurfing community?
Couchsurfing in Finland before moving there taught me a lot about the country (especially how small Helsinki apartments are – but still somehow they always found space for a couchsurfer 😉 ) and helped me settle down and make friends there.

What is one tip for those who are hesitant to try it out?
Go to a CS meeting. That’s what I did right after signing up. It gives you a fairly good idea what kind of people to expect as your guests and/or hosts, and you can ask whatever questions you might have. Chances are you’ll even find some new friends in your hometown. 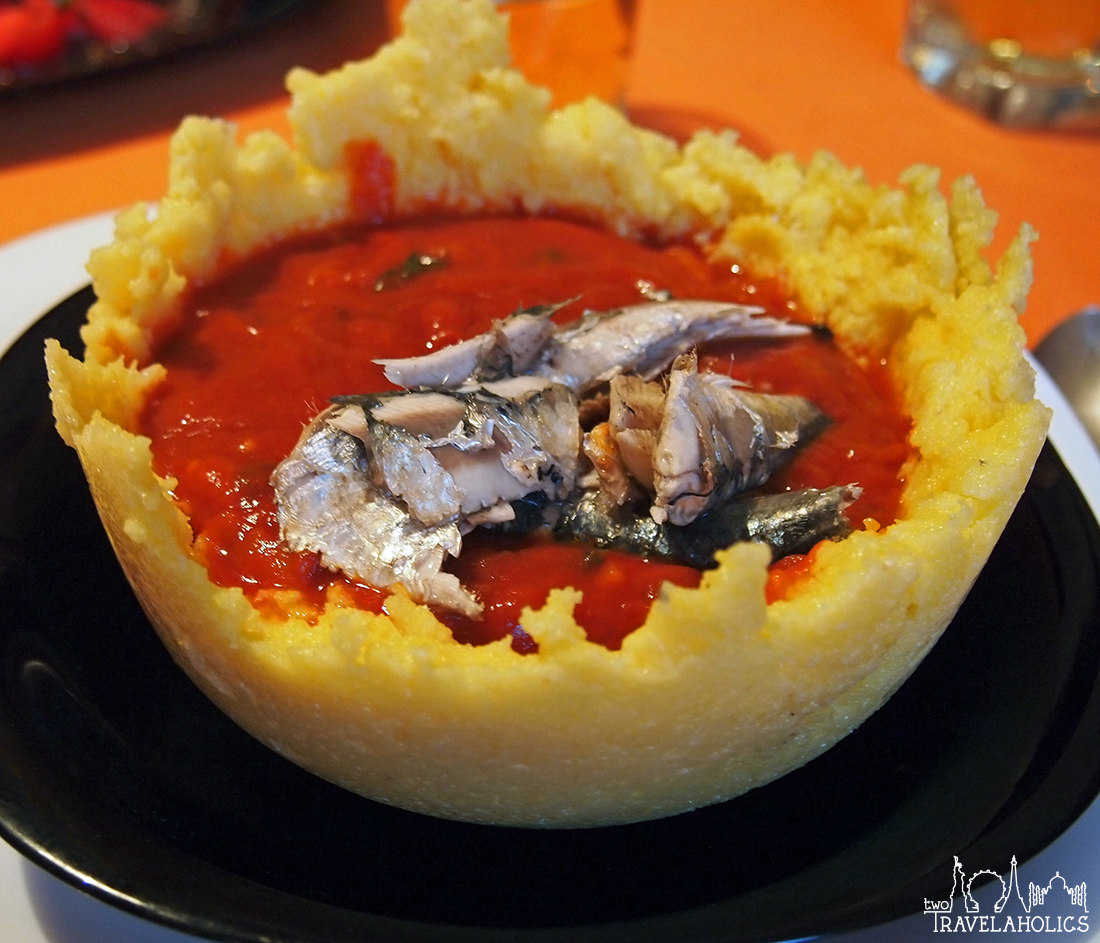 Croatian meal that Tanja made for us while CSing with her.

What was the initial reason you signed up for Couchsurfing?
Well I saw a TV reportage (very accidentally)….it intrigued me and I went to read further….. it seemed genius and shocking at the same time….somebody knew already how my perfect trip plan would look whilst I couldn’t even put it into words by myself.

But tolerance I guess. And it definitely makes a switch in your head, developing an “extra” sense. I took some non-CS friends with me on some trips and I somehow ended up a bit like a moderator of two different worlds. People usually travel for holidays want it to be “relaxing” – coming, leaving, drinking, eating, talking when and what you like. But when you are in someone’s home, you’re not the (only) one setting the rules. I wouldn’t go too philosophical on the reasons behind, but some find that liberating, others a prison.

What is one tip for those who are hesitant to try it out?
Try a trip with CS. And then without. You’ll never go back. 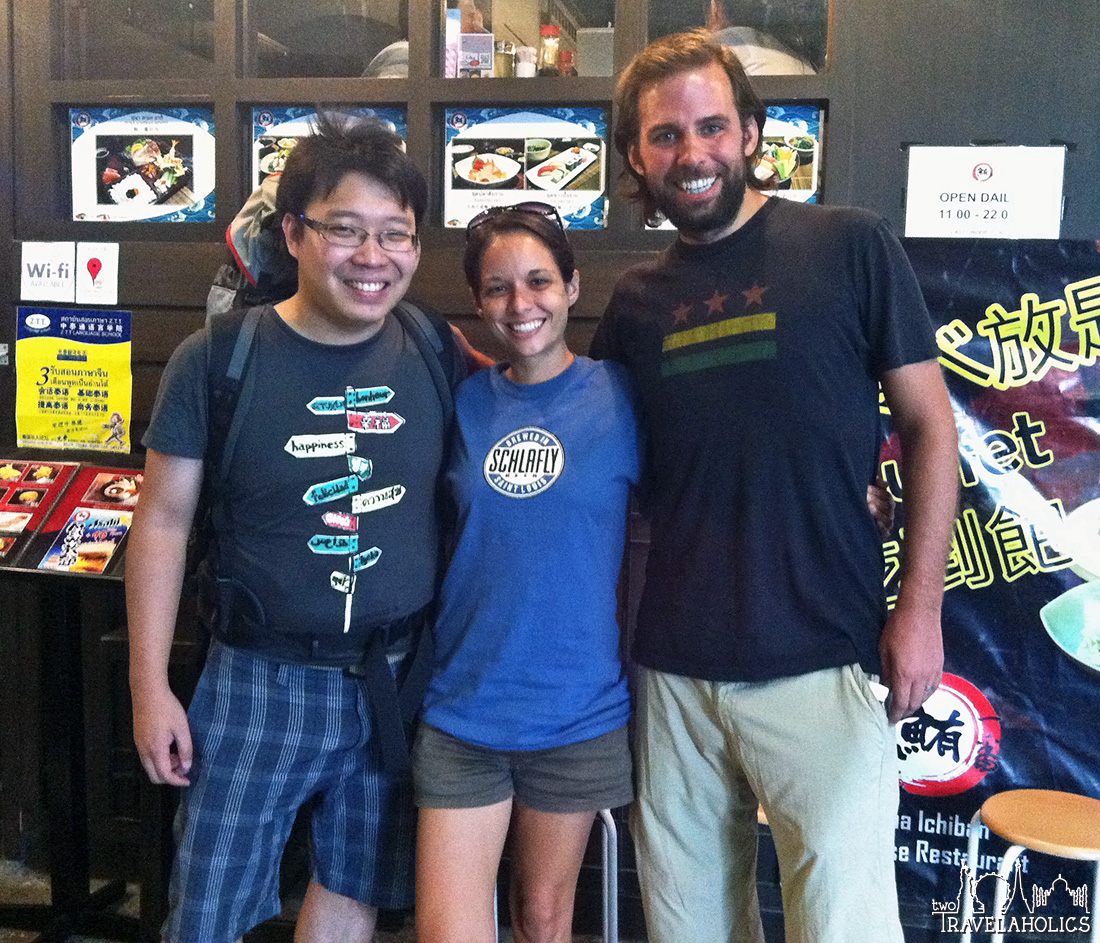 Mike & Tara with Isaac after eating sushi in Bangkok.

What was the initial reason you signed up for Couchsurfing?
My penpal from Austria introduced me to this website because I was super keen of traveling and having the thought of traveling around Europe for a year.

What is the most memorable or insightful experience you have had as a result of the Couchsurfing community?
Getting to know super amazing and awesome travelers! They are sharing so many inspiring and interesting travel stories!

What is one tip for those who are hesitant to try it out?
Just do it and stay vigilant!