I was anxious about crossing into Cambodia. Mike and I read up on a couple border scams and we were prepared to be misled and lied to, but I didn’t know how our pushback would be received. One thing was certain: We were determined to exit Thailand and enter Cambodia without paying a cent more than the official rate.

We had a few options for getting from Bangkok to Cambodia (trains, buses and combinations). Ultimately, we chose a relatively new bus service run by the Thai government that travels directly from Bangkok to Siem Reap. The direct route seemed like the quickest and easiest option. We could also order the bus tickets online, which we love to do so we can accumulate credit card reward points. We thought that using a government bus would mean avoiding the infamous Cambodia visa scam, but we were wrong. 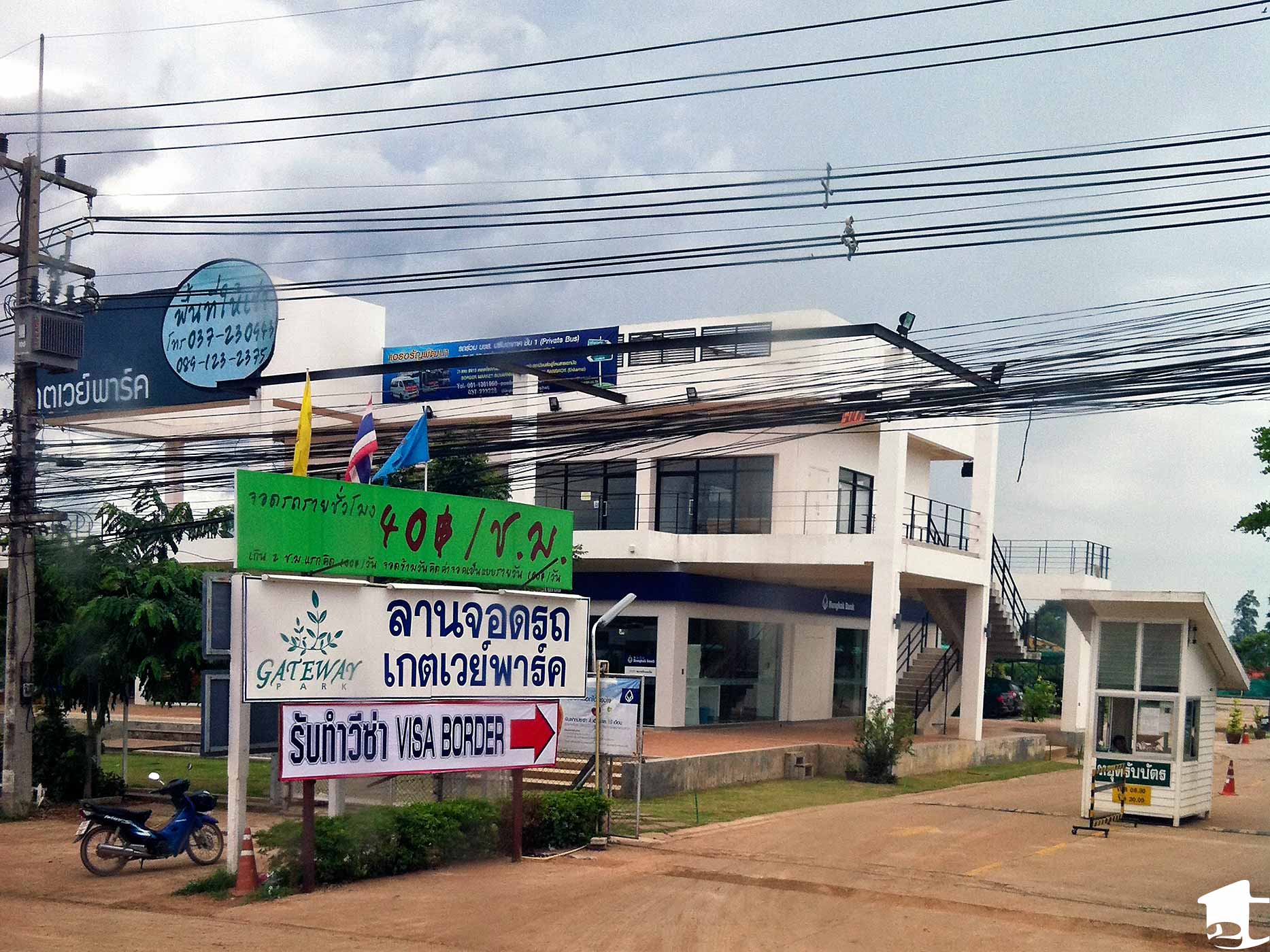 Turn right to encounter your first visa scam of the day!

Again, we read online that others who had gone this route were still dropped at a Thai-side travel agency set up to look like the official Cambodian visa office. Here, travelers are charged a significantly higher price ($37 versus $20) to purchase a visa [note: fellow traveler Jeremy commented below on 7 October 2015 that the price is now $30 USD]. Some of that money goes into the bus driver’s pocket for making the stop.

We’re pretty adept at border crossings at this point in our trip. There is no way we could have purchased a Cambodian visa from Cambodian officials without first exiting out of Thailand. If they were going to try to fool us by stopping at this travel agency, we’d just stay on the bus.

As expected, they stopped at said agency and tried to get everyone to go inside. We lied saying we had our visas already and stayed put on the bus. A couple Finns were hesitant to stay on too, so we reassured them that this was the right decision.

The bus attendant handed out pre-fab lunch boxes while we all waited for the agency to drive everyone’s passports to the border office and back. After lunch, we drove to the Thai border and made a smooth exit. We were to walk through no-man’s land to the Cambodia border, then meet the bus after getting stamped in. 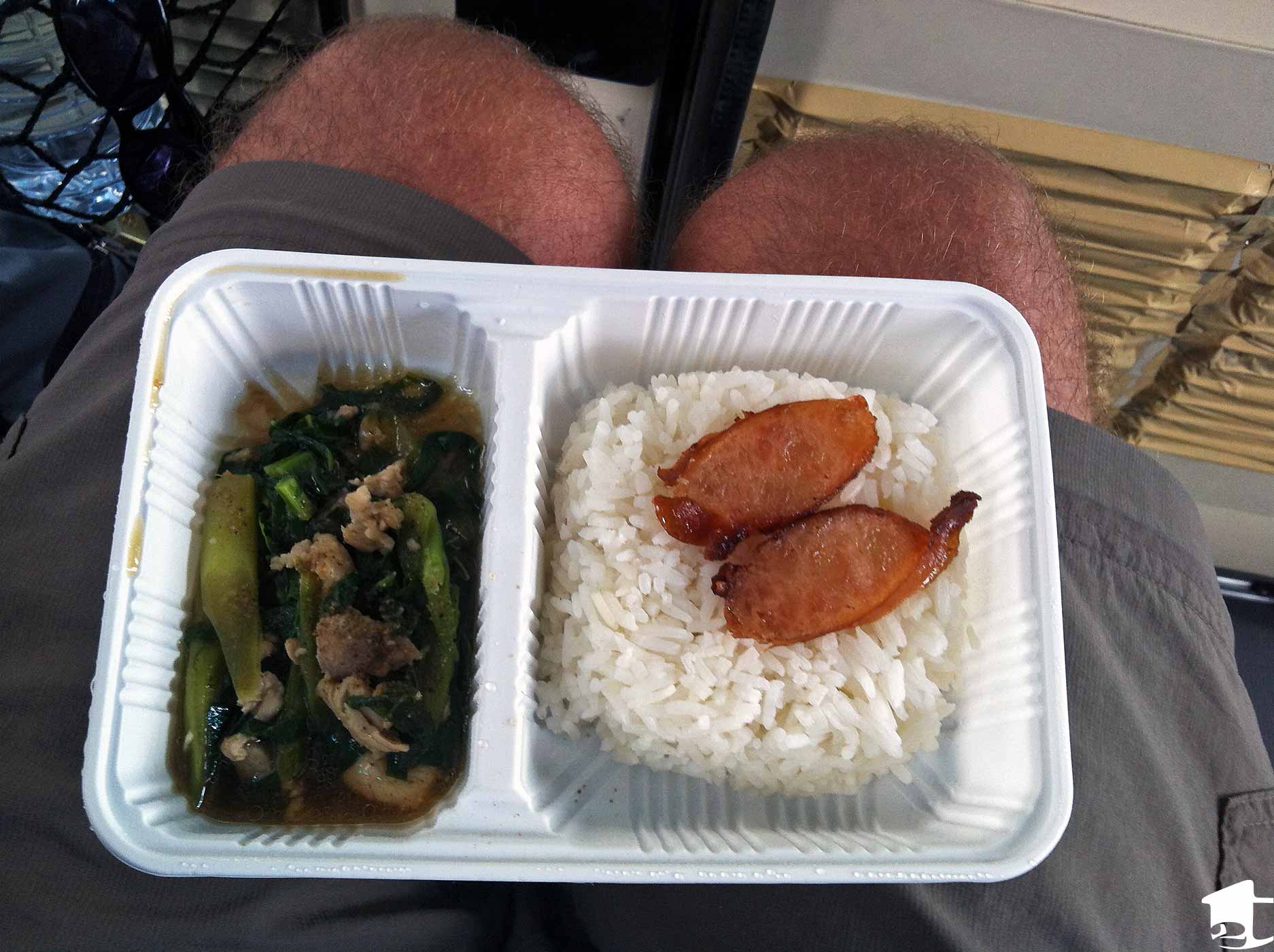 Lunch on the bus while we waited for others’ visas to be processed.

We walked out of Thai immigration and followed the signs that led us to the visa on arrival building. Here we encountered another scam we were prepared for. Single-entry tourist visas are $20 USD, no more. After filling out our visa applications, we handed our forms, photos, passports and cash to one of the officers. He looked up and said, “One hundred baht.” This is the equivalent of a bit more than $3 USD. It’s obviously not breaking the bank, but it’s not an official fee and there’s nothing we hate more than being taken advantage of. Prepared for the fight, we said no. Mike pointed to a blue visa sign overhead that clearly read “Tourist Visa $20.” Then the officer pointed to a white piece of paper with big bubble letters showing 800 [baht] and $20 + 100 [baht]. We didn’t even have baht left and said, “No baht,” to which he responded, “Three dollars.” Again, we pointed to the official sign. With others coming in, he gave up and shoed us off to wait while they processed the visas.

We knew ahead of time of the scam and read that it’s easy to shrug off (while the Cambodia-Laos border “stamp fee” is pretty much unavoidable). Another thing we read for the Poipet border crossing (but did not encounter) is that they might try to tell you that you need to show an international health card, which is not officially necessary.

To our surprise, we saw others from our bus handing over visa forms, which means that even though they entered the agency, they caught on. After receiving our passports back, we headed for the Cambodia immigration office and were in and out pretty quickly.  We were the first non-Thais to reenter the bus, which means we moved through quicker than those who pre-purchased their visas.

While we waited for the other passengers, I asked the bus attendant where we’d get dropped off in Siem Reap. Despite it being his job to take this route everyday, he claimed not to know. I even showed him a map on the iPhone and he couldn’t point out where we were to stop. He snickered to another attendant and I could see he was playing a game. More than likely, he was in on a kickback scheme where he would receive money from the tuk tuk drivers they let wait by the bus dropoff. If we don’t know where we are, we certainly can’t walk to our guesthouse. Additionally, these unscrupulous men may also tell you that the hotel you booked is shut down. (We were even told this by a driver as we were walking to our guesthouse later on!) Once they have you believing that your guesthouse is no longer open, they offer to drop you at their uncle’s/brother’s/friend’s not-so-nice guesthouse where they get a kickback. We knew our guesthouse was within walking distance and had a general sense of where the bus might drop us, so we forgot about it for a few hours.

The road in Cambodia is well-paved (and they drive on the right-hand side!). Our ride to Siem Reap was much smoother than the Bangkok to Poipet portion. Since there was a toilet onboard, the driver didn’t stop until our destination. Once we were inside the Siem Reap city limits, we followed our route on a map we downloaded to the iPhone. The bus stopped outside of a travel agency office. Surprise surprise. 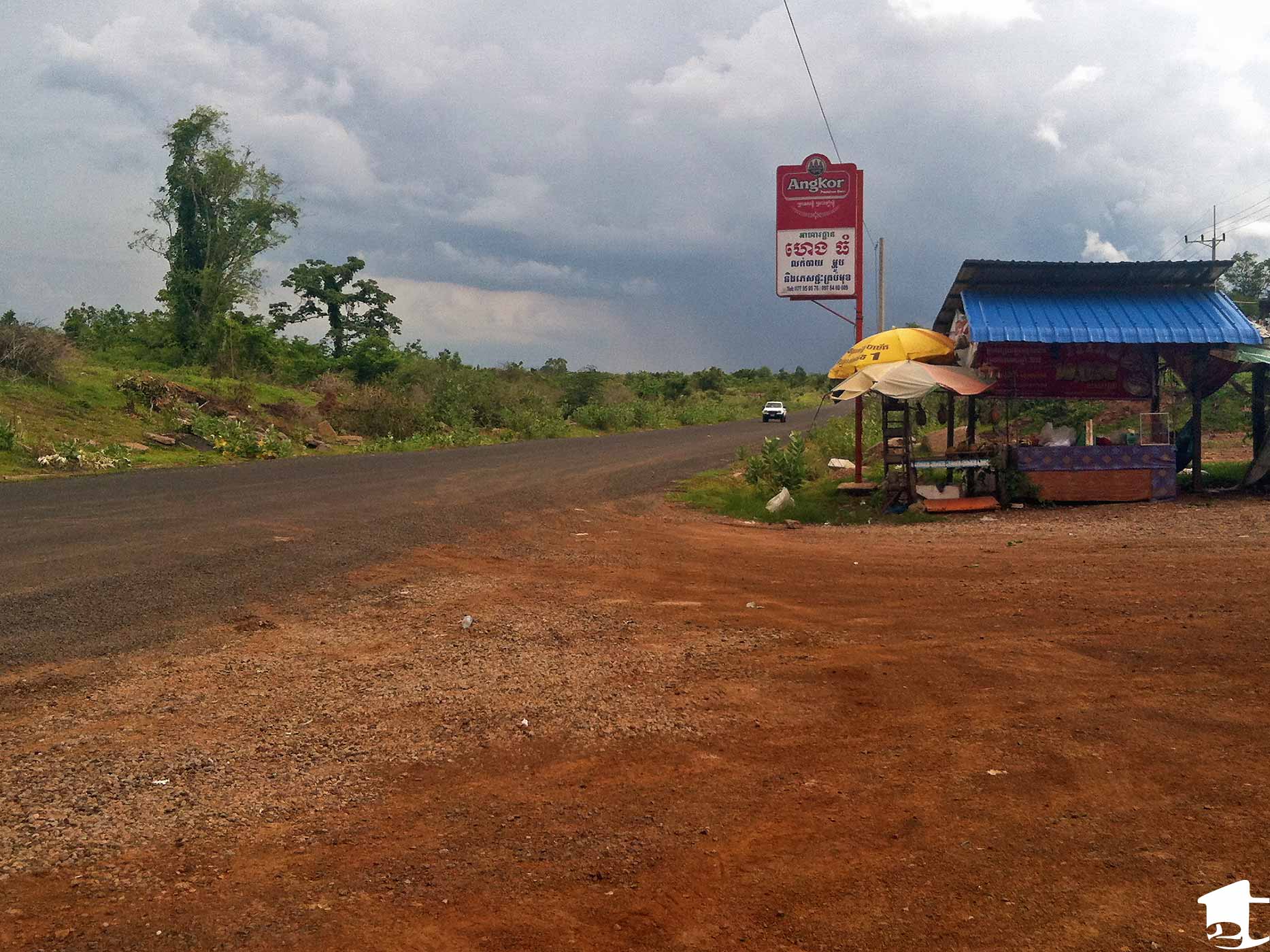 A paved road in Cambodia.

Nonetheless, we were quite close to the guesthouse we pre-booked and decided to walk. When everyone rose to exit the bus, the attendant came in and announced that we must stay onboard until they brought all luggage inside the office. He said they could arrange hotels and tuk tuks for everyone. Mike wasn’t in the mood for more of the same and told him we just wanted to grab our bags and walk down the street. But he wouldn’t let us off. “This is also for your safety,” he lied. “This is a very busy sidewalk and we don’t want all the tuk tuk drivers getting in your way.” We looked out the window to an empty sidewalk, then back to the attendant.

When the attendant did let us off, we darted into the office hoping to get away from the scene as soon as possible. Grabbing our bags we had to squeeze our way out of an overcrowded room. Back on the large, deserted sidewalk, we were met by men trying to whisk us into tuk tuks. “We’re walking,” we told them.

All in all, the experience wasn’t too bad since we were well-prepared for their scams and tricks. Besides not liking to be taken advantage of, we try our best not to feed an already corrupt system. We like to think that if more people stood up for themselves this wouldn’t happen. That might be unrealistic, but it’s still best to be a smart traveler by researching these things ahead of time. 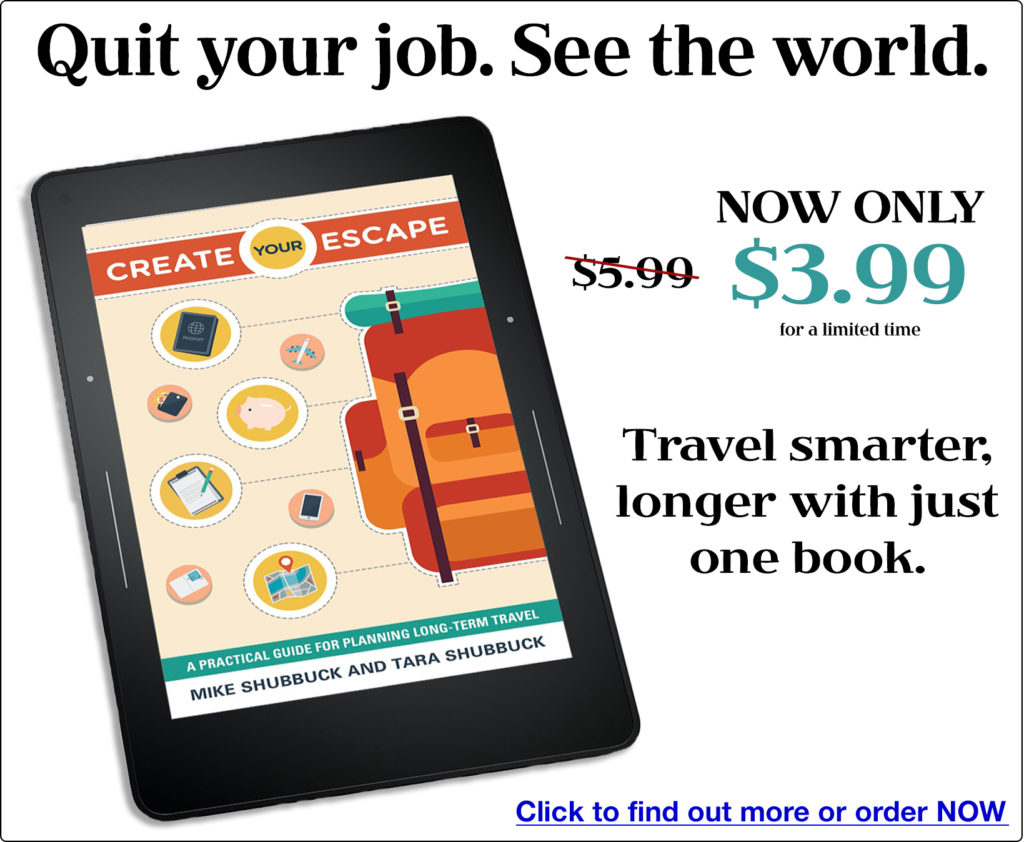